“Cool heads cross rivers. Hot heads drown,” Thomas sagely notes during this week’s 1883. And before the hour is over, a hot head nearly takes one of the Duttons to a watery grave, as well.

Read on for the highlights of “The Crossing.”

NEW LAND, NEW YOU | The hour chronicles the group’s efforts to cross Texas’ Brazos River, a task necessary to making forward progress on the way to Oregon. At the outset, Elsa’s voiceover makes it clear that she’s still loving her new life. “I looked at this place and saw my unfinished soul… I know what I am now: I’m a cowboy,” she says. To that end, she trades a gold charm from her bracelet for some pants and some tailoring work from one of the travelers; when she rides to her next cowboy shift looking like a proper cowgirl, Margaret acknowledges that the more practical clothes aren’t “the worst idea you’ve had,” but she’s a bit taken aback by her daughter’s form-fitting, slightly revealing (bare arms! gasp!) new clothes.

Know who likes the change, though? Elsa’s smitten cowboy crush, Ennis. A lot.

BRAWLIN’ ON A RIVER | But back to the crossing! James, Brennan, Thomas and Wade discuss getting across the river. Most of the Germans don’t know how to swim because it was outlawed back at home, and the water is much higher than ideal. James and Brennan have a minor pissing match during the convo, but eventually, the plan is set: They’ll start bringing the group and animals across in the middle of the next day.

As night falls, Capt. Brennan tells Thomas he’s shocked that the Germans haven’t quite the journey yet, given that their daily lives were so regimented by the government that they’re not accustomed to thinking for themselves. “The most terrifying thing on this planet is the unknown,” he muses, but James corrects him: “That’s because you ain’t never been whipped, Captain.” Fair point! 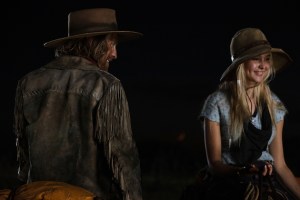 GIRL, YOU’LL BE A WOMAN SOON | After dark, James slips into the Dutton tent, wakes Margaret and informs her that their family is going to cross the river that night. “These folks are going to need help, and we can’t help if we’re one of ’em,” he reasons. She quickly agrees, and he rides out to inform Elsa.

When Papa Dutton arrives at the herd, it’s just in time to see Ennis — who is entranced by Elsa’s singing “Beautiful Dreamer” to the cows — kiss her. “Do it again,” she says, smiling, unaware that her dad is nearby. Once James has made his presence known, and it’s been ascertained that he’s not going to shoot Ennis, Elsa pulls him aside and wonders if he’s mad at her. “I can’t treat you like an adult when it suits me and a child when I’m worried,” James says, which… is not how I thought this conversation would go. Margaret, however, is going to be a different story, he warns her. Then he tells her to be careful when crossing with the animals the next day, and leaves her to get smooched a whole lot more. 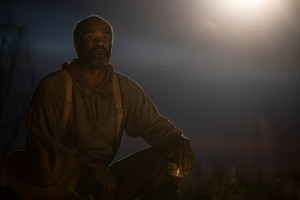 THE CAMP PREPARES | Back at camp, Noemi feeds Thomas and is a little flirty; he warns her that marrying a Black man won’t be the end to her problems that she thinks it will. But it’s clear that she’s very grateful for his help, and she actually enjoys his company, so they sit together while he finishes his supper. Over in Josef’s tent, he reassures Mrs. Josef that Oregon will be “paradise,” and they are so into the idea of starting a family in their new land that they get the process underway right then and there. (Side note: At this point in my notes, I write, “She’s a dead woman, isn’t she?” But I am proven wrong by the end of the episode, and thank goodness for that.)

The Duttons, minus Elsa, make it across just fine. It’s still scary, though. “This is harder than you said it would be,” Margaret points out, and she’s not joking. “I told you it was going to take everything and then some,” James answers. “You should’ve explained what ‘everything’ meant,” she shoots back, not placated. 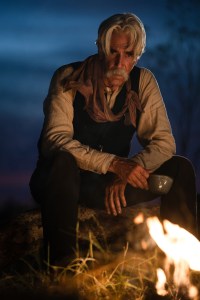 The next morning, Brennan wakes from a nightmare to realize that James is already across. But Papa Dutton yells across the water that he still intends to help. Perhaps in a bad mood because he hasn’t slept well, perhaps just because he’s Shea Brennan, the captain is less than delicate with his travelers as he informs everyone that the river rose overnight and they’ve got to jettison anything that’s not absolutely essential to survival. This means all of the Germans’ furniture, heirlooms, etc. have to go, and they are not happy about that. Or, as Thomas says to Brennan, “They gon’ hate you.” Brennan is unmoved. “They’ll still be alive to do it,” the captain replies.

One man, a musician by trade, must leave his piano behind; he cries as Josef tells him it can’t make the crossing. Elsa, Ennis and Wade find the instrument after everyone has left, and she plays Beethoven’s “Moonlight Sonata” while we watch a montage of the group fording the river. 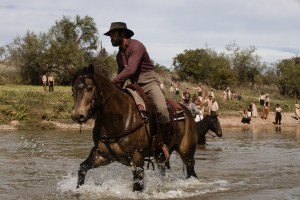 RIVER DEEP, MARGARET CRY | Those who aren’t in wagons or on horseback pull themselves across with aid of a thick rope that the Duttons put in place earlier that morning. But the current is strong and the terror is high, so a few people have to be fished out after their panic gets the better of them. And when Margaret tries to help a woman who got knocked out of her wagon, the woman’s hysteria is so high that she pulls Mrs. Dutton off her mount and nearly drowns her, as well. Eventually, Margaret has to make the terrible decision to push the woman away from her underwater in order to save herself. The woman dies. Margaret swims to shore and cry-screams her frustration.

Elsa, Wade and Ennis follow with the beasts after. As she sees the broken wagons and bodies left in the water, the teen finally seems to realize that their trip is not some romance novel come to life. Things are getting super real. And, as she notes, “No matter how much we love it, the land will never love us back.” She and James both ride past her mom, who’s still crying on the shore, and can someone please give Margaret a hug?!

Now it’s your turn. What did you think of the episode? Sound off in the comments!