Indianapolis Colts owner Jim Irsay is the type of billionaire who will quote long passages from Pink Floyd’s The Wall to you when you answer the phone. And even if you don’t pick up, he’ll still leave a voicemail parroting the monumental double-album’s whole “collect call to Mrs. Floyd from Mr. Floyd” routine. He’s a superfan who once stormed the front of the crowd at Chicago’s Soldier Field to get closer to the band in 1977, when they played their Animals and Wish You Were Here albums in full. And he’s the same music fan who, a decade later, cheered on David Gilmour when the singer/guitarist rolled by him in a golf cart backstage at a 1987 Indianapolis Floyd gig.

Now, he’s taken his fandom to its greatest height: Last week, he spent a record-breaking $3,975,000 at an auction on Gilmour’s famed “Black Strat,” the Floyd frontman’s instrument of choice on the band’s iconic Seventies classics. He also dropped $175,000 on the Pink Floyd–branded flight case that housed the guitar for decades and $1,095,000 for the 1969 Martin D-35 Gilmour used to record “Wish You Were Here.” When the sale was over, he bought nearly 25 percent of the nearly $21.5 million total the auction raised for Gilmour’s charity of choice, ClientEarth, which fights climate change.

“I just fucking love Pink Floyd, man, I cannot deny it,” Irsay tells Rolling Stone. “I think [Roger] Waters’ lyrics and Gilmour’s playing and their whole story and prominence is just so profound that I cannot say enough about my excitement for this. … David Gilmour stands by himself.”

Irsay established himself long ago as a connoisseur of cultural and rock & roll artifacts. He owns guitars that once belonged to Elvis Presley, John Lennon, Prince and others, as well as Jack Kerouac’s original “scroll” manuscript for On the Road and an original printing of the book Alcoholics Anonymous. He fondly remembers getting into bidding wars with the late Microsoft cofounder and fellow guitar aficionado Paul Allen, and he still radiates excitement when he talks about purchasing a pillar of rock’s fabric like the Black Strat.

Still, when he was bidding, he never expected to set the record for the most expensive guitar sold at auction, surpassing the heavily autographed “Reach Out to Asia” guitar, which went for $2.7 million in 2005. “I didn’t think it was gonna break all the records and go where it went,” he says. “It’s a good thing, of course, that the market is trending upward, but I was just taken by surprise.

Interest in the auction was high; it lasted eight hours and people from 66 countries registered to bid. Irsay did his bidding through a proxy, Larry Hall, and even though he wasn’t in the room, he was surprised by the level of interest in the event, which included 127 guitars and amps. He chalks the record numbers up to a heavy interest in Pink Floyd worldwide, a booming economy and the fact it was all for charity. “I knew after the ‘Wish You Were Here’ acoustic went for [$900,000] that it would be a record-breaking auction,” he says, citing the guitar’s “hammer price.” (The higher number above reflects additional fees that come with bidding.) “It was really off-kilter. I was like, wow. Why on Earth and how on Earth? But Floyd internationally is a powerful thing.” 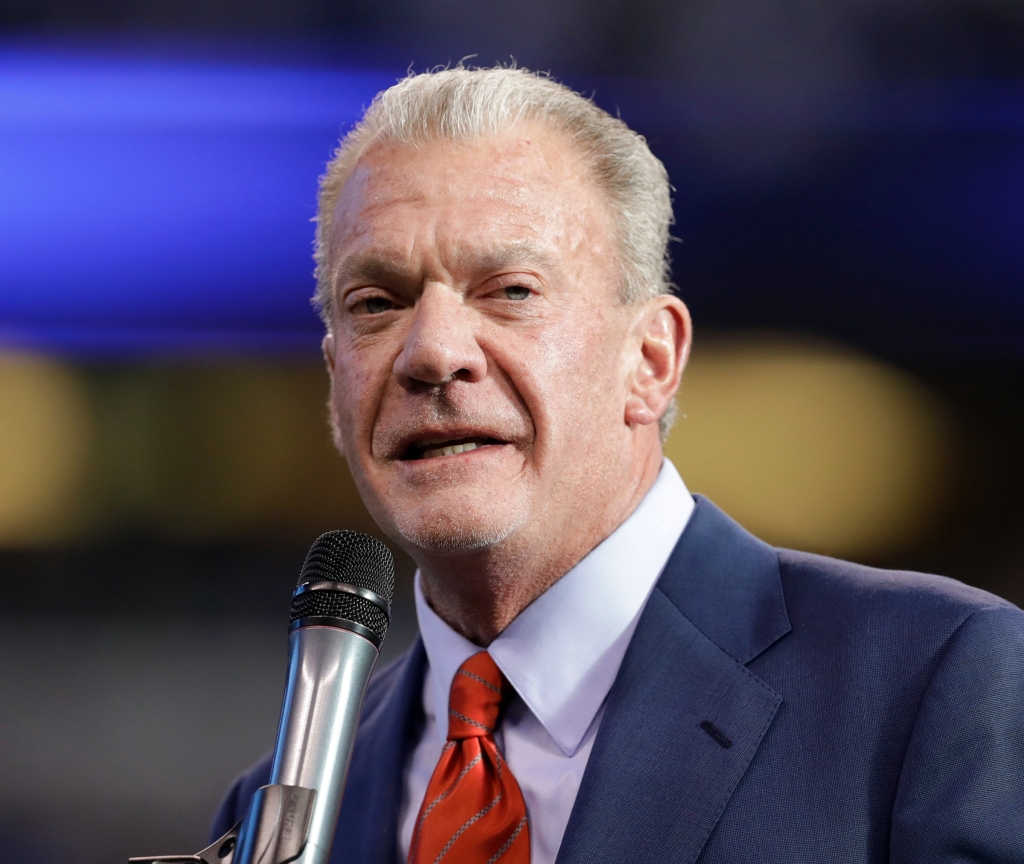 He almost walked away from the Black Strat when bidding escalated quickly in the hundreds of thousands. He compares the bidding war to Ali and Frazier’s famous fight. “I was trying to slow down this opponent, and he just kept coming,” he says. His final bid was for a hammer price of $3.3 million, but he says if it went higher, he might have abandoned it. “If someone had gone to $3.4 [million], maybe I would have had one last effort at $3.5, but I don’t know,” he says. “Bidding is an intuitive thing. There are so many things that go into that zen mode, and, as they say in Caddyshack, you have to become the ball.”

He knew that once he had bid on the case, which went on the block just before the guitar, that he had to go through with getting the guitar. “If I don’t get the guitar, I’ll look like a jackass,” he says, laughing. “But I love Strats, and this is the Strat. This is the one that was the signature guitar for those incredible Floyd leads.”

In an interview with Rolling Stone earlier this year, Gilmour said parting ways with the Black Strat didn’t bother him so much. “You know something? For me, I can let go of it,” he said. “It’s going to bring a lot of people to have a look at this sale, and it’s going to do that job. It’s a lovely guitar. … It’s on so much stuff, but Fender have made replica ones that they sell, and I have two or three of those that are absolutely perfect. One of those might be my future guitar of choice or even, horror of horror, maybe I’ll even change the color.”

Now that the real Black Strat belongs to Irsay, the Colts owner is looking forward to playing it. But he says he remembers when he got Elvis Presley’s guitar he was “playing it a shitload” and started thinking, “You shouldn’t play the King’s guitars so much.” Nevertheless, with the Black Strat, “I’m definitely going to be getting some notes out of it, man.” He recently tracked a version of Tom Petty’s “Something Big” with some of his rock-star friends, and he’s looking forward to playing the instrument with his Super Bowl Band.

“We’re gonna have to do something to get the Black Strat to scream a little more before it’s all said and done, but it really holds a special place in the collection,” he says. “It truly is part of rock & roll history, the likes of which will never be seen again.” In addition to playing it, he hopes to display it in a museum he’s planning to show off some of his rock & roll artifacts.

His want to preserve things like the Black Strat also ties into the auction itself, since his money will be going to ClientEarth. Irsay says it’s “tremendous” that Gilmour would attach himself to that charity. “It is so soothing that someone from rock & roll would want to participate right in the center aspect of helping planet Earth,” he says. “God knows we need it. It’s a very serious topic, so I think it’s a wonderful thing. And very seldom do you see the likes of literally $20 million raised for something like it. That is significant capital towards a cause.”

But of course, for Irsay, it’s win-win. He hasn’t yet spoken with Gilmour about the sale, but he’s simply happy he was able to help the planet and own an instrument he once saw live onstage in 1977. “It was the big fish that didn’t get away,” he says. “We all remember the big fish that did, but this barely didn’t. This is something, man. This was worth the price of admission.”