You can tell big thinkers by their notebooks. No pocket Spirax for Olympia. No handbag Moleskine. "This is one of six," she says, hoisting a hardback sketchpad the size of an elongated LP.

The cloth cover is dirty, the spine in shreds. "I guess I trust you," she says, heaving it over the table without fear. "The album's out there. I can't take it back." 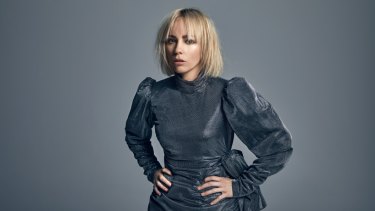 Olympia is armed with new album Flamingo, her follow up to 2016’s critically acclaimed Self-Talk.Credit:

"Here I'm trying to use words that aren't mine," she says. "This is me trying to write lyrics. Revision, revision … This is in the studio. 'Album, voice, character'. I tried to sing everything as a character. 'Don't inch to the character', she reads. 'Balls out'."

It's been that way for Olivia Bartley since she adopted her mythological moniker with her AMP-shortlisted Self Talk album in 2016. From Melbourne to the world four times, she backed up its godlike implications with shows of stunning power.

The art-rock debutante hit the stage with high heels, big hooks, the occasional silver spacesuit and the kind of electrifying guitar work that made blokes get all sulky on her socials.

From here, it seemed like a fabulous triumph. The fact she did it all without a manager adds to the Olympian enigma.

"I wish I'd had more … fun," she counters with a laugh. "There were many tearful episodes of missed flights and thousand-dollar mistakes. You know those rocking mechanical bulls? It felt like that. In retrospect I can see it was an incredible album and it was received so well but I was just hanging on for dear life.

"You know, when you write, that's quite a masochistic period of self-sacrifice. And then you're away performing. So you're always a terrible friend."

There's another peal of laughter here, but it’s offset by the subtext of the album. "Flamingo is referencing a personal tragedy," begins Bartley's accompanying manifesto, "the addiction and subsequent loss of someone very close to me."

Just don’t call it a record of catharsis. "I really resent the simplicity of that," she says. "It's like, 'Is it all better now?'"

"There should be emotion but there should also be innovation and ingenuity. Burke [Reid, producer] and I would constantly ask ourselves in the studio, 'Is this new?'

"So yes it's personal and yes it's deep. I had to allow myself to use words like 'heart'. That word. I really hate it when people say their heart is their driving force, but I stepped into that. It all comes down to love."

It's how you get there, though, that makes an emotional experience into a work of art. Even if she lugged in all six sketchbooks, we'd only scratch the surface of that trip.

Bartley grew up "pretty rough" in Wollongong. "Lots of murders," she says. Friendly prostitutes. HIV. Corrupt cops. Shady gamblers hanging 'round the Bulli Trots. "All these extraordinary things were normal," she says. "Church was a nice place to go."

There she learnt to play several instruments: the first step into a parallel world of art in all its many disciplines and theories, leading to a degree in design at Canberra Institute of Technology.

It's an intense experience, to really meditate and focus on somebody…

Talk about her work sparkles with references to others' that goes way beyond the checklist of musical influences — TV On The Radio, Nirvana, Eagles of Death Metal, PJ Harvey, Phil Spector, Yeah Yeah Yeahs, Beck… — that meanders down one page of her scrapbook.

The photographs of Elaine Constantine and Alex Prager are no less entwined with Flamingo's DNA. The poetry of Mojave Indian Natalie Diaz, the documentaries of Adam Curtis, the paintings of Jackson Pollock, an essay by Jim Henson and books by Richard Dawkins, Maggie Benson, Olivia Lang and Stan Grant pepper her conversation like rabbit holes. 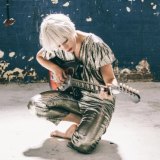 Olympia did four overseas tours between her last album and new album Flamingo.Credit:

"I would rather live in these books. It’s such a challenge, moving around out here," she says. "You've got to live in the world and catch the tram and talk to people and watch the news in the coffee shop. But for me, there's so much fuel and so much more compassion in art."

So what's with the flamingo? Like any work of art, the answer is in your face, but it beckons as deep as you care to go. "It's a word that's so loaded, visually. It is owned by the colour," Bartley begins.

"But you know, you can never actually see a thing. The eye only sees the light bouncing off the thing. You could say this record is about a person but it's really about, well, the emotional image.

"A portrait is about love. That's something I took from Francis Bacon. And I didn't realise that until right at the end. It's an intense experience, to really meditate and focus on somebody like that."

She suddenly recalls the advice of a mentor from her design studies in Canberra. "She said, 'Olivia, you are so curious. What you need to do in your life is to go sit somewhere and dig'.

"It's been the best advice. I should probably learn to stop. But that's what songwriting is for me."

Flamingo is out today. Olympia plays the Corner in Richmond on October 5 and Oxford Arts Factory in Sydney on October 11.