Sam Lutfi used to work as Britney Spears’ manager. The two were close for a period of time before Spears’ conservatorship was put into place. While some believe the two dated, others think they just became close friends, spending a lot of time together and what not, according to Oxygen. However, things appeared to sour between the two, and Spears’ family filed a restraining order against Lutfi in 2008 (the same year the conservatorship went into effect). Fast forward to 2019, and Spears’ family re-upped the restraining order. Spears’ father, Jamie Spears, told the court that he was worried that Lutfi was “trying to take down the conservatorship,” according to USA Today. Lutfi had joined in on the “#FreeBritney” movement, and claimed that Britney Spears contacted him on more than one occasion in regard to her father’s control. “She wanted help to get out of this situation,” Lutfi said in court at the time.

While Lutfi may have had good intentions, the judge overseeing the case granted a 5-year restraining order, according to USA Today. That restraining order prohibits Lutfi “from contacting the singer or her family or making disparaging statements about them online.” On July 14, Lutfi took to Twitter to share his thoughts on Spears, before and after her conservatorship hearing in court. Keep reading to find out what he had to say. 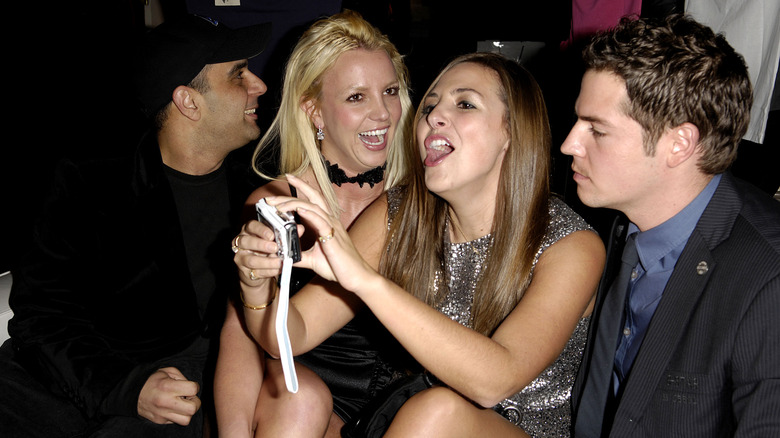 Ahead of the conservatorship hearing on July 14, Sam Lutfi took to Twitter to apologize to Britney Spears. “Just sitting here listening to that court recording, if she hates me after she’s free I won’t blame her… I failed her, I was supposed to protect her from all this, I let her down and we both paid dearly for it…head in hands… I’m so sorry,” Lutfi tweeted. After the hearing — in which Spears was granted the right to hire her own attorney — Lutfi posted to Twitter again.

“This is a premature celebratory post but for now there’s a new sheriff in town and heads are about to roll. The war may be coming close to ending but the healing is a tremendous journey that has yet to even begin. God bless the entire army. I love all of you,” Lutfi captioned a video of himself saying, “Finally. She did it. Finally.”