Someone previously posted on Twitter a photo of a sign from the Stoneleigh P bar in Dallas, announcing that ‘All I Want for Christmas Is You’ will be skipped if played before December 1.

AceShowbiz –Mariah Carey has responded to a Texas bar which thinks it’s too early to play her most iconic Christmas song. Instead of feeling offended, the “All I Want for Christmas Is You” hitmaker poked fun at the ban.

It started after someone posted on Twitter a photo of a sign reportedly from the Stoneleigh P bar in Dallas. The post, which has gone viral, saw the sign regarding its jukebox that read, “Mariah Carey’s All I Want for Christmas Is You will be skipped if played before Dec 1. After Dec 1 the song is only allowed one time a night.”

The picture went more viral after one Twitter user retweeted it. “is this the war on Christmas I’ve heard about?” so the user wrote in the caption. Mariah caught wind of the new post and joined in the fun with her hilarious response.

The singer replied to the post with photo of herself in a 2015 ad she shot for the mobile video game “Game of War.” The snap saw her donning a battle armor holding a sword. Not stopping there, the music icon also posted a video of herself smashing jack-o’-lanterns with a candy cane bat to show that “it’s time” for holiday season. 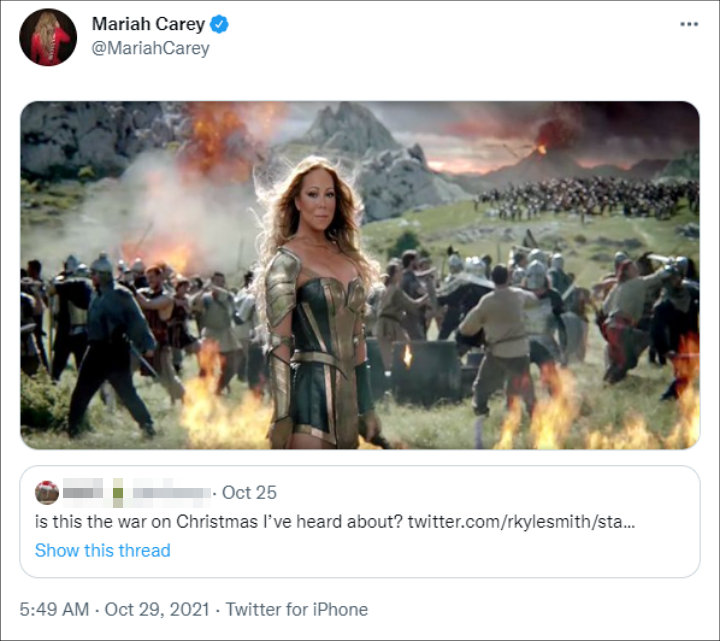 She explained that the rule was made because the song was getting played too frequently, much to staff’s annoyance. The manager also noted that the sign was meant to be a joke, adding that it had been put up in the bar for the last few years.