Love Island winner Dani Dyer has given up boozy nights out to focus on her TV career.

Her fellow Love Island stars are regulars on the celeb party circuit and her dad Danny, 42, is famous for his wild nights out.

But Essex lass Dani, 23, is shunning all of that to give herself a shot at making it big.

Her latest project was filming the new series of MTV’s True Love Or True Lies as its presenter.

Dani told the Daily Star Sunday: “Doing this show was a big opportunity for me. I was feeling the pressure because I wanted to do a good job.

“We went out to Malta to film. It was amazing to be there for work. But I didn’t go out.

“There was no partying for me at all. I was definitely away for work, not pleasure!

“I wanted to focus on the job and give it my all. Doing this show was my first proper job and I didn’t want to let anyone down.”

Dani’s dad Danny also features doing the voiceover on True Love Or True Lies. And he was on hand to give her advice and tips before filming started.

The EastEnders actor has been in the spotlight for 25 years and has plenty of experience in front of the camera. Dani said: “My dad is always only a phone call away. Before I went to Malta he told me, ‘Go and give it your all and smash it!’

“That was basically all of what he told me. But he did also say he knew I had it in me to do a good job. I know he’s really proud of me.”

The show sees a host of sexy couples moving into a villa. If they can prove they are the real deal they will win a cash prize.

While some of the couples do love each other, some of them aren’t actually together and will be faking it to win.

After her Love Island stint, Dani knows more than anyone about the pressures of being on a major reality show.

She said: “I know full well how scary it can be to live in that kind of environment. It can be so emotional and everything is heightened.

“I think they were all scared of me at first. But I wanted to make them feel like I was their friend.

“I made sure I gave them a smile.” Dani’s work ethic has helped her career go from strength to strength.

Her next big project will see her working alongside Sharon Osbourne.

They are starring together in stage show Nativity: The Musical, which is touring the country in the run-up to Christmas.

Dani said: “I can’t believe I’m going to be working with Sharon. I’ve grown up watching her on TV. So it’s crazy that we’ll be working together.

“She’ll be playing my grandma in the show. I’m so excited. I don’t know if she’s seen Love Island but I’ll tell her about it if she wants to know.”

Since winning Love Island in July last year Dani has become one of Britain’s most talked-about reality stars. Her turbulent relationship with co-star Jack Fincham, 28, was played out in the spotlight before they split earlier this year. 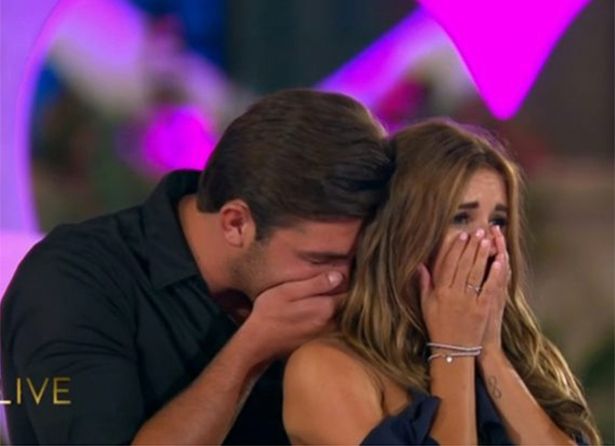 But she isn’t letting the downsides of fame upset her. She said: “You’re going to have good things said about you and bad things too.

“You just have to take it with a pinch of salt. Every day is a new day. If you’re going through a bad time you have to just focus on the fact that you’ll come out of it.”