The revamped Espy is now a microcosm of party life, with restaurants, sweaty dance floors and rowdy bars all heaving on this windy July Saturday.

The Gershwin Room at the rear was similarly packed for the sold-out Local Natives gig, and many punters perhaps wished they had tickets to see the band play at Splendour in the Grass the following day. 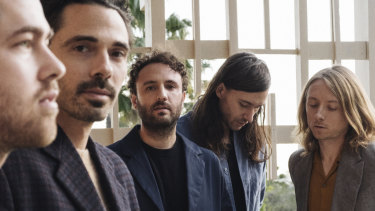 The band was described by music bible Pitchfork as having an “uncanny ability to embody the sound of a particular moment”, and indeed the songs from its 2009 debut Gorilla Manor send me rocketing back to an overseas holiday a decade ago. There's a certain intangible wistfulness to the music that is hard to shake.

The brisk 18-song set was mostly songs from new album Violet Street, peppered with the stronger earlier tracks, including Ceilings (from 2013's Hummingbird) and I Saw You Close Your Eyes. Coins from 2016’s Sunlit Youth offered a warm blast on a cold night, and new track Megaton Mile, “a happy song about the apocalypse”, galvanised the crowd.

Yet it was the old tunes that garnered the best response, with hits Airplanes and Sun Hands the most cohesive of the night.

While some of the songs tended to bleed into each other with a reliable “sameness”, Local Natives is a winning ensemble, as showcased by set-closer and latest single When Am I Gonna Lose You, which has all the appeal of the band’s early hits.