Stand Up for Heroes was started by ABC News correspondent Bob Woodruff after he suffered a traumatic brain injury while embedded with American troops in Iraq. Over the years, it’s raised more than $70 million for wounded veterans and their families. The annual fundraising show, which is part of the New York Comedy Festival, launched in 2007 at Town Hall and eventually moved to the Hulu Theater at Madison Square Garden. Last year, the show went virtual because of the pandemic.

Jon Stewart Roasts Aaron Rodgers
Most of the comedians avoided topical jokes throughout the night, but Jon Stewart kicked things off by roasting Green Bay Packers quarterback Aaron Rodgers over his recent anti-vaccine comments. “How the fuck does a quarterback not understand the concept of protection?” Stewart asked. “OK, Aaron, it’s prevention and protection. Let’s say you’re a vulnerable person, so you get five big … they aren’t even human, they’re like antibodies, like five of them. And you stand behind them and then one of them just says [to the virus], ‘I believe in freedom, so go ahead.’ “

Brandi Carlile Unplugs
Just two nights after playing Joni Mitchell’s Blue straight though at Carnegie Hall, Brandi Carlile returned to her own catalog of songs. Joined by her longtime bandmates Phil and Tim Hanseroth, Carlile performed unplugged renditions of “The Joke” from 2018’s By the Way, I Forgive You, and “This Time Tomorrow” from her new album In These Silent Days. “It’s an honor and a gift to have the opportunity to stand up for heroes tonight,” she said after taking the stage. “We’re going to send this one out to you with all the gratitude and love and redemption our hearts can hold.”

Donnell Rawlings Rails Against Masks
Nobody was allowed inside Alice Tully Hall without providing proof of vaccination, and about 90% of the crowd wore masks throughout the entire show, but that didn’t stop Chappelle’s Show and The Wire actor Donnell Rawlings from railing against face coverings. “All you motherfuckers got masks on,” he said at the top of his set. “I can’t wait until we get to the point of no masks. I’m so fuckin’ sick of these bitch-ass masks. For no political reason, I’m just masked the fuck out. … I’m sick of mask people going to non-mask environments and fucking the energy up. … Fuck your mask! I couldn’t wait to get the shot. That needle got halfway in my arm, and I took my mask and wiped my whole ass with it.”

Nate Bargatze Roasts Himself
Up-and-coming comedian Nate Bargatze earned some of the biggest laughs of the night by explaining in great detail why his wife Laura is “the man of the house.” “When she has to hire someone to fix something, they always come and talk to me since I feel like they’re used to talking to husbands,” he said. “I’m like, ‘I don’t even know why you’re in the house.’ We had our water heater break and the guy was talking to me about water heaters. He goes, ‘Where is it?’ I go, ‘I don’t know. I don’t know if we have one. Can we buy one from you?’ He was confused by that answer and was like, ‘Can I speak with your husband by any chance?’ I said, ‘Yeah, she’s right there.’ “

Nikki Glaser Gets Personal
Nikki Glaser spent 10 months of the pandemic living with her parents. She said she grew so depressed some nights that she started praying, though she had to hide that from her atheist parents. “I remember the day,” she said. “It wasn’t only Covid, but there were fires taking over America, the Beirut explosion just happened. All these things depressed me, and I just lost the back to this really cute earring that I had. I was like, ‘They don’t make these anymore.’ And so I just fell to my knees and I started praying. I really did. I’d never done that before, so I just did what I saw on 7th Heaven … Right then, this is not a joke, my mom walked in the room. … She just burst in and I was like, ‘Oh, my God.’ I was so embarrassed because in my household … she’d rather me be fisting myself. I chased her out the room and was like, ‘Mom. I wasn’t praying. I was blowing a ghost. He was sitting on then bed. We’ve been hooking up for a while now.’ “ 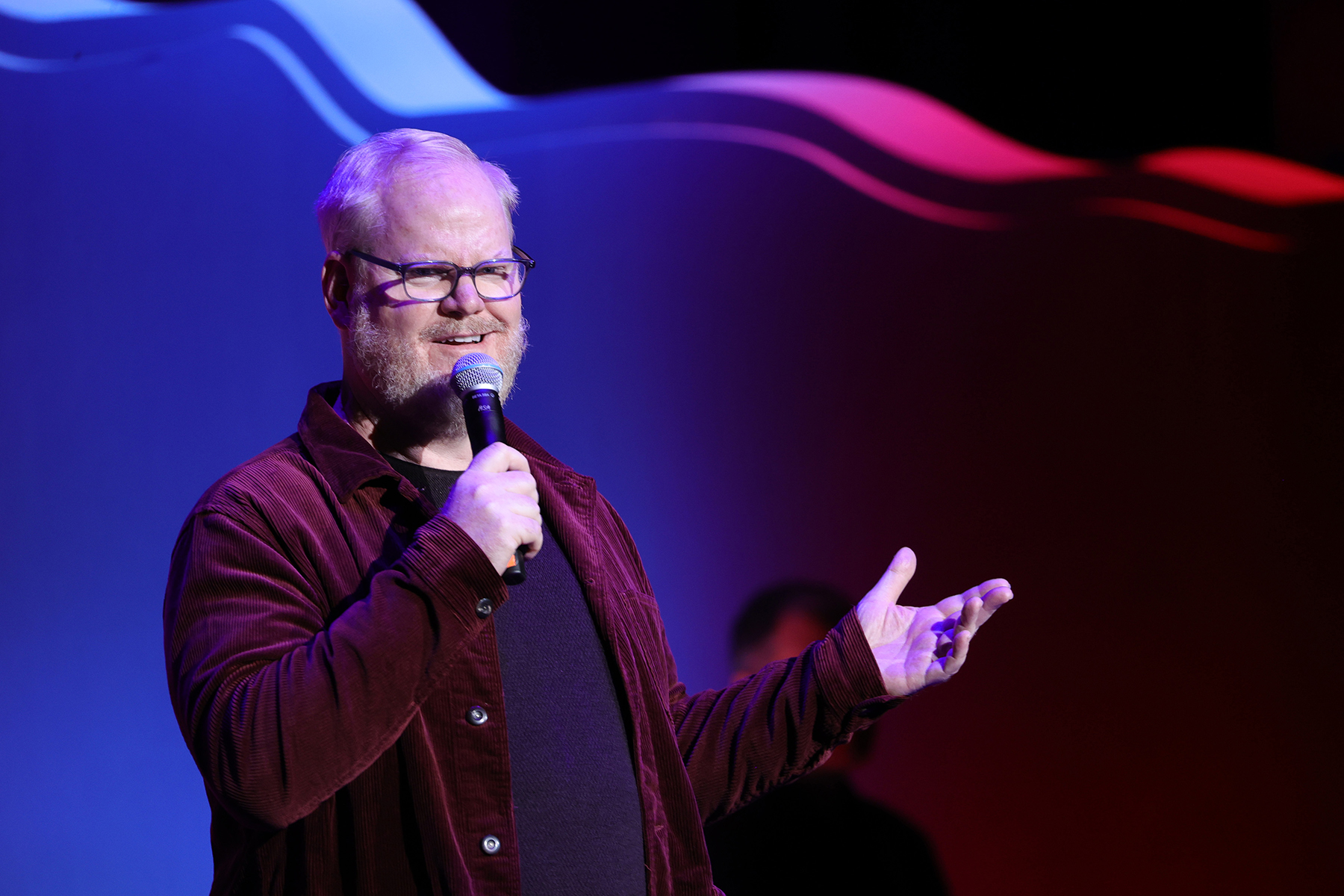 Jim Gaffigan performs during the 15th annual Stand Up for Heroes benefit at Alice Tully Hall.

Jim Gaffigan Delves Into Global Warming
It’s unseasonably warm in New York for November, causing Jim Gaffigan to find the humor in global warming. “Remember when weather was just boring?” he asked. “We were like, ‘Oh, it looks like it’s unseasonably warm.’ Now it’s like, ‘We’re all gonna die! There’s a flood coming! I can feel it!’ I don’t know anything about global warming, but it does seem like they stopped debating it. A couple years ago they were like, ‘There’s no proof the Earth is warming.’ Now those same people are like, ‘Well, what are you gonna do?’ “

Bruce Springsteen Debuts “Letter to You”
It’s been over a year since Bruce Springsteen released Letter to You, but he’s had very few opportunities to play the songs in a live setting. Amazingly, he’d never even performed the title track until this show when he broke it out solo acoustic. He opened with a slow, tender take on the Magic deep cut “I’ll Work for Your Love” before riling the crowd up with “Hungry Heart” and “Dancing in the Dark.” There’s still no word on a 2022 E Street Band tour, but this felt like a tiny preview of what might be in store.

The Boss Gets Dirty
No matter how many times he’s told dirty jokes at Stand Up for Heroes, there’s always something very odd about hearing Bruce Springsteen say the words “pussy” and “vagina” on a concert stage. It’s a side of him that he only lets out about 15 minutes a year. Every song in his set was preceded by a dirty joke, though the ones about the the dildo salesmen selling his boss’ thermos and the “voodoo penis” that attacks a police officer were from years past. The dirtiest one, however, was brand new. We offer the full text below for your enjoyment.

“A guy walks into a cathouse in Nevada. The guy says to the manager, ‘Mister, I’ve had a lot of different kinds of sex. I’m expecting something very special.’ The guy says, ‘No problem. Go up to room nine. Take off your clothes, get under the sheets, and just wait a few minutes.’ He goes to room nine, takes his clothes off, and about five minutes later, bang, the door flies open. An Amazonian woman is standing there. She says, ‘ I am Hurricane Hannah! Are you ready for sex with Hurricane Hannah?’ “

“The next thing the manager knows, the guy is running by him with just a sheet on. He goes, ‘Where are you going?’ He goes, ‘I couldn’t stand the weather!’”