Eighteen months ago, the idea that someone like Neil Finn – a well known musician and songwriter in his own right who had by no means put his feet up – could, or even would, join a band like Fleetwood Mac, seemed positively absurd. Perhaps it still does.

But on Monday as they touched down in Melbourne, the final destination in their Australian visit, the new-look band proved for the 72nd time (that's how far they are into this world tour) that swapping long-time guitarist, vocalist and songwriter Lindsey Buckingham for Finn was in fact a stroke of genius. 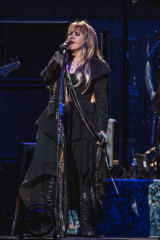 The first thing we saw on the screen above the stage was chimes – an instrument sprinkled all over the band's many hits.

Opening with Finn fronting The Chain may have seemed like an eff you to Buckingham were it not already the band's long-standing opening number. Finn took up the mantle with gusto. Sporting a messy quiff worthy of his younger days, it was uplifting to see him rock out like a pig in shit.

The punch with which he delivered the vocal line was surprising; this is a more forceful style than most of Finn's own songs. But he owned them by putting his own subtle spin on phrasings, ensuring he was no carbon copy of his predecessor. When you're Neil Finn, there's really no need for that.

Stevie Nicks, meanwhile, all but commanded the stage for the duration of the gig – even when she was not fronting. No surprises there. With trademark flowing black threads, playing air drums on her tasselled tambourine, the black magic woman had the 16,000-strong audience under her spell.

At 71, Nicks' distinctive vocals still cut through. She has modified some melodies to a lower register– notably in Dreams – but Finn, and two tucked away backing vocalists, carried the rest, ensuring no drama was lost. Nicks seemed to become both more ethereal and more animated as the night went on.

McVie's voice on the other hand, much mellower than Nicks', was all but swamped in the band's big sound. No one really cared: Everywhere was an invitation to sing along and dance in the aisles.

That Finn was the right choice for the band – at least here in Melbourne, where he wrote many of his hits and, we were told, where he got his first perm – was none more apparent than when the band launched into Split Enz's I Got You.

Can you call it a cover when the person who wrote the song is now in the band?

Let's be clear, this is Fleetwood Mac playing Split Enz. Can you call it a cover when the person who wrote the song is now in the band?

As if to answer, we had clips from The Bride of Frankenstein above the stage. The whole thing was brilliant. More Frankenbands, please.

Later, Finn would play Don't Dream It's Over, now with added sparkles (chimes) and met with swaying phone lights in the auditorium.

Of course, there's another new addition to the band: former Tom Petty and the Heartbreakers guitarist Mike Campbell, who delivered Fleetwood Mac's many soaring guitar solos with colour and precision. An encore of Petty's Free Fallin', to a photo montage of the late singer sharing the stage variously with Campbell and Nicks, was heartfelt and well received.

Even for a band with so many bangers, there were a few songs that felt like filler in the latter half of the two-hour set, including an extended Mick Fleetwood drum solo during which the rest of the band took a break (as did many in the audience). But the energy with which Fleetwood still thumps that kit more than 50 years on, and the pure, unadulterated glee on his face as he does it, says something about why this band endures.