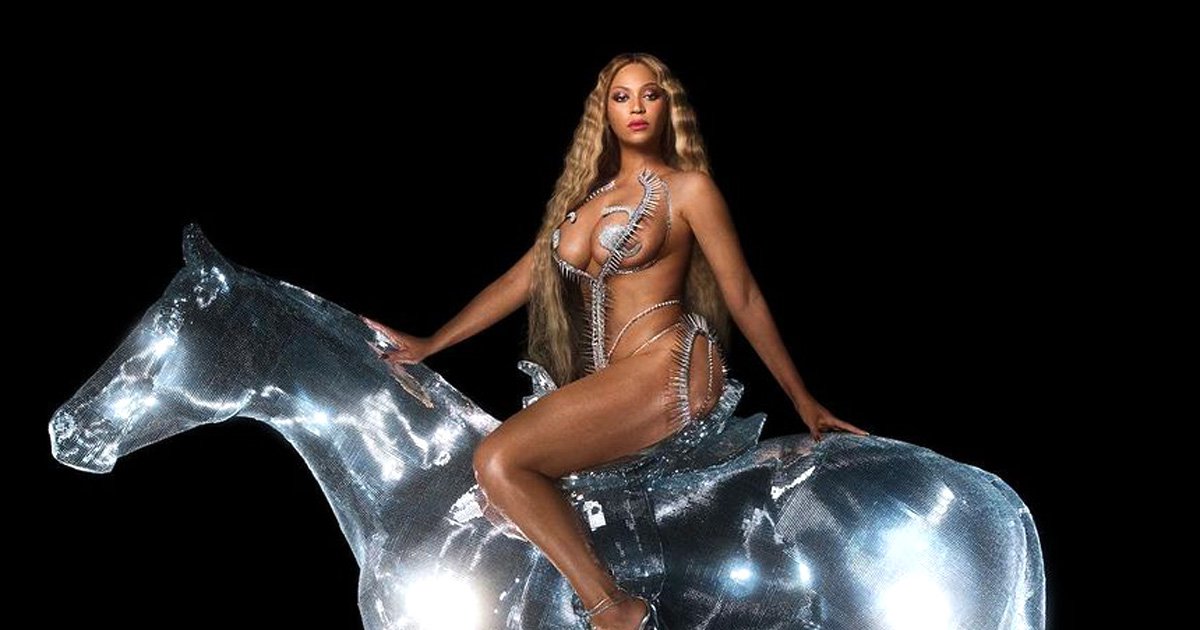 You know that evergreen Tiffany Pollard gif, where she’s all wide-eyed as the camera zooms and she exclaims ‘BEYONCÉ?’

Sure, it may have come from an argument on a reality show, but it’s become a symbol of excitement over our musical Lord and Saviour – and today, that symbol is all of us.

Yes, Renaissance is here, and as Beyoncé’s first canonical solo project since 2016’s Lemonade and her first ‘conventional’ solo album (i.e. not surprise-released, not only-available-via-TIDAL) solo album for quite some time, the anticipation is quite something.

Over the course of her solo career, Mrs Knowles-Carter has already mastered pretty much everything; from stadium-sized pop anthems to artistically ambitious, politically-charged visuals.

And now, the first chapter of what is set to be a three-album project has landed; bounding over the horizon and into fans’ ears like the high-camp disco-horse she’s straddling in the artwork.

Renaissance promises dancefloor-ready liberation, but does it deliver? Does it meet the hype, and the almost impossibly high bar Beyoncé has set for herself?

Let’s press play and find out, song by song…

1. I’M THAT GIRL
With a sample from Tommy Wright III and Princess Loko’s Still Pimpin’ over a tantalising bass wobble, we’re off – and as the tempo lifts and Bey purrs ‘I pull up in these clothes, look so good’, it already feels magnificent to have her back. Though sonically it may be more restrained than what’s to come, I’m That Girl is a mission statement; a declaration of the confidence and empowerment we’ll be served over the course of the next hour (‘It’s not the diamonds, it’s not the pearls… I’m just that girl’). And the way everything drops out on ‘let it begin’ as we head into the final minute? Oh, things are about to go off. Gals, gays and theys; get your stretches in now!

2. COZY
If I’m That Girl is the song to gear you up for the club, Cozy is what’s playing as you strut past the bouncers, into the throng and over to the bar. Trans icon (and beloved Drag Race guest judge) Ts Madison is among the samples on this; a track that finds defiance in the face of hardship. ‘Kiss my scars, because I love what they made’, Bey declares; later reaffirming on the chorus that she’s ‘comfortable in my skin, cozy with who I am’. All this over a gloriously filthy beat? Good luck trying to sit still!

3. ALIEN SUPERSTAR
‘Category: sexy bitch. I’m the bar’. Making use of Barbara Ann Teer’s Black Theatre speech, Alien Superstar is one hell of a life-giving, ballroom-ready extravaganza, and Christ, can you imagine the potential music video? The looks! The choreo! The drag! It simply must happen. And the way it even makes a Right Said Fred interpolation sound genuinely sexy? Witchcraft!

4. CUFF IT
Nile Rodgers is the guest of honour on this bright, brass-infused, timeless-sounding floorfiller; all lush backing vocals and breezy, uplifting instrumentation. Refreshing and intoxicating like a divine cocktail, it will – I suspect – only get better and better with every listen. Focxy Cleopatra lives on!

5. ENERGY
The transition into this song is so seamless you might not even notice it’s happened. Part interlude, part song in its own right, it’s a sub-two-minute treat that perfectly girds your loins for the almighty smash hit that’s to follow. Rapper BEAM is on top form as Bey drops some of the album’s most memorable lines (‘them Karens just turned into terrorists’) and as it gathers momentum towards the end, Big Freedia enters the chat and it’s finally time for…

6. BREAK MY SOUL
There was a lot riding on this track when it dropped as the lead single, and whew boy, did it deliver. It’s somehow even more exciting here, in the context of the full album – the most radio-ready, pop-skewing banger of the bunch; and still as exciting now as it was on first play. A fists-in-the-air ode to standing strong in the face of societal clownery, it’s an almost timeless, instantly familiar hit that will almost certainly feature heavily on ‘best of the year’ lists come December. Consider my wiggle released!

7. CHURCH GIRL
While we’re all gasping for air after Break My Soul, a sample of Center Thy Will by Clark Sisters lowers the tempo slightly – but don’t get too comfortable. Within a minute, the beat has dropped and Beyoncé has offered a lyric that shall inspire many a pre-night-out Insta caption: ‘I’m warning everybody, soon as I get in this party, I’m gon’ let go of this body, I’m gonna love on me.’ The glorious juxtaposition of heavenly backing vocals and instructions to ‘drop it like a thottie’ makes for a – yes, I’ll say it – truly religious experience.

8. PLASTIC OFF THE SOFA
The vibe of the production is absolutely sublime here – Beyonce sounds like an angel in her upper register, cooing over sumptuous percussion, a sunny guitar and an irresistible bassline. It’s perhaps the most chilled-out moment of the record so far, and even this is impossible not to bop along with. Red hot.

9. VIRGO’S GROOVE
There’s been a (divisive!) trend in pop music lately that’s seen stream-chasing bops made as short as possible; seemingly to capitalise on fleeting attention spans and generate more plays in less time. But Virgo’s Groove is the perfect antidote to that: at over six minutes long(!), it’s in no hurry whatsoever, and not a bar is wasted. A strong contender for the best vocal performance on the album (that last minute? I ascended), it bubbles like a glass of expensive champagne; every last drop, every last note to be savoured. An inevitable fan favourite.

10. MOVE
‘Move out the way’? Yes ma’am! Tems and Grace Jones (Grace Jones!) are on hand for this call-to-arms: ‘When the queen come through, part like the Red Sea’, Bey instructs. And even I, a lanky white guy with precisely zero rhythm, feel I could set the dancefloor aflame. It really – and I mean this as a high compliment – just sounds like sweat.

11. HEATED
Listen out here for a gorgeous tribute to Beyoncé’s late Uncle Johnny, one of the main inspirations behind this whole project. ‘He was my godmother and the first person to expose me to a lot of the music and culture that serve as inspiration for this album,’ she wrote in an accompanying message. The sheer DRAMA of the outro is the star attraction here, and it’s absolutely delicious; proving – just minutes after that angelic trilling on Virgo’s Groove – that there’s probably nothing Beyoncé can’t do.

12. THIQUE
We’re in trap territory for the first minute or so of this, but – oh! – there’s one hell of a bait-and-switch. Soon we’re back in the ballroom in the early hours of the morning, and this is Renaissance at its sexiest; packed with lyrics that will accompany many a thirst trap all summer long.

13. ALL UP IN YOUR MIND
Another gag-worthy transition takes us by the waist towards this filthy gem; begging for slo-mo dancing, strobe lights and sultry looks to camera. What initially had me thinking ‘hmm, perhaps this is one of the filler songs’ soon had me gagging for the nearest shoebox-sized, damp city club at 4am. A slow-burning serve.

14. AMERICA HAS A PROBLEM
Hands up if you saw the tracklisting and thought Beyoncé was back in explicitly political mode for this one? Not so! Taking its name from the Kilo Ali song it samples, it may not hit as hard on first listen as the rest of Renaissance, but is still an infectious, energetic number with a confident vocal delivery that’s at once commanding, cool and barely breaking a sweat.

15. PURE/HONEY
To listen to this intro is to hear God. No, scratch that – to listen to any given section of this song is to hear God. Yes, this is it, folks – this is the one! The masterpiece that will likely be an unshakable staple of Pride playlists for years to come; paying homage to Moi Renee, Kevin Aviance and MikeQ & Kevin Jz Prodigy along the way. It’s a stunning tribute to the Black queer culture that inspired it, but also a masterstroke in its own right. In its just under five-minute runtime it seems to reinvent itself multiple times, and every part is a triumph. Song of the album? Maybe so!

16. SUMMER RENAISSANCE
Oh, you thought pop albums tended to end with a whimper? Tended to be front-loaded? Tended to run out of steam and shove a little low-key ballad at the end? Not Beyoncé! Beyoncé casually ends Renaissance with two of the album’s best songs, and this titular closer – which references Donna Summer’s I Feel Love – is the perfect climax of the whole record; a hands-aloft, wind-machine-triggering, confetti-canon-beckoning anthem that keeps us dancing right up to the last second. When she requests ‘applause, a round of applause’, what she really needs is a goddamn standing ovation.

Renaissance isn’t a short album – and at 62 minutes, there may be some who wonder if a track or two could have been jettisoned to make it a little more concise and snappy.

But, as is the standard with Beyoncé, every last syllable, every last note, every last word has been thought-out and executed with precision: Renaissance is the big, blockbuster, energetic album this blazing hellfire of a world desperately needs, and the sooner its songs are heard on dancefloors, at parties, at gigs, in bedrooms, in cars with the windows down, in dressing rooms, and heck, even in supermarket aisles, the better.

And just think – this is only part one of three!