MUSIC
Australian World Orchestra
Hamer Hall, July 26
★★★★½
Drawn from the diaspora of Australian talent working in the world’s top orchestras, the annual homecoming of the AWO is one of the most highly anticipated events on the musical calendar.

In previous years, they have performed under the baton of megastar conductors – Ricardo Muti in 2018, Sir Simon Rattle in 2016 and Zubin Metha in 2014. 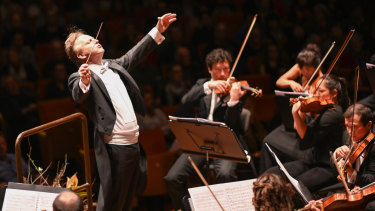 Alexander Briger at the helm of the Australian World Orchestra.

However, no one attending this year’s outing could feel shortchanged by the orchestra’s founding father, Alexander Briger, taking the helm.

While he may not boast quite the celebrity status of the revered elder statesmen who have preceded him, his powers on the podium are every bit as world class.

Briger is a wonderfully full-bodied conductor, scooping up the orchestral forces at his command in a bear hug of expressive physicality. This dynamism was reflected back across the concert platform, every muscle, tendon, sinew and synapsis of the assembled musicians spurred into action by their shared purpose.  Such nimble responses proved ideal for a program rich in narrative complexity.

Briger (much like his uncle, the late Sir Charles Mackerras) is a Janacek expert and revealed a keen understanding of how to draw together this music’s idiosyncrasies: its combination of literal sound painting and romantic allusion, its yen for extreme sonorities balanced with rhapsodic beauty.

The same detailed storytelling was applied to the Finnish vistas of Sibelius’ second symphony.

From the melancholy foothills of the opening’s major-minor uncertainty, to the summit of the final movement’s yearning grandeur, this was a performance of monumental vision.