It may not be the Marvel universe, but the One Chicago world is full of actresses playing real-life superheroes. For years, Kara Killmer, Marina Squerciati and Marlyne Barrett have starred as first responders on Chicago Fire, Chicago P.D. and Chicago Med, respectively.

In an exclusive conversation with Us Weekly, the actresses open up about what the powerful roles mean to them — now more than ever.

One Chicago Stars Who Left the Franchise: Where Are They Now?

“I don’t think toughness for women looks like toughness for men,” said Barrett, 51, who has starred in the medical drama since its 2015 debut.

Playing a nurse is an important role for her, as the “core” of her relationships outside of work are with real first responders — and she doesn’t take that lightly.

“I carry that truth as I’m going forward when I’m representing them,” the Wire alum said. “My mother was a 35-year nurse in Brooklyn. My father was a medical engineer. My sister’s a doctor. It’s a tough season right now. People have worked really hard. … It’s just so big that without teetering, you want to just stay the straight and narrow and tell the truth of the story that’s in front of you.”

She continued, “Dick [Wolf] takes the time. He represents the American person really, really well. … When I watch the other shows, I’m like, ‘Yeah. That’s the truth. There’s a weight to what we are doing.’” 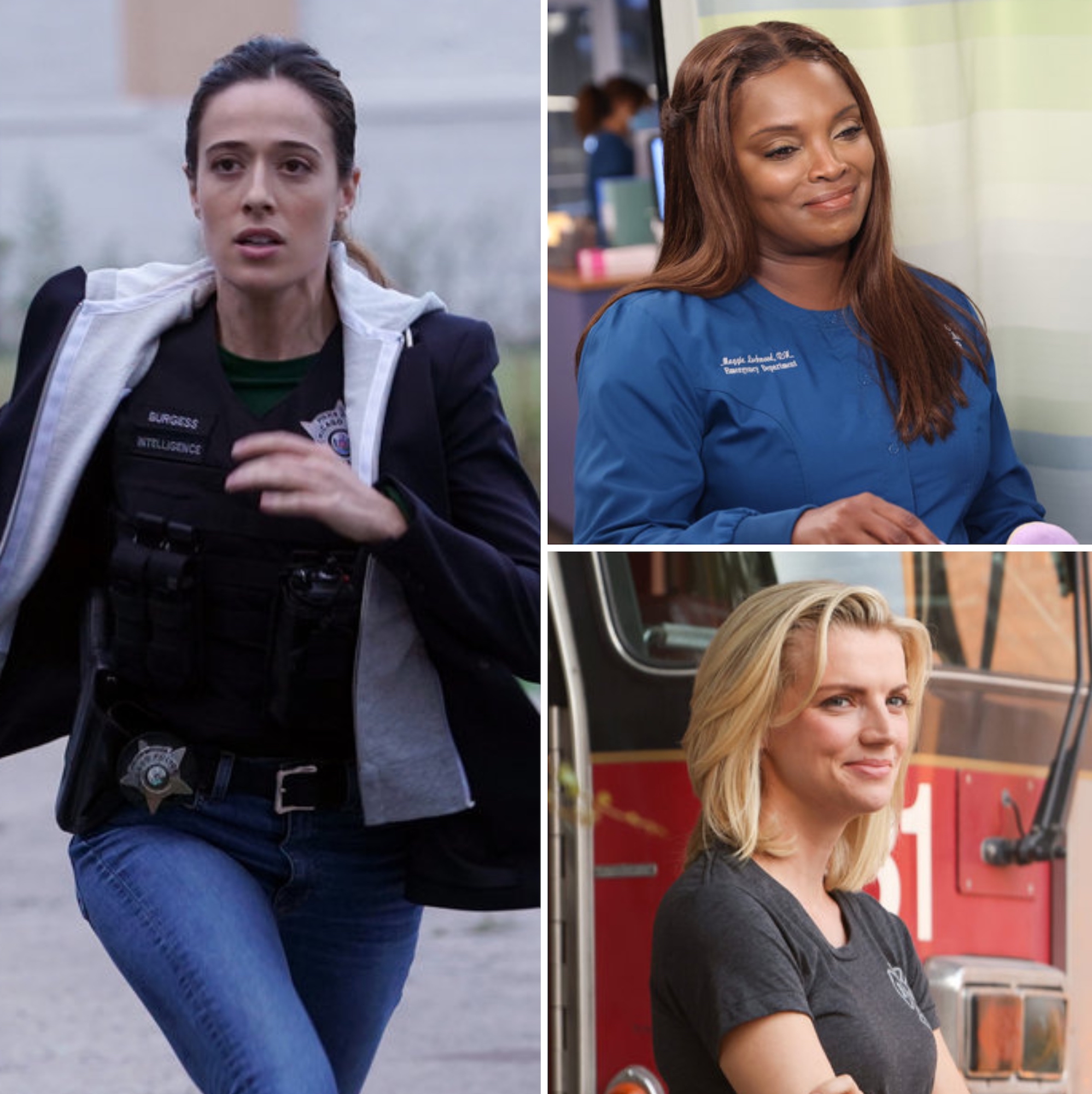 Killmer, who portrays paramedic Sylvie Brett, also feels that weight. “The challenge always is that we reflect and we edify the self-sacrifice and the hard work that everyone who put themselves in the frontline are doing,” the Jane by Design alum, 33, said. “It takes such a special person and such a heart of service to choose to keep going out there every day, and putting your life on your line or taking those risks.”

One Chicago’s Most Heartbreaking Exits

Not only was 2020 tough on the frontline workers, but it was also a turning point for police — something Squerciati, 37, has learned a lot about while portraying Officer Burgess.

“I’m on a cop show in a post-George Floyd world. It’s tough. What is my responsibility as an actor? As a part of this project, wanting to give credence and respect to people who are cops, who choose to put their lives on the line, run through the line of fire? And also give respect to people who are persecuted and not treated fairly by cops,” she explained. “Our shows kind of took a pause and a reset. … It is a television show so it’s not going to be perfect, but I’m glad the cops [on our show] live in a gray area. We’re not always right. That makes me happy. It’s not good-guy-bad-guy, because that’s not the world we live in.”

The New York native is also excited to start mixing her real-life experiences into her story line. Squerciati welcomed her first child in May 2017, and on screen, Burgess just adopted a daughter.

“She embraces her feminine side, [yet she] can take down a bunch of dudes,” the Gossip Girl alum said. “How do you navigate putting your best face forward for your kid when you’re suffering inside? Moms don’t get sick days, they don’t get PTSD days.”

All the Most Memorable One Chicago Couples

During the panel via Zoom, she even had to exit the frame to take a banana bread out of the oven.

Barrett laughed and responded, “That should be the tagline of this interview. ‘And I’m also baking banana bread.’”

Watch the full exclusive panel above and pick up the latest issue of Us Weekly on newsstands now.

One Chicago begins on NBC Wednesdays at 8 p.m. ET.