Why I chose not to have children: Woman, 47, reveals how her decision not to be a mother left her with an ‘overwhelming sadness’ that she didn’t provide her parents with grandchildren

As I looked at my mum, Patricia, cradling her newborn granddaughter in the hospital, I felt a rush of emotions. Finally she had the grandchild she’d longed for, and I’d never seen her so happy.

I was proud, elated and excited, but as the tears streamed down my face I also felt an overwhelming sadness, because this beautiful, perfect baby looking back at my mum wasn’t mine. She was my niece, the child of my brother and his wife.

They had made my parents’ dream come true — something I was unable to do for them.

What’s more, it wasn’t that I’d tried, and failed, to have children, as is so often the way in too many heartbreaking cases. That would be something any parent could sympathise with, a set of unfortunate circumstances entirely out of my hands. 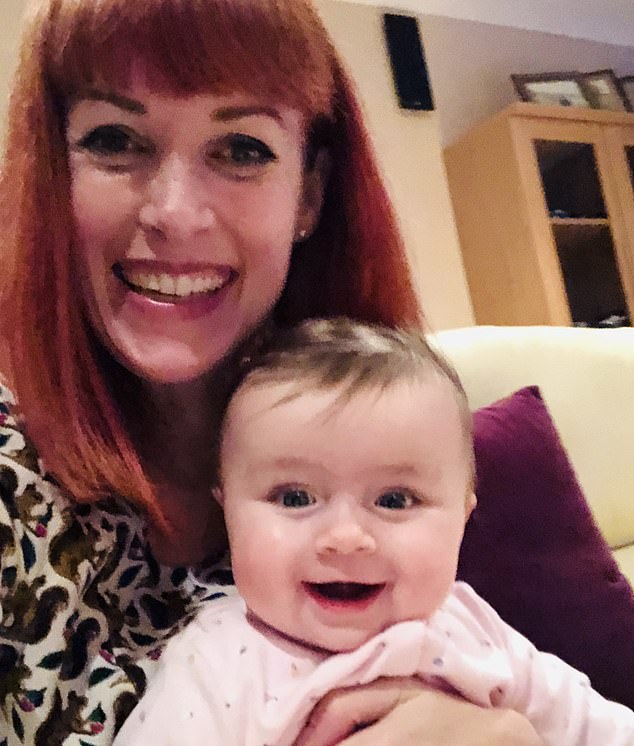 No, the truth is I chose not to be a mother. I chose to deny my parents the joy of being grandparents to my children, and that is why those tears fell so steadily.

There would be a special bond now between my sister-in-law Kelsey and my parents — one that I could never experience: the intimacy of motherhood.

While I’d never wavered in my conviction that children weren’t for me, I was stunned by how deeply this affected me. So what had led me into this intense, bewildering emotional maelstrom?

When I met my husband, Gautier, in 2007, I told him on our first date that I didn’t want children. I was 35 — the age most women’s ovaries are at full throttle.

Within the previous year, most of my married friends had become mothers, and many others who were single were turning to IVF or donors and having a child on their own.

It was akin to something tribal, this primitive need to procreate, the results of which divide those who have from those who have not. Often it will put friendships under strain, and sometimes it will end them completely.

Surrounded by pregnant friends, those with toddlers or those who cried themselves to sleep at night wishing they were mothers, I felt like an outcast. I had never experienced that ‘baby hunger’ so many women have.

The closest I got to considering becoming a mother was in 1999, when I was head over heels in love with a man who ‘absolutely, definitely’ wanted children. I had fleeting notions that I might consider having a baby. Just one, and only with him. 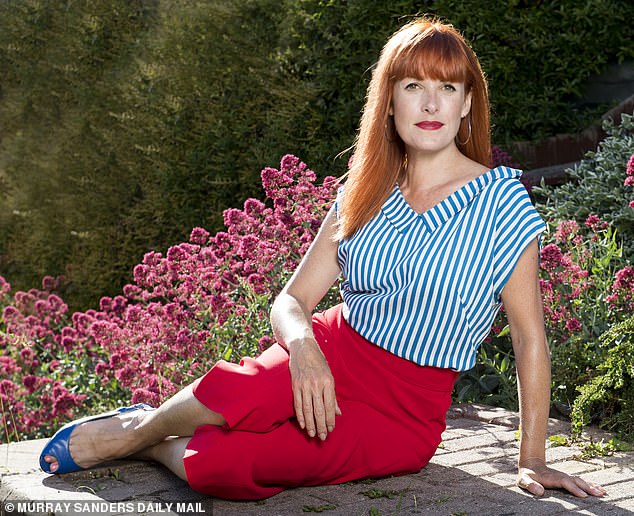 Ms Wills (pictured) told her husband, Gautier, in 2007, while on their first date that she did not want children

I never got to make that decision, though, as he left me for someone else four months into the relationship, got engaged while I was still mending my broken heart, and promptly had two children with his new wife.

He never told me why he wanted to break things off, and I always wondered if it was because I was so vehemently opposed to having a child.

It turns out that Gautier had reached the same conclusion about parenthood as I had long before we’d met. He had never wanted the responsibility of looking after a child. He was 29 and a musician.

Like most musicians, he didn’t earn much and spent the majority of his weekends travelling to gigs with his band, staying up late, then sleeping all day.

He enjoyed his freedom and had a great social life. He travelled the world and had nobody to answer to. I’m not the kind of woman who would ever ask a partner to give up the things that made them happy.

He proposed two weeks after our first date, on his 30th birthday, and we were married at the Brighton Pavilion six months later. Over the past 13 years our marriage has been everything I’d hoped it would be — we are very happy.

We just don’t have children. 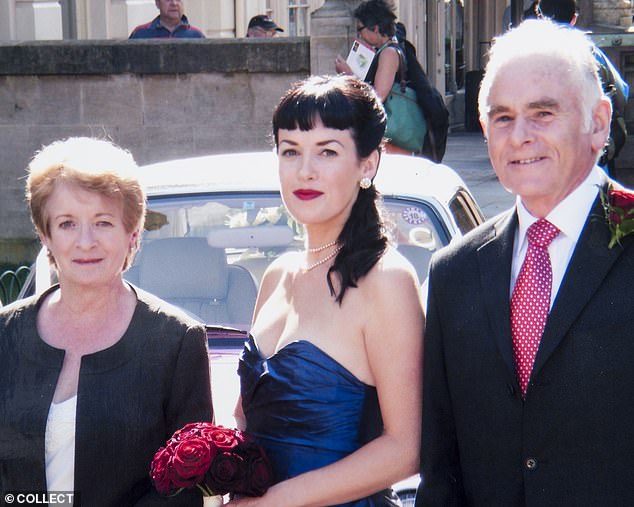 Over the years, as the element of choice concerning our child-free marriage slowly ebbed away, I’d occasionally ask Gautier, now 43, if he’d ever changed his mind about being a dad.

He paused, once, and my heart skipped several beats before he replied: ‘No, not really. I don’t think so.’ Given that he finds looking after plants too much of a responsibility, I think he’s telling the truth.

Even if he did feel differently, I have enough confidence in the strength of our relationship to think he would sooner stay married to me than have babies with someone else.

Besides, choosing not to be a mother is no longer as unusual as it once was. The Centre For Research On Families And Relationships reports that one in five women choose to be child-free, a term I prefer over ‘childless’.

That has negative implications which I hate — like ‘homeless’ or ‘hopeless’ — it suggests that a child is missed or lost, or that I am ‘less’ in some way.

I don’t feel loss at not having had a child. My feelings are vastly different from those of a woman who cannot conceive, but is desperate to do so.

I made my ‘no babies’ decision at 17, as soon as I became sexually active. It went way beyond any dread of an accident. It developed into a full phobia. The idea of a living thing moving inside me and needing to come out terrified and repulsed me.

I’m pretty sure that fear stems from being shown a video of childbirth at school when I was ten. I ran out of the class in hysterics and announced to my mum that I’d seen ‘a horrible video of a woman having a baby; the baby was dirty and it was disgusting’.

Knowing that I took an impressive 36 hours to exit my poor mother (I was breech, a fact about which I was intermittently reminded) didn’t do anything to dispel my fear of childbirth either.

I’m sure Mum thought I’d come round at some point, but I didn’t.

Down the line, when boyfriends would talk about buying a house together and ‘settling down to have a family’, I’d recoil in horror.

No! I wanted freedom, sleep, sanity. I spent Saturdays going to watch football and Sundays watching F1 races or sitting on the beach with a book.

On weekdays I worked ten hours non-stop as a sports journalist, travelling the world with Damon Hill’s F1 team, partying and constantly craving the next adventure. Why on earth would I want to change my life? I loved it.

People have blasted my decision, calling me selfish and telling me ‘You’ll regret it later’. How is not bringing an unwanted child into the world selfish?

It’s not just childbirth that repels me, it’s the years of sleepless nights, crack-of-dawn starts, foul nappies, projectile vomit, giant pushchairs filled to the rafters, regimented routines, having to spend time with other people’s children, and stressful journeys.

An hour to get out of the house just to go to the supermarket? No thanks.

Before you think I’m a wimp, I went through major heart surgery aged four and traumatic bowel surgery at 29, and I deal with two auto-immune diseases — ulcerative colitis and ankylosing spondylitis (spinal arthritis) — on a daily basis.

Being so ill was also a factor in my decision not to have children. For the best part of a decade I couldn’t get out of bed or even take my medication unaided. I would have been incapable of looking after a child.

It was at this point, aged 32, that I asked my GP if I could be sterilised — I couldn’t risk getting pregnant because I knew I couldn’t put my body through the trauma.

My gastro surgeon had told me that I would have ‘great difficulty’ in ‘retaining a foetus full term’.

Throw my drug treatment into the mix — a powerful immuno-suppressant which you can’t take if you want to become pregnant — and perhaps you’ll understand why I wanted to remove the risk of an unplanned pregnancy. I’d never have been able to cope with the idea of abortion, either physically or emotionally.

But, despite everything, I was deemed ‘too young’ to be sterilised ‘in case I changed my mind’.

I persisted with a second opinion, citing the aforementioned reasons. I finally got given the go-ahead, only to find that a scan showed so much scar tissue around my uterus from previous surgical procedures that the operation was cancelled. I was devastated.

My parents have always supported my choice, even before I became ill. They watched me build a great career, and I never considered what it must have been like for them to see their chances of being grandparents (or 50 per cent of them, anyway) diminishing.

They have never hidden their desire to have grandchildren, and occasionally there would be a stab of guilt because I wouldn’t — and couldn’t — give them a child to dote on, just as their parents had doted on me and my brother.

The bond I had with my mum’s mother was very special. She tragically died of bowel cancer when my mum was just 36 and I was nine. My little brother was a month old.

It devastated us all, and I sometimes wished I had felt differently so I could have given my mum a grandchild and created another special relationship.

I’d tell her how I felt, and she’d always say: ‘Juliette, you’ve always been mad, never satisfied, always looking for something or someone else. We never expected you to be conventional. As long as you’re happy, we’re happy.’

I admit that when I found out Kelsey was pregnant, I did have a few wobbles knowing that the close relationship she has with my mum would grow even stronger. They live within three miles of each other, while I’m 130 miles away in Cambridgeshire.

So last year, when I first held my niece Darcey Amelia at three weeks old, I cried. I cried because she was so breathtakingly beautiful. And I cried because — for the first time ever — part of me wished she was mine.

She’s incredibly good-natured, and sleeps like a dream. When I last saw her at Christmas, she was happy to spend all day playing with me, having cuddles and sitting quietly on my lap in front of CBeebies.

Maybe if I’d sought therapy for my phobia, maybe if I had met someone for whom being a parent was a deal-breaker — someone I could not bear to be apart from had they given me an ultimatum — things would have been different.

Maybe my hormones would simply have kicked in at 30 had my body not been ravaged by illness and surgery, and I’d no longer have feared pregnancy or childbirth.

Most probably, I would still have chosen this path. I know that now. No woman should ever feel guilty about not having children, but it’s not always a decision that’s taken lightly, nor one that necessarily remains resolute over the years.

I’ve put more thought into not having a child than most women do into having one. But the arrival of my niece has changed me for the better. I can honestly say that, at 47, I’m at peace with the decision I made all those years ago.

Most of all though, I’m thrilled that my parents’ dream has, at last, come true.