The way we portray fathers is a bit silly and mostly untrue, when you think about it. I was trying to work out where we get our ideas about fatherhood from, so I watched the Steve Martin classic Father of the Bride. (Also, we’re in lockdown and there’s literally nothing else to do, and I can’t bring myself to do any more cooking or walking.)

My Hollywood movie research tells me that dads are supposed to be protective but silly and fun. A little angry sometimes, but mostly just a bit tired from working so much to support their family. They scrutinise potential suitors and protect you from the worst of the world. They stand near the barbecue and sometimes pour beer on onions to make them taste better. 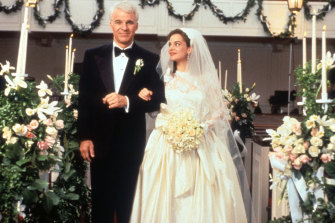 Many Hollywood portryals of fathers are a myth, and a bit dangerous for us to expect this.Credit:Getty Images

Last year, I interviewed Bryce Dallas Howard about a new documentary she’d made starring her dad, Ron Howard. She spoke about him with so much admiration and fondness, and I thought, “I wonder what it feels like to have that sort of unconditional love?”

I grew up without my dad and sometimes I think about how my life might have been different if he’d been around. Maybe I wouldn’t be as self-sufficient or resilient. Or maybe I’d be even more so. Sometimes I wonder if this absence is more obvious to other people than it is to me.

You’re only acutely aware of your fatherlessness on certain occasions, and they’re heartbreaking. They’re not big occasions, such as being walked down the aisle, or Father’s Day celebrations, but seeing people in your life having to do “Dad things”.

Like when I kissed a boy in high school and my mother found out, so she went around to his house and screamed like a banshee. Or the time a man picked a fight with my teenage brother. They’re the times when you’re supposed to have a dad.

The Bureau of Statistics says there are about 7 million families in Australia, with a million of them one-parent and nearly 800,000 held together by single mothers. So it’s not a unique experience. There are about 799,999 other families out there today not opening gifts filled with cologne, socks and razors, and feeling a bit robbed of that ritual.

“There’s plenty of research showing fathers on average offer less hugs, kisses and words of affirmation to their sons than they might their daughters and it leads to these boys potentially growing up lacking the tools to understand and express their own internal experience. We wonder why we’ve got a men’s mental health crisis on our hands.”

But that doesn’t mean that the other 6 million families, the ones with dads, are all having the best
time, either. When I was younger, I think I probably longed for the kind of unconditional love I saw in movies such as Father of the Bride, a jovial father figure who would make the world seem a little bit more safe and secure.

But I think it’s a myth, and a bit dangerous for us to expect this. The relationship between parenthood and masculinity is a complicated one. Dr Zac Seidler, a psychologist who specialises in men’s health, says, “There’s plenty of research showing fathers on average offer less hugs, kisses and words of affirmation to their sons than they might their daughters and it leads to these boys potentially growing up lacking the tools to understand and express their own internal experience. We wonder why we’ve got a men’s mental health crisis on our hands.”

I can’t count the number of men I’ve seen destroyed by their relationship, or lack of one, with their fathers. It makes me wonder what sort of fathers they’ll be when they’re older. They yearn for the affection of their dads. I never knew what that felt like. I also felt free from the burden of their expectations and rules.

Mostly I want to say happy Father’s Day to everyone – to the dads, the pops, the mums, and everyone in between. And that there’s no time like the locked-down present to start building the sorts of relationships you want with the people you love most.

This article appears in Sunday Life magazine within the Sun-Herald and the Sunday Age on sale September 5. To read more from Sunday Life, visit The Sydney Morning Herald and The Age.