As Richard Williams, father of Venus and Serena, Will Smith gives us a portrait of a gifted ringmaster, corralling, cajoling and conscripting every member of the family into his ferociously determined attempt to turn the two girls into tennis stars.

But his best trick lies in his ability to keep them all laughing. A few of King Richard’s detractors have called the film hagiography. Hardly. 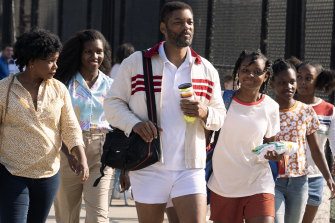 Will Smith as King Richard: there is not a bad ratio of fact to fiction for a Hollywood bio-pic.Credit:Warner Bros

While leaving us in no doubt of Williams’ grit and ingenuity, it doesn’t hold back in depicting the overweening ego, the non-stop talk, and the exhausting optimism. He can be so insufferable that you have to wonder how his daughters’ careers survived him.

He must have driven their coaches near to despair, patrolling the sidelines of their practice sessions, while delivering his own competing commentary on the play.

As far as we can tell, the film is a selective rather than inaccurate biography. We know that it’s right in showing Williams insisting that his daughters train at all hours and in all weathers and that a neighbour once called social services to complain about him. 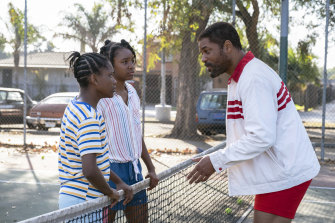 And I guess we can assume that the sisters responded to this regimen with the extraordinary forbearance they display in the film. After all, they’re listed in its credits as executive producers.

On the flip side, we learn nothing about the wife and children he is said to have abandoned before his marriage to Venus and Serena’s mother, Brandy (Aujanue Ellis).

Nor is there any mention of his later divorce from her and subsequent marriage to a woman only one year older than Venus. But the film’s director, Reinaldo Marcus Green, and writer, Zach Baylin, do have their excuses given that these events occur outside the film’s timeline, so all up, it’s not a bad ratio of fact to fiction for a Hollywood bio-pic.

And Smith’s is such a plausible interpretation of a personality fuelled by overflowing reserves of restless energy that it does a lot to stifle your misgivings.

These misgivings are hardest to ignore when the film touches on Venus and Serena’s siblings, Brandy’s three teenage daughters from a former marriage.

Not only do they react to Williams’ obsessive routines without a word of complaint, they barely register as individuals. Relegated to the background, they make up a giggling chorus who regard their stepfather and his fulminations as an endless source of merriment.

And Smith is entertaining. His single-mindedness should make him a bore but he somehow retains his talent to amuse whatever else is on his mind. Charging across the screen in his habitual uniform of sneakers and tennis whites, he has such an air of intent that you can’t wait to see which of your expectations he’s about to confound next.

But even when reminding himself, as he frequently does, that Venus (Saniyya Sidney) and Serena (Demi Singleton) are not tennis machines but children at risk of being forced to grow up too soon, he can’t quite detach himself from the main game.

In the candour of Smith’s performance, it’s easy to discern the fact that he sees their careers as being as intrinsic to them as the colour of their eyes.

The girls grow up in Compton in South Central Los Angeles, an area notorious for the gangs who prowl its streets. And Williams likes to say that the need to keep the girls safe is his main reason for pushing them so hard.

But they’re not exactly leading sheltered lives. In taking them out to a rundown court near the house for hours of day-time and night-time practice, he’s continually risking a run-in with the neighbourhood toughs, who like to watch, and sometimes heckle, from the sidelines.

It’s as if he sees the girls’ ability to cope with the sinister nature of their hovering presence as just one more building block in the forging of two champions.

His saving graces are his courage, his chutzpah, and the love that you can glimpse behind the ambition whenever he persuades himself to slow down for a moment. He’s a force and the vitality of Smith’s performance somehow succeeds in making sense of him.