The last time Lakecia Benjamin was in Sydney her alto saxophone was part of the sound surrounding comedian Craig Robinson. This time, she'll play jazz in an intimate club. That's a perfect snapshot of a career that could be seen as swinging between rubbing shoulders with mega-stardom and digging deep into her art – except Benjamin doesn't see a difference.

New York born and bred, she epitomises that city's attitude of everyone having to justify the oxygen they breathe. When she answers the telephone she sounds somewhere between bored, wary and surly, but is soon animatedly discussing her obsession: music. 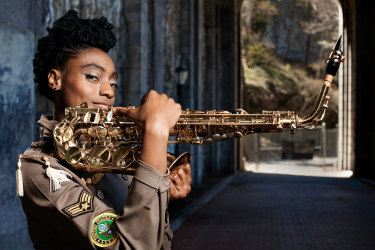 This has seen her perform with such major pop and R&B stars as Stevie Wonder, Missy Elliott, Alicia Keys, Anita Baker, Macy Gray and Kool and the Gang, and also with a gamut of jazz luminaries ranging from the Count Basie Orchestra to singer Gregory Porter and Rashied Ali, the drummer who fuelled the final years of John Coltrane's towering artistry. Now she's headlining this year's Sydney Women's International Jazz Festival (November 2-17), playing with two local bands: a trio (including bassist Phil Stack) and the 10-piece Pharos.

The music Benjamin plays with them may lie anywhere from wide-open improvising to sock-it-to-me soul. Given her all-time favourite album is Sly and the Family Stone's 1973 bible of funk, Fresh, is she happiest making people dance or listen?

"I believe that there's music for every type of occasion, every type of experience," she says. "Sometimes, people need to dance, sometimes they need to feel, sometimes they need to sit down and listen. So I think it's more important for me, especially because I'm just coming up, still, to be able to do as much as possible. You've got to be able to do it all. I don't want to limit myself so I'm only mastering one thing. That's just not the world I live in."

Having spent so much time backing major stars, she knows the importance of contributing to a collective sound and enhancing the groove. "In funk, R&B and pop the groove is the most important thing. Do not disturb it. Even when you solo it has to be right in the groove. I really feel like the world we live in now is kind of like a 'me-me-me' show-off world, so people need to take the time – and it comes with maturity, too – to contribute to things feeling good. Once you can do that, then you can move to the next level."

Benjamin insists those who want to engage with this msuic at that level must try their hand in New York, to see if they can stand the heat.

"In New York they're playing like this song is the last song they're ever going to play in their life," she says. "If you don't hear them ever again, you heard them here and they got it all out. In other places maybe it's more collegiate; maybe it's more like, 'Wow, that was fun.' Here there is a very dire desperation to express."

She believes this is partly due to people having to work so hard to make it, often coming from deprived backgrounds, just as jazz, itself, grew out of the suffering of slavery.

"All of my peer artists are having the time of their lives, playing like this is their last night," she says. "No one kind of likes playing: either you love it or you don't. There's no middle ground."

Lakecia Benjamin at Foundry 616: November13 (with quartet); November 15 (with Pharos).