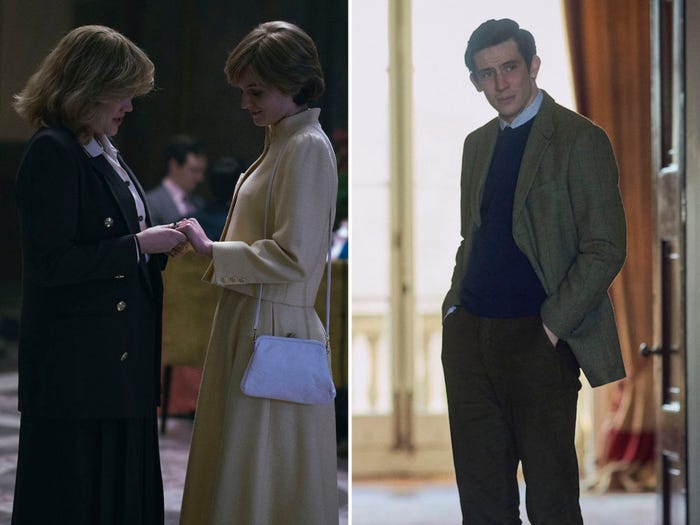 Season four of "The Crown" lets viewers into the fictionalized lives of British royal family members from the late 1970s until Christmas in 1990.

Prince Charles and Camilla, Duchess of Cornwall, reportedly met for the first time at a Polo match at Windsor Castle in 1970. Prince Charles left to serve in the Royal Navy in 1972, and a year later, Camilla married her first husband, Andrew Parker Bowles, an army cavalry officer whose family had close ties to the royal family, according to Town & Country.

Hugo Vickers, a royal historian and author of "'The Crown' Dissected: An Analysis of the Netflix Series 'The Crown' Seasons 1, 2 and 3" and a new e-book decoding season four, told Insider what's fact and fiction in regard to Charles and Camilla's affair as portrayed in "The Crown."

Episode three of season four of "The Crown," titled "Fairytale," depicts Princess Diana finding a bracelet that Prince Charles was going to give to Camilla Parker Bowles. Vickers said that the general idea of the bracelet — as shown in the series as a sort of farewell or parting gift — was factual.

"As far as I understand it, [Prince Charles] realized — unlike what they showed in the series — that when he gets married, that's it — you know, the relationship with Camilla has to end. And so he thought it would be nice to give her a present, and Diana, unfortunately, strayed across this thing, and there were these initials, 'G' and 'F,'" Vickers said.

Vickers went on to say that based on BBC journalist Jonathan Dimbleby's book "The Prince of Wales: A Biography," the bracelet's engraved initials, "G" and "F," really stood for "Girl Friday," which was Prince Charles' nickname for Camilla.

However, in "The Crown," Camilla has lunch with then-Lady Diana Spencer and reveals that she and Prince Charles called each other "Fred" and "Gladys."

"I'm sure that never happened," Vickers said of the conversation between Camilla and Diana in regard to the bracelet.

Vickers added in "'The Crown' Dissected" that Prince Charles' feelings for Camilla had not changed when he got engaged to Diana, but that their relationship could no longer be maintained.

'The Crown' depicts Prince Charles and Camilla seeing each other during the early stages of Charles and Diana's marriage, but Vickers says this likely wasn't the case

In episode four of the latest season of "The Crown," a scene shows Prince Charles telling the Queen — who's checking up on each of her children by having lunch with them privately — that he occasionally hunts with Camilla and talks to her whenever he needs to.

Vickers said that to his understanding, Prince Charles and Camilla weren't constantly visiting each other in the early years of the Prince and Princess of Wales' marriage.

"Apparently, Prince Charles saw Camilla once between the engagement and marriage, which was to politely hand over this little gift in person. That's what we are told," Vickers said, referencing the engraved bracelet. "To my understanding of the relationship, after that, he didn't see Camilla until 1986."

According to a biography of Prince Charles by historian Sally Bedell Smith, 1986 was the year that the Prince of Wales and Camilla reportedly began having an affair.

Princess Diana reportedly knew about the affair, according to her interview with biographer Andrew Morton; as did Camilla's husband, Andrew Parker Bowles, according to Penny Junor's book "The Duchess: Camilla Parker Bowles and the Love Affair That Rocked the Crown."

Vickers also told Insider that what he thinks "The Crown" does not fully depict is the reality that Prince Charles and Camilla were both in attendance at official royal engagements throughout the 1980s, but this had nothing to do with their intimacy.

For example, Camilla's husband, Andrew Parker Bowles, played a role in the wedding of Prince Charles and Princess Diana. As such, Vickers said, it made sense for Camilla to be in attendance at the wedding.

"If you look through records of the wedding, you'll see that the Queen's Sovereign Escort of the Household Cavalry was Andrew Parker Bowles," Vickers said. "He played a big role in leading the wedding procession, so of course Camilla would be at the wedding — it had nothing to do with her being an ex-mistress [of Prince Charles]."

Andrew Parker Bowles' military position also meant that he and Camilla would have been in attendance at other major royal events, such as the Trooping the Colour, the Queen's annual birthday parade, Vickers said.

'The Crown' shows Prince Charles wanting to divorce Princess Diana after she returns from her trip to the US, but Vickers says this isn't true

Season four of "The Crown" re-created Princess Diana's solo visit to New York City, which included a visit to the Brooklyn Academy of Music for its 1989 Royal Gala. But the show seemed to use Princess Diana's trip to America as a way to speed up the timeline in which Prince Charles wanted a divorce, which wasn't fully accurate, Vickers said.

"On Diana's return from America, there is an unpleasant scene in which Prince Charles yells at her for 'hurting' his mistress. 'Camilla is who I want,' he screams," Vickers said in "'The Crown' Dissected."

Vickers added: "History does not corroborate any wish for divorce or separation at this time."

Up until 1992 — when an intimate transcript of a 1989 phone call between the Prince of Wales and Camilla was made public, and was later dubbed the "Camillagate" scandal — Prince Charles believed that his marriage with Princess Diana "could still work publicly, if not privately," Vickers said.