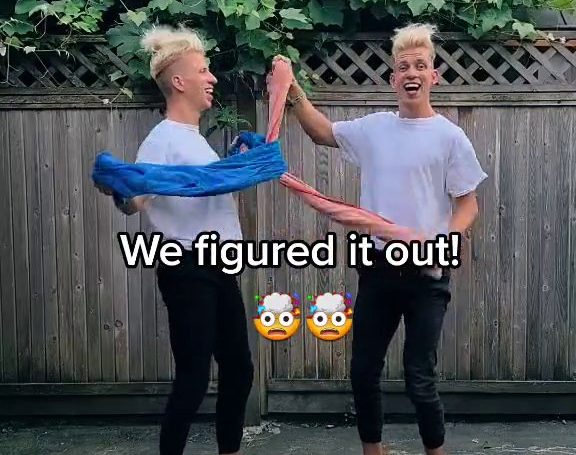 TikTok taught us what to do if you find a beehive in your garden, how to do a perfect cut crease eye look, and how to clean our ovens while we sleep.

But there’s one trend on the video site that we probably won’t learn anything from; the two towel challenge.

Popularised by influencers like The Voros Twins, it involves two people holding a towel each.

The towels are rolled up, with each person holding one end in a different arm. They should be interlocked.

The idea is that you keep hold of your towel but untangle yourself from your partner through a series of twists and turns, not unlike the linked rings magic trick you may have seen.

It is possible!!! #fyp #twins #twotowelchallenge

Videos on the hashtag have now been viewed over 14.8million times, with various people either saying it had stumped them or that they’d ‘figured it out’.

So far those who’ve said they cracked it have been accused of cheating, as it appears that people often unlink themselves while their hands are off-camera.

Now you know what it is – and have potentially been trying to figure it out – it’s worth pointing out that it is theoretically impossible to unlink the two towels.

No matter which way you twist or step through the towels, you’ll stay linked together.

So, although we don’t want to snitch on those who’ve pretended to master the trick, please be aware that their attempts aren’t real.

Perhaps let’s think of it as a prank that you can annoy your family and friends with for hours, rather than an achievable goal for yourself.

In that sense, it’s not impossible – we wager you’ll be persona non grata in no time.