Climate Change and Energy Minister Chris Bowen has outlined the next phase of the federal government’s plan to shift the nation substantially onto renewable energy, a day after the lower house passed historic legislation locking in at least a 43 per cent cut to emissions by 2030.

The federal government is planning to create a national network of zones where offshore wind power generation is allowed, naming six areas it will seek to declare “suitable” as Bowen said Australia had a lot of catching up to do in the sector. 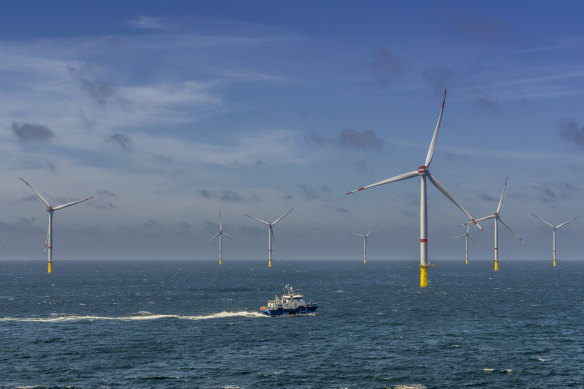 Laws allowing offshore wind projects were put through parliament only last year and came into force in June.

He formally launched a 60-day consultation on Friday to declare the coast off Victoria’s Gippsland region a suitable location for offshore energy projects – a legal step required before any projects can be approved.

He also announced he intends to launch consultations for a zone near the Hunter region in NSW shortly. The Illawarra region south of Sydney, Portland in Victoria, the Bass Strait north of Tasmania, and Perth and Bunbury in Western Australia will follow within 18 months.

Laws allowing offshore wind projects were put through parliament only last year and came into force in June.

The previous government announced in April, days before the federal election was called, that Gippsland would be the first priority area, but did not launch the consultation process because the underpinning legislation had not yet kicked in. It did not name other likely regions at that time.

The Australian Energy Market Operator recently warned a ninefold increase in renewable electricity generation capacity was needed as quickly as possible to replace the faster than expected shutdown of coal plants.

Labor projects as part of its planned emissions cuts that renewables will lift to 80 per cent of electricity supply by 2030, up from about 30 per cent now.

Experts say offshore wind power has the potential to contribute significantly to that goal and the announcement of the designated zones will create certainty for investors and lead to more projects being advanced.

Dr Madeline Taylor, an energy expert at Macquarie University and member of the Climate Council, said the “super proactive” approach was heartening and would send a strong market signal.

“It’s hugely important and exciting because it gives the industry and community some certainty that these are going to be declared areas,” she said.

Offshore wind would be a key pillar in replacing ageing coal power infrastructure, she said, so opening up locations nearby was sensible and would help provide a transition to jobs in clean energy for communities.

There are currently 19 offshore wind projects proposed for development from regional industry hubs in Victoria’s Latrobe Valley, Port Kembla and Newcastle in NSW and Gladstone in Queensland, with a combined generation capacity of 28 gigawatts, which is roughly half that of the eastern seaboard’s electricity market.

The most advanced proposal, the Star of the South, is based in the Gippsland region. The 2.2-gigawatt wind farm aims to start generation in 2028. Its proponents say it will create 2000 jobs during construction and 200 ongoing positions.

However, he said the initial costs of offshore wind – especially for the first few projects when there were no established supply chains – were higher than other renewables.

“Geographic diversity and technology diversity is really valuable if you’re trying to decarbonise the grid.”

The Australia Institute’s climate and energy director, Richie Merzian, said the larger scale of offshore wind – “We’re talking about wind turbines as tall as the Eiffel Tower” – meant it had the potential to be a major generation source.