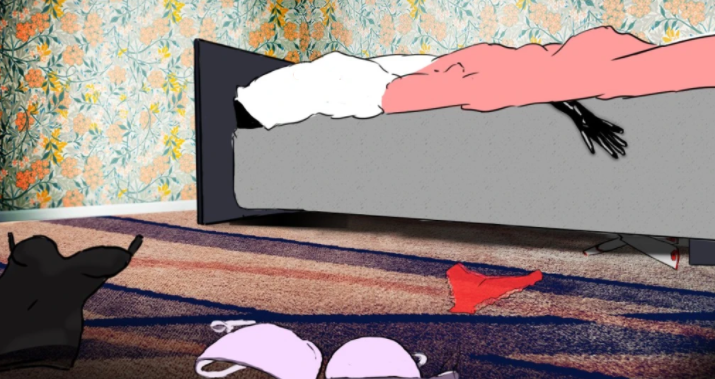 For today’s How I Do It, in which a new person each week gives us a sneak peek into their sex life, we hear from bisexual 23-year-old student Aisha* once again.

Aisha, who also now works as an assistant and volunteers at a daycare, first took part in How I Do It back in February, at which point most of her relationship had taken place during one lockdown or another.

At that time, she shared that she felt guilty saying no to sex and that she was having some self-esteem issues, which wasn’t great for her sex drive.

Since then, she and her boyfriend went on a break, got back together, moved in together and tried opening up their relationship for a time, although they’re back to being monogamous for the time being.

Aisha has also since started working through her anxiety when it comes to sex and body image in therapy and, while she still feels a little insecure, she says her relationship with sex is healthier.

WARNING: The sexual nature of what you’re about to read means it’s NSFW.

Monday means I’m working at the daycare today. It’s not too far from home, so I don’t really need to rush.

My boyfriend’s still asleep when I’m about to leave, so I give him a quick kiss and head out.

After my workday is done, I go home and make dinner while I wait for him to come back from work.

After we eat, we watch a show and I decide to run myself a bath to relax my body a little. Plus, I love the fresh, clean glow it gives me.

When I’m back in the bedroom, he’s giving me The Look and I know what that means. It makes me feel shy and a little nervous, even though we’ve probably had sex at least a couple thousand times by now.

We start with making out slowly, then move to using our hands and oral before getting to the penetration part. It’s slow and intimate today, which I love – it almost makes me want to cry.

He stays inside me for a little bit before we both realise we need to pee and race to the bathroom. He wins.

Today’s spent volunteering and doing uni work, and he’s training at the gym when I get home.

When he gets back, we have dinner and he plays some video games while I read.

When he decides to take a break, I suggest a different position for giving him head that I came across online – him doing a headstand.

He’s pretty good at doing those, but the issue is the blood rushing to his head… his head head, I mean.

We try it anyway. He’s obviously rock hard, and he’s able to do the headstand and stay hard for a good few minutes before needing to get back to a normal position due to the head rush.

It was fun to try, and after finishing him off, he eats me out from behind which is a little different. I’m not sure how I feel about it – I don’t hate it, but don’t love it either. It’s just different.

We end the session by having sex sitting on the edge of the bed, then in doggy style.

Today, we have morning sex before I start work for the first time in ages.

We used to do it more often at the start of our relationship, but I’m not a fan of morning breath – I don’t really like feeling it, so we both usually brush our teeth before doing anything.

I’m on top this time, and it’s quite fast and nice.

For the next few hours, I’m working and he’s chilling before he heads out to work.

When he’s home, I get dinner ready, which is a new dish I’ve been wanting to make for a while.

We have sex again that night and I find myself feeling more comfortable with everything in comparison to before.

There are moments when I find myself still thinking I’m not good enough or pretty or sexy enough or ‘good in bed’, but I know if my man didn’t find me gorgeous, he wouldn’t be with me.

My issues with the way I look come from me and unlearning them is a lifelong process.

Therapy’s been helping with that, as is living with my partner.

I have work again, but I head into the office this time and do an extra couple of hours.

On the commute, I place an order for a bunch of new lingerie and some new costumes.

We’ve done the French maid, the nurse, and the policeman so far, and I want to try some fantasy ones like fairies and vampires and that type of thing.

I think I’d like to try being a police officer too, but knowing me, I’ll just start laughing. I can’t even pretend to try to be stern.

I imagine myself telling him: ‘You’re under arrest’. He’d be like what for, and I’d say ‘…being too sexy’. Cue me bursting into hysterical giggles.

I get back home at around 9pm, and he’s got dinner ready. He’s made us a healthy pizza and garlic bread, which I love.

We don’t have sex tonight as we’re both tired and worn out, instead we just watch The Good Place.

I’m back home around the same time as Thursday because I had to be in the office again, and spent my lunch hour in a seminar as it’s remote.

We kiss. I remove all of my clothes and just lower his boxers and sweatpants. I love that he’s still pretty much got his clothes on, and I’m naked, something about it is so exciting – it’s like he’s got the power here. (Yes, he’s the more dominant one).

As I’m on my knees, I find it way easier to look up at him than when we’re on the bed, and finding him watching me turns me on more and I touch myself as well.

We both finish and he goes down on me and makes me come twice more, before he gets out a pair of handcuffs and cuffs my hands together. The sex is harder than usual, and I’m pretty sure the entire neighbourhood can hear me.

But whatever, the sex was mind-blowing.

We eat afterwards (even though the pasta’s gone a little cold) while finishing off the third season of The Good Place. It was a great end to a very exhausting day.

We have oral sex in the morning, then I make him a black coffee and a green tea for myself. We eat breakfast before heading out for lunch with some friends.

I’m wearing a tube top that shows off my boobs and I can just feel him staring at me the entire time. I feel really good, and I know I look good.

When we sit down at the table, our legs are touching, and he’s occasionally stroking my thigh. As we’re leaving, I squeeze his butt and he laughs.

I can tell the sex is going to be rough when we get home and I’m excited.

A couple of hours pass with little touches and looks, and we occasionally exchange dirty texts.

When we are home, I change the lighting to red and put on our ‘f*****g playlist’. Then we get some toys, a blindfold and the cuffs out.

I wake him up by showering his face with kisses and when he’s awake, I give him a lubey hand job. We do it on the bean bag with me on top, and it feels really intense, like the first time we did it on there.

I let him finish from the head, and then he wants to go down on me too.

Afterwards, we spend the day just lounging about, ultimately having sex four times in total.

It’s reminiscent of the days when we didn’t live together and would go crazy for each other when we got the chance.

I think the most times we’ve had sex in one day is about nine.

I’m hoping we can top that – that day’s yet to come, but it will. I’ve got a few plans for Halloween…

*Name has been changed