As home to one of the three largest comedy festivals on the planet, Melbourne has always had a vibrant stand-up scene. With minimal tech requirements – microphone and light essential, elevated stage optional – it’s a performing art form that can be shoehorned into pretty much any space. 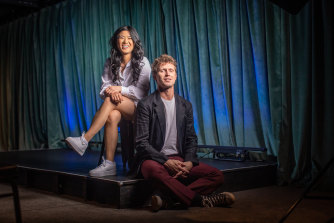 Comedians Annie Louey and David Quirk at Comedy Republic, a new venue in the CBD.Credit:Scott McNaughon

As a result, on any given night across the inner city you can find rooms within pubs and other venues being temporarily transformed into pop-up dens of levity. It’s an organic landscape, ad hoc and not without some underground charm.

Stand-up comedian Rhys Nicholson recalls doing a gig with Judith Lucy a couple of years ago in one such popular but cramped room in Chinatown. “We’re all standing at the back of the pub waiting to go on, with the audience, and I remember thinking ‘why is Judith Lucy, the best comedian in the country, having to stand at the back of the room?‘”

While Nicholson jokes he’d previously made “drunk ramblings” about wanting to open a premium comedy theatre in a permanent location, this gig “sparked it properly”. Together with Kyran Wheatley and Alex Dyson, the trio have opened Comedy Republic, upstairs at 231 Bourke Street. “I call myself the really loud silent partner,” says Nicholson from New Zealand, where he is currently quarantining ahead of filming the second season as a judge on Ru Paul’s Drag Race Down Under.

Last week, Comedy Republic opened their doors for 2022 and, omicron willing, will run shows every Thursday, Friday and Saturday night. It will work in the same way as the weekly and monthly rooms, playing a vital role in the comedy ecosystem by providing invaluable stage time, allowing performers to hone skills and material, build audiences and network throughout the year. “We’re trying to service the industry in any way that we possibly can,” he says. 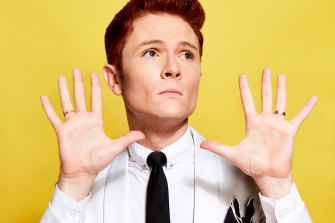 Comedian Rhys Nicholson is a judge on Drag Race Down Under as well as a comedy venue owner.Credit:Monica Pronk

“When Comedy Festival ends here there’s nowhere for people at kind of my level or a little bit under to do a run of their shows again, so we wanted to create a space for that,” says Nicholson, who is one of only three Australian stand-ups to have his own Netflix special and later this year will be back on the streaming giant acting in sci-fi comedy The Imperfects.

With Melbourne International Comedy Festival returning on March 30, artists are now finessing what will become their finished hour. Comedyish Summer Camp, twelve hours of comedy happening this weekend at Comedy Republic, will assist with that. “You can see some of the biggest comedians trying out new stuff,” he says.

“There’s the celebrity names you go to see, but there’s also like a little niche storytelling night, or improv sometimes. It’s like a smorgasbord and they do pick really great acts,” says Annie Louey of the new venue’s programming. “They have something for everyone,” says the fast-rising stand-up star who is also a regular segment presenter on both ABC Radio Melbourne Breakfast with Sammy J and ABC TV’s China Tonight.

In the time-honoured tradition of comedians running rooms, Louey does that as well. Billed as “the city’s premier diversity night”, the itinerant Lemon Comedy has found its latest home at Comedy Republic, which is also a Midsumma Festival Hub this year. It will host eight shows, including Lemon’s ‘Pride Edition’ on January 30.

Nicholson says the goal was to create an “aspirational” venue, a professional room to inspire comedians, entertain audiences and legitimise comedy as an artform. “Comedy is not listed in with the other artforms… There’s nothing like the last couple of years to have made us very aware of that when it comes to things like grants and support,” he says, referring to the fact their original opening was thwarted when Melbourne went into its first of many lockdowns. “We pivoted pretty hard into online shows,” he says of how they survived.

“It’s been really hard. Really, really, really, I cannot emphasise enough how hard its been, but it all comes down to the team and this sounds so hokey, but everyone believes in it,” he says of their core staff of twelve. That belief has resulted in a theatre space purpose-built for comedy, where you’ll find comedians at the bar after their gigs but never at the back of the room before they go on. “We have a nice bar, a nice stage and a green room that I painted very badly,” says Nicholson.

Good for a giggle

Starting February 9 is Lauren Bok’s and Scout Boxhall’s Hairbrush Comedy, at the Grace Darling in Collingwood, then every second Tuesday of the month. www.facebook.com/hairbrushcomedy

The Malthouse Outdoor Stage returns during February and March, with performances from Geraldine Hickey, Sam Simmons and Dave Hughes. malthousetheatre.com.au