Country music just got a 300 million volt supercharge, courtesy of Warren Zeiders. Amid releasing the deluxe version of his covers album, Warren tells us how he developed his sound and more.

Lighting can strike twice, despite what you’ve been told. While metalheads and thrash punkers will think of one group when you say the words “Ride The Lightning,” Warren Zeiders looks to change their minds – and make a bunch of new fans. First released as part of his 717 Tapes project and recently given the full-band treatment, Warren’s “Ride The Lightning” positions himself as the country artist that all your hesher friends listen to on the down-low. Warren’s is a different kind of country, born in the dirt of rural Pennsylvania and raised on equal parts Merle Haggard and AC/DC. It’s outlaw country, and Warren tells HollywoodLife that if you were to call his sound that, he “wouldn’t even bat my eye.”

“What I’m doing and what I’m portraying as an artist — I’m not going to go kill someone, that kind of outlaw,” he says. “But, what I’m portraying in the music is that side of me. How I was raised up is, I don’t take any crap. This is who I am, and this is what you’re going to get. There’s no cookie-cutter, like, I’m going to sway who I am. And that’s what I portray through my music. I think that’s why I’ve been successful. My fans have read into that. I’m just a 22-year-old kid who likes what he does. So I guess that’s kind of where the outlaw mentality comes from.”

“I would say was before music, I think I’ve always had this kind of [mentality] inside of me,” explains Warren. “I was never really a follower. I was always kind of a leader in all walks of life. You know, this world needs leaders and followers. But at the end of the day, I just kind of that was never really in my blood, from anywhere from being in sports to, honestly, my entire life.” 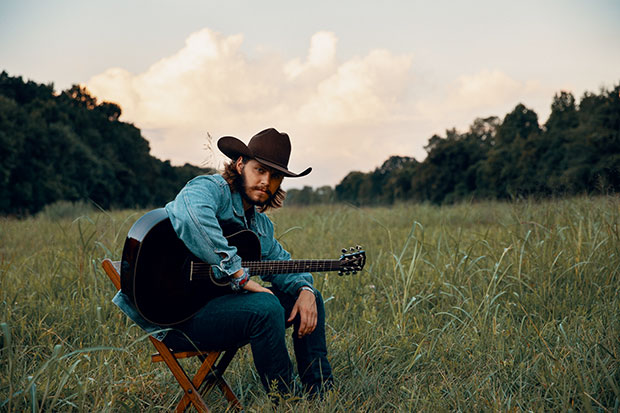 This isn’t to say that Warren is a mess — “I am a very disciplined person,” he says, and having played lacrosse for twelve years, he has developed an attitude that, for lack of a better term, gets shit done. “The best thing I can do is I work my ass off, but I don’t show to my fans because the best ones in the industry are the ones who work the hardest, but you don’t know they are,” he says. “And that’s what I love about, you know, successful artists.”

That mentality and work ethic are visible in his 2021 output, and his new album, Acoustic Covers (Deluxe). This version expands on the album he put out in 2021, which included covers of songs by Post Malone (“Feeling Whitney”), Afroman (“Colt 45”), Tyler Childers (“Lady May”) and Jason Isbell (“Cover Me Up”). This deluxe version includes a collab with Craig Campbell on the latter’s “Outskirts of Heaven,” and a heartfelt rendition of Lynyrd Skynyrd‘s “Simple Man.”

Acoustic Covers (Deluxe) pays homage to those who have laid the groundwork for his career. That reverence is also in “Ride The Lightning,” the first song Warren wrote after relocating to Nashville. “It came out of a writing partnership with Eric Paslay – “who’s had massive success in the country scene,” says Warren – and Rob Crosby. There is also another person who helped make this song possible: his manager. “The fun story behind it is, I actually did it from my manager’s guest bedroom. It wasn’t even in person, it was over Zoom, my first time to Nashville, and kind of out of my comfort zone, but they [Rob and Eric] brought the best out of me.”

The best has been spread across the course of three songs, all of which have properly introduced Warren to the country music world. “So my super fans have found out – ‘On The Run’ is the first song I ever released. And I have another song out on YouTube. It’s not on training platforms, but it’s called ‘Life Sentence.’ And technically, ‘Ride The Lightning’ is the third song of that trilogy.”

While superfans have been able to piece together the clues, one doesn’t need to go far to pick up what Warren is putting down. His 717 Tapes project, released earlier this year, is a stripped-back musical mission statement, the kind of declaration that only comes with just a man and his guitar. The bare-bones approach to this ‘first impression’ also means there’s nothing here but Warren, a mic, and six strings. It’s an honest and open approach that has won over millions: 1.4 million, to be precise, on TikTok alone (with 370k more on Instagram.) Warren values every one, especially since they’ve all had a hand in his career taking off. 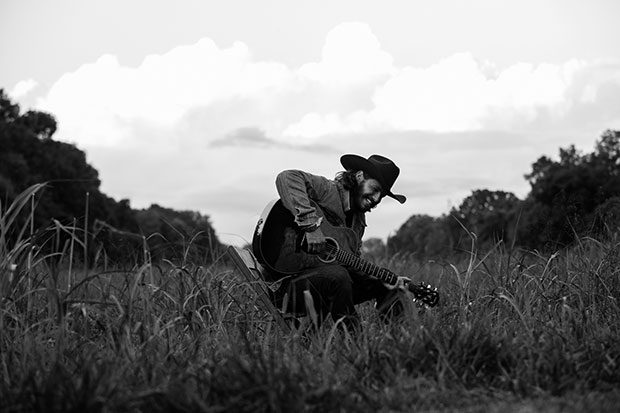 “I’ll give you a perfect example,” he says. “So ‘Ride the Lightning.’ My manager and I were joking. And he’s like, ‘you can not release the first song you ever wrote in Nashville, like, that can’t be the first song you release. And I took it home, and I played it for friends. I played it on my social media, but I only played it once or twice, and that was months and months before it was released.” The song was, as Warren put it, decently well-received. There wasn’t a huge surge in feedback, but what he got was always positive. (“‘This is going to be a massively huge song,” he says when describing some of the comments.)

“It was funny,” he continues, “There was something inside of me, and something inside of my family and friends were like, ‘this has got to be the song.’ Like this has got to be the song. So me and my manager, we put it up into TuneCore. And, you know, we just ship it off. But meanwhile, I was playing it live every night on my live streams, and people were like, ‘Dude, this is a cool song. Like I kind of dig this.’ Did I not know that I would put it out and have over 40,000 pre-saves on the song. It has been a rocket ship to watch it grow. I mean, I think it’s gotten over now — this is me tooting my horn, and it doesn’t come off as distasteful — but I’ve I think I’ve grown over 15 million-plus streams across all platforms and now only a couple months.”

The secret to Warren’s success could be found in his decision to first present himself as a man with a guitar before giving “Ride The Lighting” the full-band treatment.

“I think it goes back to authenticity,” he says. “I think my idea was, ‘okay, how do I get a song out there to my fans, where I’m not covered by anything. It’s a vocal on a guitar. That’s ‘this is who I am, and this is, what I do and how I sound,’ because there’s nothing else to hide behind. And that’s not me throwing shade on whatever — you do what you do, and do what you love you and have all the success you would like.”

While Warren is more than happy to do full production – he says he was “excited” to share the new take on “Ride The Lightning” – he knows that there’s some strength in keeping it simple.

“Back in October November [2020], I had 40,000 followers on Tiktok to my name, and I had 3,000 followers on Instagram. And they wanted music from me,” he says. “So I went to Guitar Center one day dropped a couple grand, bought a couple of mics and interface, plugged it on my laptop, and I pressed record, and it was a one-take for everything. I recorded it in my bedroom. Everything was a one-take, no-edits — nothing, through and through.”

Now, with his presence growing by leaps and bound, this country star is figuring out this “new phase” of Warren Zeiders. “I look forward to it,” he says with a smile, “to actually being in a room and feeling 200-300 people, you know, being a part of this. Whatever size the room is, whatever the plans I figure out.”

Those plans currently are looking at some live dates in February/March 2022, but Warren’s still locking down the details. Still, that hasn’t deterred his excitement and the electric feeling of bringing this new music to all those who have supported him over the past year. “How do I get there? Still gonna try to figure that out,” he says. “But really, I think it’s gonna be an exhilarating part of the journey to finally go from a phone screen to then be like, ‘holy crap. He’s real. All the music. I’ve been streaming here. Yes, the person in front of me.’ ”