Australians want Prime Minister Scott Morrison to serve a full term rather than go to an early election in the wake of the federal budget, with 61 per cent backing last week’s fiscal plan as good for economic recovery.

Only one in five voters think Mr Morrison should go to an early poll while 59 per cent prefer an election next year, sending a warning to the government as Liberals debate whether to race to the ballot box.

The findings are contained in a new survey that shows slight gains in primary vote for both major parties over the past month, with the Coalition rising from 38 to 39 per cent while Labor edged up from 33 to 35 per cent.

The exclusive survey, the second in a new initiative from The Sydney Morning Herald and The Age with research company Resolve Strategic, showed 78 per cent supported the mammoth budget outlay on aged care.

While voters gave similar ratings to the skills package and the continued tax offsets for workers on low and middle incomes, their support dropped to 56 per cent for the childcare package, a policy where Labor promises more funding.

Asked about the $161 billion deficit and the federal debt, only 37 per cent gave the budget plan their support.

The survey asked 1622 voters about their views in online questions in a random order to avoid a “donkey vote” with the results.

Because the margin of error was 2.5 per cent, the results do not show a strong gain for either of the major parties in primary vote terms in the wake of the budget.

Support for the Greens was steady at 12 per cent, as was support for independent candidates at 8 per cent. While Pauline Hanson’s One Nation lost ground, there was a corresponding gain in support for “other” candidates.

Resolve director Jim Reed said the result in two-party terms was “way too close to call” whether preferences were applied according to the last election or statements from those surveyed.

“People often speak about a potential ‘budget bounce’ but in reality they very rarely happen and when they do they’re often felt weeks or months into the future when the policies begin to be implemented,” he said.

“For tax cuts this often happens after the end of the financial year. That’s the case here, where we see no extension of the Coalition’s primary vote immediately, but we do see a swathe of underlying gains in areas of political and policy performance. The budget has been very well-received by voters. They support each of the headline measures and they support the focus on spending to support social services and stimulate the economy.”

This was one of the most favourable reactions to the budget, but people were not so sure about the gains for themselves. 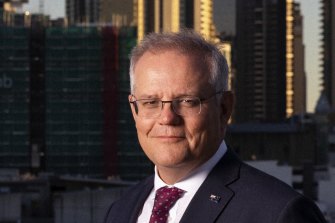 Australian voters would rather Scott Morrison serve a full term than go to an early election.Credit:Dominic Lorrimer

The survey found 55 per cent considered the budget good for women, with 7 per cent rating it bad or very bad and the remainder undecided.

Asked about the environment, however, only 7 per cent thought the budget good and 35 per cent very good, with 15 per cent rating it bad or very bad.

The positive response to the budget appeared to cast a reflected glow on Treasurer Josh Frydenberg, with 54 per cent of respondents rating him good compared to 23 per cent rating him bad.

One significant change in the four weeks since the last Resolve Political Monitor was the expectation of the electorate.

The survey found that 46 per cent of voters expected the Coalition to win the next election, while 21 per cent tipped Labor – a fall of seven percentage points. The result one month ago was 44 to 28 per cent.

Mr Morrison’s personal rating rose slightly – he received a positive net leadership result of 15 percentage points, up from 12 points in the survey published on April 20.

This was calculated from 53 per cent rating him good or very good and 38 per cent poor or very poor.

The survey was conducted from May 12 to 16 in the immediate aftermath of a federal budget that outlined $74.6 billion in new spending and tax breaks over five years.

Because the poll asked voters to nominate their primary votes in the same way as they filled in their ballot papers for the lower house at an election, there is no “undecided” category in the results, a key difference with some other surveys.

Resolve is a polling company established by Mr Reed, who was previously group director of research and strategy at CT Group – formerly Crosby Textor – and senior research director at Newgate Communications.

Mr Reed’s work has included contracts with the federal government, such as the Treasury, and his work at Newgate included polling for the Yes campaign on marriage equality.