Voters are taking a cautious approach to reopening international borders amid a fierce debate about when to make the change, with 44 per cent saying it is “about right” to aim for the middle of next year.

Only 9 per cent believe the federal government is being “too pessimistic” in naming mid-2022 as the likely date, despite calls from state and business leaders for a clear road map to ease border controls. 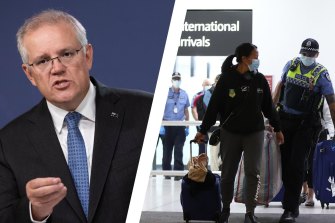 The latest Resolve Political Monitor finds another 33 per cent believe the timetable is “too optimistic” and the borders could stay shut for longer.

Prime Minister Scott Morrison said on Tuesday the coronavirus was raging around the world with new strains emerging and he was “not going to take risks with Australians’ lives” by opening borders too soon.

But NSW Premier Gladys Berejiklian has called for more ambition, suggesting the state could inoculate 5 million people before the middle of next year depending on vaccine availability to allow borders to open faster. That suggests a vaccination target of 75 or 80 per cent of the population before freeing up international travel.

While Virgin Airlines chief Jayne Hrdlicka argued for open borders before mid-2022 because the vaccination rollout should allow Australians to live with COVID-19 as they did with the flu, even if that meant some people died, the two major political parties are both wary of a faster plan.

Mr Morrison blasted her comments as “insensitive” when 910 Australians had died from the virus.

Labor leader Anthony Albanese said the government needed to fix the vaccine rollout and quarantine regime before it could open borders.

“No-one supports opening the borders without concern about the health consequences but what we do need to do is get that right. The government’s had more than a year to get it right and they haven’t up to this point,” he said.

Mike Freelander, a doctor and the federal Labor MP for Macarthur in western Sydney, attacked calls from wealthier Australians for a faster shift to open borders.

“We must have immunisation, including for children, and better quarantine before any border opening,” he said. “I would rather live in a hermit kingdom than a leper colony.”

The exclusive survey, the second in an initiative from The Sydney Morning Herald and The Age with research company Resolve Strategic, also reveals strong support for the Coalition on key measures in managing the pandemic.

Asked how they rated the two major parties on managing key policies, 46 per cent said the Coalition would do best in handling COVID-19 compared to 20 per cent for Labor.

Asked about border controls and social restrictions, 44 per cent preferred the Coalition while 21 per cent favoured Labor.

Support for the Coalition was slightly stronger on national security and defence, at 45 per cent to 17 per cent, and on economic management, 46 per cent to 20 per cent.

The survey was conducted from May 12 to 16 after Treasurer Josh Frydenberg unveiled a budget with $74.6 billion in tax breaks and new spending on aged care, disability, mental health and support for women.

Despite that spending, voters favoured Labor on some of these issues.

Asked how they rated the two major parties on managing welfare and benefits, 34 per cent said Labor would do best while 31 per cent named the Coalition.

Asked how they rated the two major parties on managing the environment, 28 per cent said Labor would do best while 22 per cent named the Coalition.

The Resolve question on the border timetable did not ask voters when they personally wanted the border open but whether they thought the budget target was realistic.

“The budget figures are based on the assumption that Australia will be able to progressively open its borders to other countries from mid-2022,” the question said. “Do you think this assumption is too optimistic, about right, too pessimistic or are you unsure?”

The results are based on an online survey of 1622 people, weighted to reflect the population and with a margin of error of 2.5 per cent.