Australians aged 40 years and over will become eligible for their coronavirus jabs next week across the whole country as governments seek to step up the vaccination rollout.

National cabinet has asked medical experts for further advice about whether it should be mandatory for aged care workers to be vaccinated against COVID-19 while strongly urging everyone in the sector to protect themselves voluntarily. 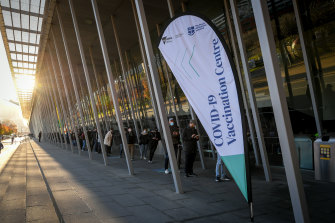 People aged 40 and over will be eligible for COVID vaccines from Tuesday as governments mull whether to make the jabs mandatory for aged care workers.Credit:Eddie Jim

Chief Medical Officer Paul Kelly said the Australian Health Protection Principal Committee had previously flagged issues that would need to be addressed, including ensuring vaccines were easily accessible and enough staff were available if some suffered side-effects. He also noted there was a lack of data about staff vaccinations.

“Is this really an issue? Are people actually coming forward?” Professor Kelly said. “If that extra [mandate] is needed, then we will definitely go to that point.”

The government’s initial goal was to have the majority of the 190,000 aged care residents and roughly 366,000 workers vaccinated in the first six weeks of the rollout.

But Health Department officials told Senate estimates this week only 32,833 aged care workers – or less than 10 per cent – had been fully vaccinated through the facility where they worked. The Commonwealth did not know how many others might have received shots through GP clinics, state-run hospital hubs or special pop-up clinics.

National cabinet decided on Friday the aged care sector would have to report from June 15 how many staff had had COVID shots.

Prime Minister Scott Morrison said he and state and territory leaders were “leaning heavily” towards making vaccinations mandatory for the sector and had asked the AHPPC to take another look at the issue.

“We have not gone against the advice. We have referred back to the AHPPC this question on the basis of our disposition … about how this can be safely done,” he said. “There was a strong view that whatever we can do to encourage the take-up of vaccines amongst the aged care workforce and disability workforce we should be doing that and this is one such option.”

Professor Kelly said the committee would continue to monitor the situation and advise national cabinet “on any evidence supporting a future move to mandatory vaccination”.

Health Department head Brendan Murphy said more people were turning up for vaccinations, with nearly 4 million doses delivered in total by the end of this week. There was now enough capacity in the Pfizer clinics to open up eligibility to people aged 40 and over from June 8. Some states have already been offering this.

All Aboriginal and Torres Strait Islander people aged over 16 and those on the National Disability Insurance Scheme and their carers, also aged over 16, were also now eligible.

“It has been unfortunate that complacency had to be shaken up a bit by a small outbreak in Victoria but that is the silver lining in that cloud of our friends in Victoria that people are turning up,” Professor Murphy said.

National cabinet has established a new vaccination taskforce to oversee the rollout, led by Lieutenant-General John Frewen and based on the model Mr Morrison implemented under Operation Sovereign Borders.

Mr Morrison has also asked health experts to look at density limits in offices as leaders urge people to return to work in the nation’s city centres.

He said many global companies were running their workplaces based on rules set in the United States, Europe or the United Kingdom that didn’t suit the circumstances and risks in Australia.

“We would encourage private employers to move in that direction that will be good for jobs, good for the beating heart of our cities,” he said.