The Biden administration on Tuesday made tens of thousands of Central American immigrants in the U.S. eligible to petition for their children to come to the country legally as part of an effort to discourage youths from journeying to the southern border.

Shortly after taking office, President Biden ordered officials to revive the Obama-era Central American Minors program, which originally allowed certain at-risk children in Guatemala, Honduras and El Salvador to come to the U.S. as long as their parents had secured legal status in the country.

The Obama administration portrayed the program as an alternative to the often perilous trek Central American children embark on to reach the U.S. southern border. The Trump administration, however, dismantled the initiative as part of broader efforts to curtail humanitarian immigration programs.

In March, the Departments of State and Homeland Security began re-processing the cases of families whose applications had been closed. On Tuesday, the administration said it would allow new applications and significantly expand the pool of prospective applicants.

Under Obama-era rules, immigrants in the U.S. who had obtained green cards, Temporary Protected Status (TPS) and other forms of legal status were eligible to file applications for the program on behalf of their children.

In its announcement Tuesday, the Biden administration said it would expand eligibility to immigrant parents living in the U.S. with pending applications for asylum or U visas, which are available to victims of serious crimes who assist law enforcement. Legal guardians of children in Central America will also be allowed to file petitions.

The State Department said Tuesday’s expansion would benefit tens of thousands of parents and legal guardians living in the U.S.

“We are delivering on our promise to promote safe, orderly, and humane migration from Central America through this expansion of legal pathways to seek humanitarian protection in the United States,” Secretary of State Antony Blinken and Homeland Security Secretary Alejandro Mayorkas said in a statement. 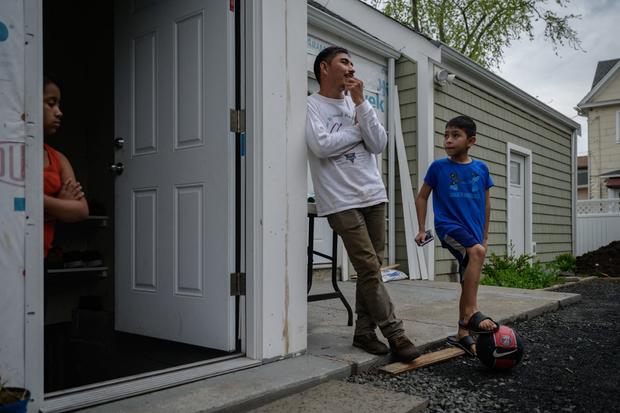 According to government officials, about 80% of the unaccompanied children who cross the southern border have family members residing in the U.S.

Created in the wake of a surge in border crossings of migrant children in 2014, the Central American Minors program was designed for people 21 and under who were fleeing violence.

After their U.S.-based parents submit applications, the children are interviewed to determine whether they qualify for refugee resettlement based on persecution they may have suffered. If they are denied refugee status, the children may still be granted humanitarian parole, which allows them to stay in the U.S. on a temporary basis.

Unlike refugee status, parole does not place immigrants on a pathway to U.S. citizenship.

Lisa Frydman, the head of international programs at Kids in Need of Defense (KIND), a non-profit serving migrant children in the U.S., welcomed Tuesday’s expansion. However, she said the policy change “did not go far enough.”

Frydman said the Biden administration should expand the initiative to children with close relatives in the U.S. like grandparents, older siblings, uncles and aunts.

“If the administration really wants to see the [Central American Minors] program alleviate pressure at the border because there’s an orderly way to bring children — they don’t have to take the journey — let’s make sure we’re getting the children who are coming,” Frydman said.