The Justice Department announced charges Wednesday against two British nationals who joined the Islamic State of Iraq and Syria (ISIS), for their role in the torture and brutal killings of western hostages, including American citizens.

El Shafee Elsheikh and Alexanda Amon Kotey are in FBI custody and were expected to soon arrive in the United States, the Justice Department said Wednesday morning. 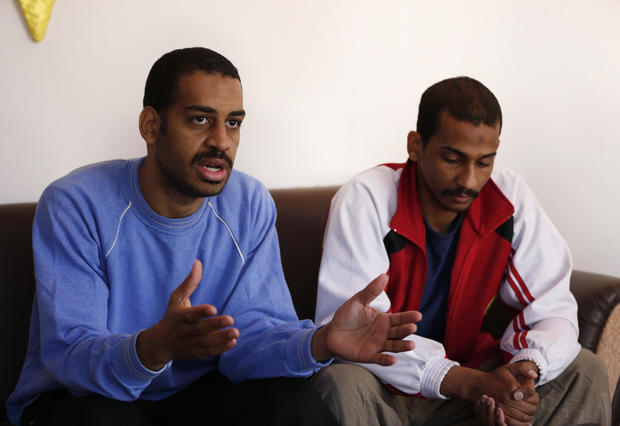 They are alleged to have been guards and interpreters for the ISIS cell, and to have participated in the mental and physical abuse of four Americans: James Wright Foley, Kayla Jean Mueller, Steven Joel Sotloff and Peter Edward Kassig. According to court documents, Kotey and Elsheikh were also responsible for coordinating the hostage ransom negotiations for Western prisoners conducted over email from November 2013 to February 2015.

“These charges are the product of many years of hard work in pursuit of justice for our citizens slain by ISIS. Although we cannot bring them back, we can and will seek justice for them, their families, and for all Americans,” Attorney General William P. Barr said in a statement. “Our message to other terrorists around the world is this — if you harm Americans, you will face American arms on the battlefield or American law in our courtrooms. Either way, you will be pursued to the ends of the earth until justice is done.”

If convicted, both Kotey and Elsheikh face life in prison.

The men were transferred from Turkey, after they were originally captured by the Syrian Democratic Forces (SDF) in January 2018 during the collapse of ISIS in the region.

They make up one half of the notorious group dubbed “the Beatles” by the hostages they held captive due to their British accents. The men have been stripped of their U.K. citizenship. A third British national, Mohamed Emwazi, also known as “Jihadi John,” was killed in a U.S. airstrike in Syria in November 2015.

The ISIS cell became infamous for releasing videos that showed Emwazi’s grisly beheadings of prisoners, including those of American journalists Foley and Sotloff, and British citizens David Haines and Alan Henning in August-October 2014. Later, in November 2014, ISIS released a video depicting the decapitated head of Kassig, and in January 2015, ISIS released videos with images of two dead Japanese citizens.

“My message to other terrorists is this—if you harm an American, you will face the same fate as these men. You will face American arms on the battlefield, and if you survive, you will face American justice in an American courtroom with the prospect of many years in an American prison,” said Assistant Attorney General John Demers of the Justice Department’s National Security Division at a press conference Wednesday. “Either way, you will never live in peace—you will be pursued to the ends of the earth. The reach of American law is long, but our memory is even longer. No matter how long it may take, we will never forget, and we will never quit.”

Prosecutors allege that in April 2014 Kotey, Elsheikh, and Emwazi forcibly moved Western hostages, including Italian, Danish and German citizens, along with two other European humanitarian aid workers, two miles from their prison to see Emwazi execute a Syrian prisoner by shooting him in the back of the head and then numerous times in the torso. Elsheikh filmed the execution and the Western prisoners who were forced by Kotey to kneel at the gravesite were holding handmade signs pleading for their release.

Elsheikh told one hostage by name, “You’re next.”

In an August letter to the U.K. Home Secretary Priti Patel, Attorney General William Barr assured her that the U.S. government would not seek the death penalty in any prosecutions brought against the two terrorists in exchange for the British government’s evidence that would help bolster the Americans’ case. Last month ,the U.K. Court ruled that the country would share its evidence on Kotey and Elsheikh with the U.S. government. On Wednesday, DOJ called that assistance “critical.”