LOS ANGELES — Last month, as the nation’s movie theaters were days from closing down, executives at Comcast Corp. ’s Universal Pictures moved on a decision that would soon pay off handsomely.

A massive marketing campaign was already under way for the studio’s April 10 release, “Trolls World Tour,” an animated sequel to the 2016 hit. The studio decided not to postpone the opening, instead of making the movie available as a digital rental on platforms like Apple Inc.’s Apple TV for $19.99.

Stocks in this Article

With nearly five million rentals, the digital release has in three weeks generated more revenue for Universal than the original “Trolls” did during its five-month theatrical run, according to a person familiar with the matter. Its performance has convinced Universal executives that digital releases can be a winning strategy, and may diminish the role of theaters even after the pandemic passes.

Hollywood has had its eye on “Trolls,” which may now offer the best ammunition yet in an industrywide push to change the way movies are released.

For years, studios have debated movie theaters over their requirement to show a movie exclusively for more than two months before screening at home, all while watching Netflix Inc. dominate at-home entertainment. With theaters closed, studios are jumping at the chance to experiment with getting first-run releases into the home sooner.

For Jeff Shell, head of the film studio’s parent division, NBCUniversal, the campaign to experiment with the digital marketplace known as premium video on demand, or PVOD, had been a goal long before he ascended to his current job, four months before the coronavirus pandemic struck.

CORONAVIRUS COULD IMPACT SPORTS FOR LONGER THAN ANTICIPATED

“The results for the ‘Trolls World Tour’ have exceeded our expectations and demonstrated the viability of PVOD,” Mr. Shell said. “As soon as theaters reopen, we expect to release movies on both formats.”

For studios, the prospect is especially alluring because they retain about 80% of the digital rental or purchase fee—compared with about 50% of box-office sales.

The same amount of revenue during a theatrical run would have required a box-office gross of $154 million, or about the final tally of the original “Trolls” movie. The sequel cost about $90 million to produce.

The original “Trolls” collected $153.7 million at the domestic box office. Universal received about $77 million of that total; about half stayed with theaters.

It is unclear how the $20 rental strategy will affect future sales of “Trolls World Tour” DVDs and digital downloads. Researchers at Universal found 51% of people who rented the sequel said they would have “definitely” seen the movie in theaters. About one-fifth said they rarely or never rent movies from digital services.

The title set digital records at platforms operated by Amazon.com Inc., Apple and Comcast’s own Xfinity service. The movie benefited from a market largely devoid of competition, since studios have postponed most releases, and families sheltering in place are seeking things to watch together.

Universal says it will deploy the same release strategy on “The King of Staten Island,” a new comedy directed by Judd Apatow that had been scheduled to hit theaters on June 19.

In March, Universal shipped four other movies to digital platforms for $20 rentals when the theaters closed: “The Invisible Man,” “The Hunt,” “Emma” and “Never Rarely Sometimes Always.” Those four movies have in total generated about $60 million in rentals to date, with about $48 million flowing back to Universal, according to the person familiar with the matter.

Before theaters closed, the highest-grossing of those titles, the horror reboot “The Invisible Man,” had collected about $64 million in the U.S. and Canada. The other three movies had made a combined $16 million. Their digital performances are the equivalent of a combined $96 million in box-office grosses.

IN THE AGE OF CORONAVIRUS, DRIVE-IN MOVIES MAKE A COMEBACK

But for expected blockbusters like a “Fast & Furious” installment, a wide theatrical release remains too lucrative to pass up, Hollywood executives say. Universal and its rivals have postponed the release of many tentpole releases by several months, in some cases into next year, as they await theaters being open again.

Meanwhile, studios are pursuing digital-release strategies that generate rental revenue and boost the profile of their own new streaming services.

Warner Bros. is pursuing a hybrid model, offering digital rentals and downloads for “Scoob!” while also promoting its new HBO Max streaming service, which is to cost $14.99 a month and will pick up “Scoob!” to stream after its digital release. The company also bought the rights to stream on HBO Max a forthcoming Seth Rogen comedy called “An American Pickle,” which was originally set for release in theaters by Sony Pictures Entertainment later this year.

For “Artemis Fowl,” a Walt Disney Co. summer release skipping theaters, the studio decided to forgo a digital rental window and instead push it straight to its Disney+ streaming service, hoping to drive $6.99 subscriptions.

When Mr. Shell came to Hollywood to run the Universal film operation in 2015, he was known as a Comcast lifer, a “cable guy” unafraid to rankle theater owners in his quest to get movies to consumers at home faster than usual. Soon after his arrival, his team began drafting plans to shake up the distribution model, detailing ways to sell various models to directors and consumers, according to people familiar with the plans. 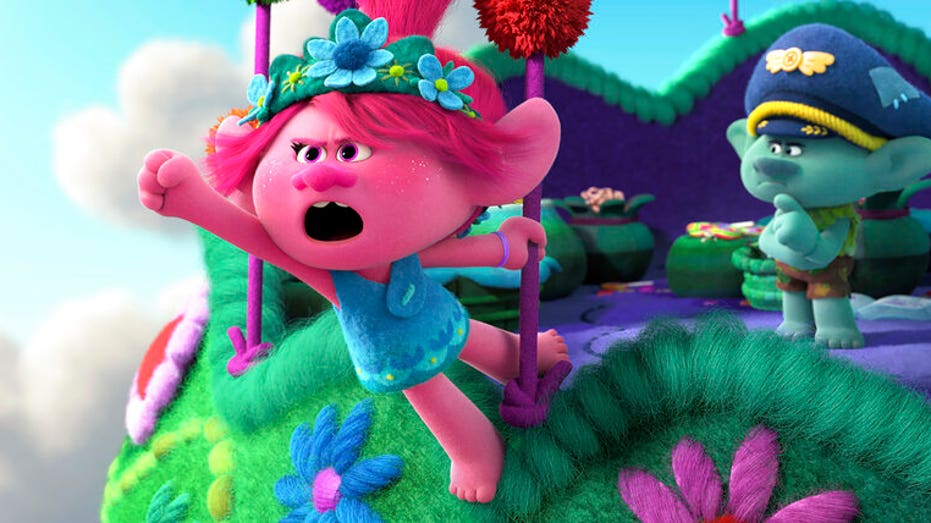 This image released by DreamWorks Animation shows characters Poppy, voiced by Anna Kendrick, left, and and Branch, voiced by Justin Timberlake in a scene from the animated film “Trolls World Tour.” The coronavirus pandemic has cracked Hollywood’s tra

The studio never shortened the window of a major release, however, as exhibitors maintained their refusal to book any movie that didn’t grant them exclusivity for about 75 days.

The pandemic, though, finally cleared the way to push such changes through.

When Universal announced its “Trolls” release plan in March, exhibitors accused the studio of taking advantage of the pandemic to advance its long-term goal, and said practices would return to normal after the theaters reopen.