This week our reviewers hear the latest from pop queen Natalie Imbruglia, the dream-like tones of Sufjan Stevens & Angelo De Augustine and are blown away by the five star-worthy jazz of James Brandon Lewis.

Build It Better was the obvious opening track for Natalie Imbruglia’s first album since 2015 – the same year the Western Bulldogs suffered a narrow elimination final loss and Melbourne finished 13th on the ladder. Imbruglia, somewhat like those two AFL teams who meet in the grand final on Saturday, has been hard at work on a comeback. Also the first single from Firebird, Build It Better finds Imbruglia mostly upbeat, singing, “I’ll be OK, more than OK,” as a punchy tempo and sparse piano introduces the first of 13 new songs. “Nothing lasts forever, when it all falls down, gotta build it better,” she sings, 23 years after scooping the ARIA awards. 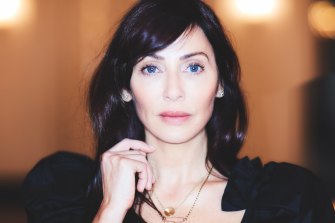 Natalie Imbruglia returns to writing her own songs, now about change, growth and not being sorry.Credit:Simon Procter

Despite another lengthy break between albums, Imbruglia brings her familiar windows-down, wind-in-the-hair style to Maybe It’s Great, a song she co-wrote with the Strokes’ Albert Hammond Jr. Producer Francis “Eg” White, who first worked with her on 2005’s Counting Down the Days, returns, mixing a layer of older, tried-and-true formulas with the new. It’s a theme played out across the album, along with recurring notions of change, growth and not being sorry.

It’s been more than a decade since Imbruglia’s last album of mostly self-penned songs, Come to Life, and six years since she released Male, an unimaginative title hinting that what you’ll find inside are songs originally sung by men. Her tackling widely adored tunes such as The Cure’s Friday I’m in Love and Cat Stevens’ The Wind came out of the blue, and yet there was a genuine energy and passion that Imbruglia brought to the Male project. Her voice, always fresh and summery, would rarely be mentioned in the same sentence as Pete Townshend, but her cover of Townshend’s Let My Love Open the Door was a genuine example of an artist not afraid to leave her comfort zone.

And now, after battling a self-confessed period of creative inertia, she’s come out the other side with an album largely recorded in lockdown. Nothing Missing and Just Like Old Times bring out the best in Imbruglia’s voice and come closest to the magic she struck with her biggest hit, Torn, itself a re-working of the 1995 song by Californian band Ednaswap (and first recorded two years earlier by Danish singer Lis Sorensen). All these years since Torn, Imbruglia is not only writing songs again, she’s still in the game, and Firebird is a proud confirmation of that and more. MARTIN BOULTON

These days a new Sufjan Stevens album does not feel as big a deal as it once did – around the time of Illinois and Michigan in the mid-2000s, for example. And this collaborative record, of course, is not a Sufjan Stevens album per se, and yet such is its beauty that it stands up against anything the 46-year-old American has done.

A Beginner’s Mind has less of the heaviness of Stevens’s exhausting 2020 album Ascensions, and more of the exquisite melodic intimacy of his landmark LP Carrie & Lowell (2015). In Angelo De Augustine, who has released two albums on Stevens’ Asthmatic Kitty label, he has found a partner whose style chimes perfectly with the hushed lo-fi side of his musical persona. The pair’s entwined vocals are like a choir of whispers, with De Augustine’s falsetto probably the more prominent on these quiet, largely acoustic-based songs.

There is also sublime song-writing here: Lady Macbeth in Chains is a minor masterpiece, and perhaps one of the songs of the year, while The Pillar of Souls and Olympus are similarly strong. A dreamlike softness ripples through everything, as it so often does with Stevens. BARNABY SMITH

The inspiration is moving enough, and that’s before we reach the music, itself. Saxophonist James Brandon Lewis has penned a suite in tribute to US visionary, scientist, inventor, educator and artist George Washington Carver. In 1906 Carver hit upon the idea of the Jesup Agricultural Wagon, a kind of mobile knowledge centre, which spread learning and farming products among the South’s impoverished farmers.

Lewis tells this extraordinary man’s story in an idiom in which jazz, folk and the very earth seem to combine to make music that is completely organic rather than mannered in any way. Those who’ve been gobsmacked by Kamasi Washington’s playing should hear Lewis take tenor saxophone artistry to an altogether higher plane of consciousness. His sound is vast, and his ideas have a deep beauty independent of the need for a veneer of prettiness.