Before a jubilant crowd of hundreds at the Brighton Bowling Club in Melbourne’s inner south, Daniel, 49, claimed victory and promised to be an “honest broker from the cross benches” of parliament.

In her victory speech, Daniel referenced Australian suffragette Vida Goldstein, after whom the electorate is named.

“One hundred or so years ago there was a woman called Vida Goldstein. She was an internationally renowned suffragette. She was the first Australian in the Oval Office. She ran as an independent several times because she was so independent that she couldn’t bring herself to run for either of the major parties,” she said.

“Vida was not elected. This seat is in her name, and today I take her rightful place.”

After an acrimonious campaign in which the two candidates refused to use each other’s names, Daniel described her victory as a testament to the health of Australian democracy.

“This will bring hope” she said. “I am here to bring about progress.”

With about 45 per cent of the vote counted, the Australian Electoral Commission (AEC) has Daniel on a projected vote after preferences of 56.6 per cent to Wilson’s 43.4 per cent.

It was a dramatic reversal for Wilson, who has not conceded. He won the seat with a primary vote of more than 52 percent in 2019. In this contest against a so-called teal independent, he needed a primary of 45 per cent or more to hang on, but his vote crashed well below that into the 30s. 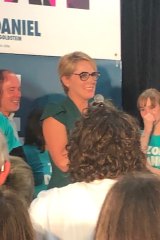 Independent Zoe Daniel has claimed victory in the race for the seat of Goldstein.Credit:Royce Millar

Daniel was attracting the bulk of Labor and Green preferences.

After Daniel made her victory speech, Wilson took to the stage at his event to address the remaining faithful supporters.

“Tonight is going to be one thing – long,” he said. “The good news is despite the challenges we face, we are still, I think, in a very competitive position to go down to the wire and make sure we hold the federal electorate of Goldstein.

“The reality is that there are so many results we do not know. That isn’t out of a blind faith or hope that somehow things are going to turn around but a simple, practical reality based on history.”

He said it was irresponsible to call the seat, but by 9.30pm some of his supporters were shedding tears.

“There’s still a lot of votes to be counted, we’re still waiting for some major booths out of Brighton and Beaumaris,” campaign spokesman Sam Schiphorst told the room at Black Rock Yacht Club just after 9pm.

“None of the pre-poll has been counted, none of the postal votes have been counted. Over half the electorate voted early this campaign, so it is too early to be looking into the numbers in too much detail.”

A crowd of about 100 supporters cheered when Schiphorst said “we are 100 per cent in this race and we’re going to fight it out until the end”.

At Daniel’s election night celebration, campaign director Keith Badger said they had raised more than $1 million and the Simon Holmes a Court fund-raising vehicle Climate 200 tipped in about $500,000.

“Never doubt that a small group of committed citizens can change the world,” Badger told the crowd of hundreds.

Wilson has refused to disclose how much he is spending or where the money is from.

Goldstein, which takes in suburbs including Brighton, Sandringham, Highett and Bentleigh, has been among the safest of Liberal seats, held since federation 121 years ago by conservative male MPs. 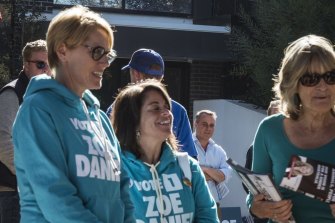 Wilson, who is also the assistant minister for industry, energy and emissions reduction, first won Goldstein in 2016 by a record margin, then retained it in 2019 with 52.7 per cent of the primary vote, despite a swing against him.

He has run hard on issues including economic management, national security – claiming Australia is in “its most dangerous decade” – and the Coalition’s technology-led approach to cutting emissions.

To prevail again in Goldstein he needed to hold on to bayside Liberals, a group often characterised as well-educated, small-l Liberals, interested in issues such as the environment and refugees.

Daniel, a Hampton mother of two, banked on a good proportion of these same Liberal voters being sufficiently disillusioned to back a respectable, centrist independent.

When she announced her candidacy in November, Daniel made Goldstein a real contest – arguably for the first time.

She is one of the so-called teal independents that contested Coalition seats across the country, some a part of the “Voices” movement inspired by Cathy McGowan, the former independent member for Indi in northern Victoria, and some supported by Climate 200.

Daniel, backed by a local Voices group and hundreds of volunteers, has described herself as a disruptor of the two-party, male-dominated political order.

Her policy priorities have been a 60 per cent emissions cut by 2030, a federal integrity commission with teeth, and action on gender equality.

The Goldstein campaign has been unusually bitter, marked by heated rows over the local council ban on election signs, vandalism of signs and allegations of anti-semitism.

The Coalition have alleged the teals are “fake” independents and a phantom political party of Labor stooges controlled by Climate 200.

Her policy priorities have been a 60 per cent emissions cut by 2030, a federal integrity commission with teeth and action on gender equality.

The Goldstein campaign has been unusually bitter and marked by heated rows over the local council ban on election signs, vandalism of signs, and allegations of anti-semitism.

The Coalition have alleged the teals are “fake” independents and a phantom political party of Labor stooges controlled by Climate 200.

Daniel has dismissed those claims as a Coalition “construct”, repeatedly stressing that she has never been a member of a political party and has always been a swinging voter.

She has said she is open to dealing with Labor or the Coalition in the case of a hung parliament.

Early in the campaign it became clear that Labor was effectively running dead in Goldstein. despite preselecting a credible young candidate, Martyn Abbott. The same can be said of the Greens and their candidate, Alana Galli-McRostie.

Nine candidates nominated for Goldstein including from minor parties One Nation, the United Australia Party and the Liberal Democrats.