As The Huxleys stroll through Fitzroy Gardens on a crisp winter’s day, dressed as sparkly golden Bowie-dropped-acid-and-dreamt-this disco cats, even the coolest Melburnian eyebrows shoot up a few millimetres. 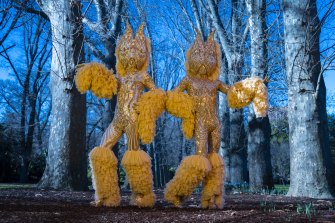 Performance artists The Huxleys are launching a new album along with an exhibition featuring them in bizarre costumes in striking locations.Credit:Wayne Taylor

“I love the idea that maybe someone will see us being so extreme and unapologetic and maybe they think ‘yeah that’s ok, I can do this too’,” says Will Huxley, the more voluble of the romantic and artistic partners, from within his vintage sequin fabric and hand-tied tulle concoction.

“It gets people out of their life for a moment. It’s something really different.”

Six years ago, the performance art duo pleasantly scandalised a Dark Mofo crowd by staging an over-the-top glam rock show with dancers, pyrotechnics and a complete lack of any actual music.

“It really confused people,” grins Will.

Many, many hours slaving over the lycra scissors and the glitter gun later, there is progress to report. They have their first commercial gallery art show about to open, Places of Worship at the Murray White Room at Melbourne’s Centre for Contemporary Photography, featuring photographs of the pair in weird costumes in natural settings across the country from the Pink Lakes of Mildura to the snowfields of Mount Stirling. 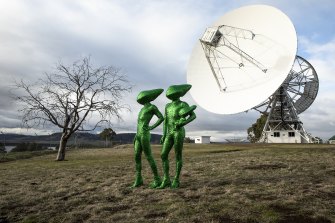 Distress Signal by The Huxleys.Credit:The Huxleys

And their fictitious band SOS (Style Over Substance) is releasing an album to coincide with the show, with soundscapes that match the photos, plus a disco single telling the story of The Huxleys growing up as queer outsiders in Australian suburbia.

The accompanying music video will join the permanent collection at the National Portrait Gallery. 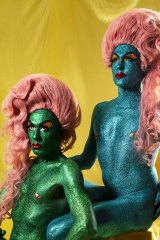 Places of Worship by The Huxleys.Credit:The Huxleys

“We always wanted to be glam rock stars,” says Will. “We’ve worked with some musicians (Sex on Toast’s Angus Leslie and Jazz Party’s Jules Pascoe) to create this disco song. It’s like all our fantasies together.”

The pair cite David Bowie, Elton John and Freddie Mercury as creative inspiration. Not just for their music and an unerring sense for the fabulous, but for showing how to overcome adversity and discrimination through character.

“We grew up in suburban places,” Will says. “I felt really out of place as a different queer kid. When I first saw David Bowie or Grace Jones or Prince, these incredible people, I’d just think ‘there’s an escape for me’.

“You were able to step out of being a shy, awkward, bullied queer kid into this fantastical character… Creating this spectacular beautiful alter ego enables me to get on stage, it’s a theatrical expression of something inside you that you were too scared (to show).

“Our work is very much about escaping from the everyday world and creating a beautiful spectacle.”

Garrett agrees.“It’s strange to describe it but there’s a character within each costume,” he says. “This is a slow costume, or this costume is crazy. Costume is powerful.”

And the vinyl will be launched at the opening of the show where they will, at last, perform live.

“It’s going to be such a catharsis,” Will says. “We’ve wanted to party for a year. I might come out too much. It might put people off!”

Places of Worship is at the Centre for Contemporary Photography in Fitzroy from July 8-11.