Cocktails, curlers and the rise of the hair salons where you can party the night away

Dressed to the nines in a party dress and gold heels, I am sipping a drink and laughing with a friend as we debate what to order next from the barman. So far so festive, but I’m not at a Christmas party.

In fact, it’s only noon, my hair’s in curlers, and we’re in one of London’s most exclusive hair salons.

Jack, our stylist-slash-waiter, wields a hairdryer more effectively than James Bond ever fired a gun, and pours pink champagne with as much style as 007 shakes a vodka martini.

It’s all part of the service here at Jo Hansford, located in top department store Harvey Nichols — just one of a growing number of salons that are now offering a fully-fledged Christmas party, complete with a licensed bar, while you get ready for . . . well, your next Christmas party. 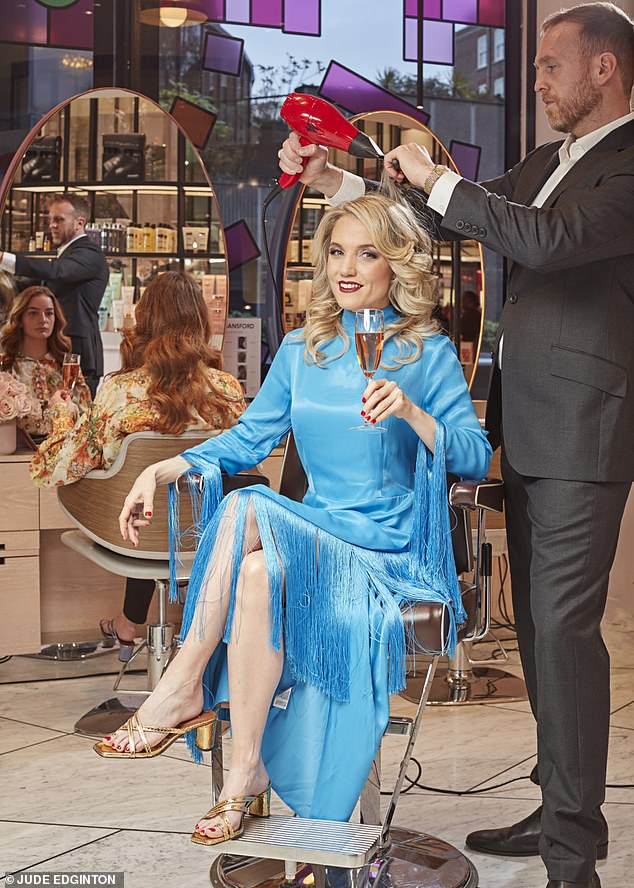 A growing number of salons are offering a fully-fledged Christmas party, complete with a licensed bar while you get ready. Pictured: Emily Hill at Jo Hansford in Harvey Nichols

All women know that getting ready with your girlfriends, sharing make-up and copious amounts of wine, is often the best bit of the evening.

Now, rather than doing this at home, and ending up with wonky eyeliner applied once already tipsy, we can do it in style.

In the old days, we got excited at being offered a single glass of warm champagne while having our hair done. But this is a new — and fabulous — world.

Some of these super salons even have private members’ clubs on the premises.

‘Many of our clients said they spent so long in leisure-wear during the lockdowns, and saved money by not buying clothes or going out to nice places, that they are making up for it and want the works!

‘It’s as if we’ve all had this collective realisation that life is short, we need to make the most of it and remember to have fun.’

This December, the popularity of pre-party salon celebrations has captured the imagination. After the misery of having Christmas cancelled for the first time in 2020, we may be ever so slightly over-compensating in 2021.

Ricky Walters is a ‘pioneer in cosmetology’ (the science of beautifying hair, nails, and skin) who has tended the tresses of Sandra Bullock. He was also an early adopter of this trend, opening Salon64, ‘a social hub for the 21st-century trendsetter’, in West London in 2017.

He agrees that its popularity is soaring this year. 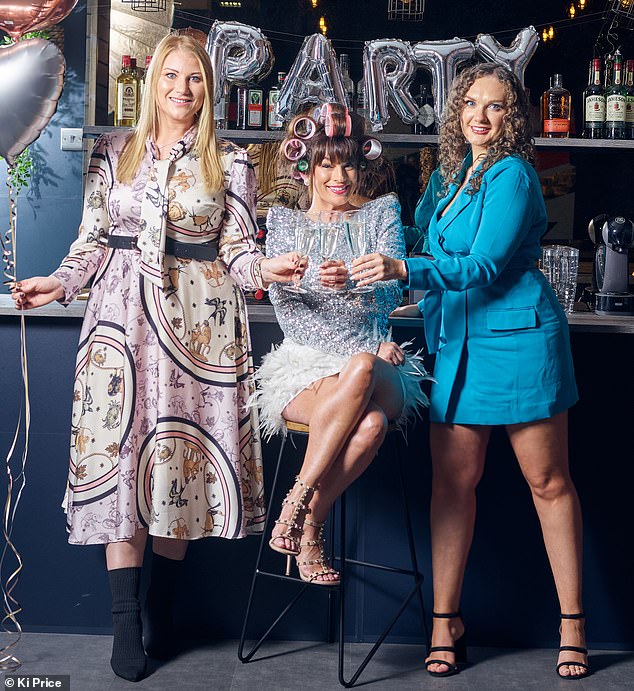 Rachel Foster, 35, who works in PR, says getting dressed up to go out feels more important this year. Pictured: Rachel Foster kicks off Christmas celebrations with her friends at Beards And Brows in Altrincham, Greater Manchester

‘We’ve seen huge numbers of group bookings,’ he says. ‘Make-up artists, blow-dries, cocktails and canapés — we have it all covered. Ladies don’t want to be cramped in a friend’s flat all fighting over an undersized mirror, rushing to do their make-up and hair.’

Once his team have primped and preened clients, at 7pm the salon transforms into a private members’ club and the party goes on until 11pm.

Of course, it’s also convenient for the salon owners, who make the most of a captive audience by flogging us fizz while our hair is being expertly de-frizzed.

Ricky feels that the rise in demand is in part driven by so many people working from home. ‘Many city dwellers have moved out to the suburbs,’ he explains. ‘So groups of friends need one central location to get their glam on in a “home away from home” setting.’

Rachel Foster, 35, who works in PR, says getting dressed up to go out feels more important this year.

She booked her Christmas hair party at Beards And Brows in Altrincham, Greater Manchester, a brand-new salon which has a bar and DJ booth built in the premises so you can enjoy a dance as well as a cocktail with your blow-dry.

She says: ‘We decided to start our work party at the salon before a meal at The Ivy and a night of karaoke, because we wanted to put the fun back into everything.

‘I’ve got two small children. Before lockdown, I probably would’ve forgotten to brush my hair before the annual Christmas party, never mind booking into a place with an on-site bar and DJ.

‘But like everyone else, I spent 18 months sitting at home in comfy clothes, social distancing and now we can enjoy ourselves again.

‘Getting ready to go out together used to be the best part of the night. 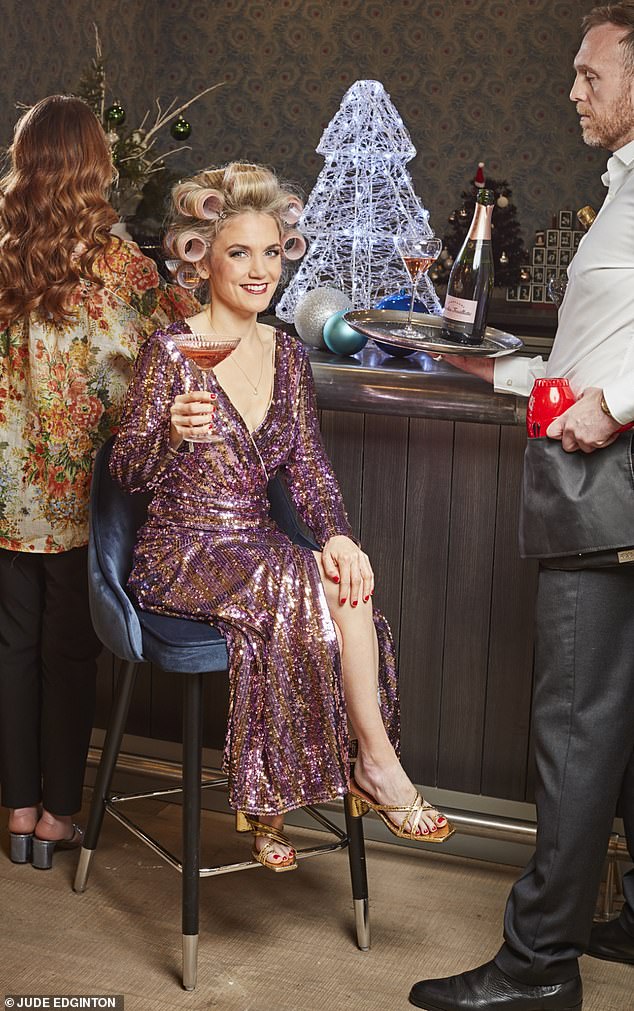 ‘And if you think about how many separate appointments all the girls need to get ready for a big night out, it makes sense to get them all done at once with a salon deal which also offers bottomless prosecco.’

At Beards And Brows, treatments stop at 8pm but customers can carry on partying until closing time at 11pm.

Andrew Sharples, the salon’s creator, started offering pints on his premises after going to get his hair cut with his ex-girlfriend: although he was finished after half an hour, he had to wait outside for another three and a half hours before she was done.

Beauty Club, with celebrity stylist Moe Harb, is another new favourite in London’s Oxford Circus, catering for non-Londoners travelling to the capital, who need a one-stop make-over shop (hair, nails, the works) before their night out.

‘We take the concept of a “nail bar” quite literally,’ says Jennifer Read-Dominguez, the salon’s co-founder. ‘Cocktails are matched to your nail design — French manicure to fizz, mojitos to manicures. We have a disco ball, DJ and mixologist on the premises.’

Beauty Club’s customers range from groups of elegant women heading out for a nice meal to models and television stars.

Even whole families can go together for a festive treat. Andy, of Andy’s Salon in upmarket Wimbledon, tells me: ‘We offer pre-Christmas parties for the whole family — in one hour, we can get clients cut and blow-dried with instant repair hair treatment and perfect nails.’

Which sounds like more fun than last-minute present-wrapping or sitting at home with mum and your sister peeling mountains of spuds ahead of Christmas lunch.

The new salons are seriously glam spaces, with decor worthy of any cocktail bar. 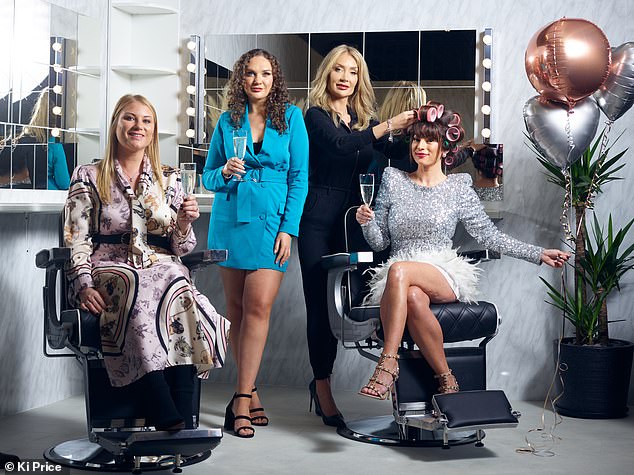 Emily says standing under mistletoe with your tenth mince pie feels better when you’ve had a relaxing hour in the salon chair. Pictured: Rachel and friends at Beards and Browns

Harvey Nichols, where I went for my own hair party, has both a blow-dry bar in the heart of the department store and a larger salon upstairs where you can get your colour done and sip champagne at a bar with foils in your hair.

Treatment spaces include a Conditioning Bar, Hairdressing Rotunda, Eye Zone, and a Hair Extension Library —which doesn’t sound half bad if you’re a Saudi princess and want to book the whole place out to prep for an evening with your girlfriends.

But what about if you’re just a normal woman who wants to look her best before attending a Christmas party?

After finishing our champagne at Jo Hansford x Harvey Nichols, my friends and I stopped by a bar in Knightsbridge before heading to our first drinks party of the season.

And I must say, standing under mistletoe with your tenth mince pie just feels better when you’ve had a relaxing hour in the salon chair, caught up on all the essential gossip with your best friends and know you are looking your very best.

The year 2022 might see me swap party-parties for pamper-parties permanently — particularly with all that pink champagne flowing.