From sunning himself on holiday with Kourtney Kardashian to sitting front row with Olivia Palermo, Simon Huck’s life is worthy of any A-lister.

But the chances are, unlike his ultra famous friends, you have probably never heard his name.

Simon, 38, has worked his way up the ranks of the cutthroat celebrity PR industry and now owns a firm that works with clients on public speaking engagements, events and brand partnerships.

His company benefits from Simon’s connections with the Kardashians, particularly Kim who described him as one of the most ‘loyal’ people she knows.

Indeed in a sign of their friendship, Kim was asked to deliver a speech at Simon’s star-studded nuptials over the weekend. 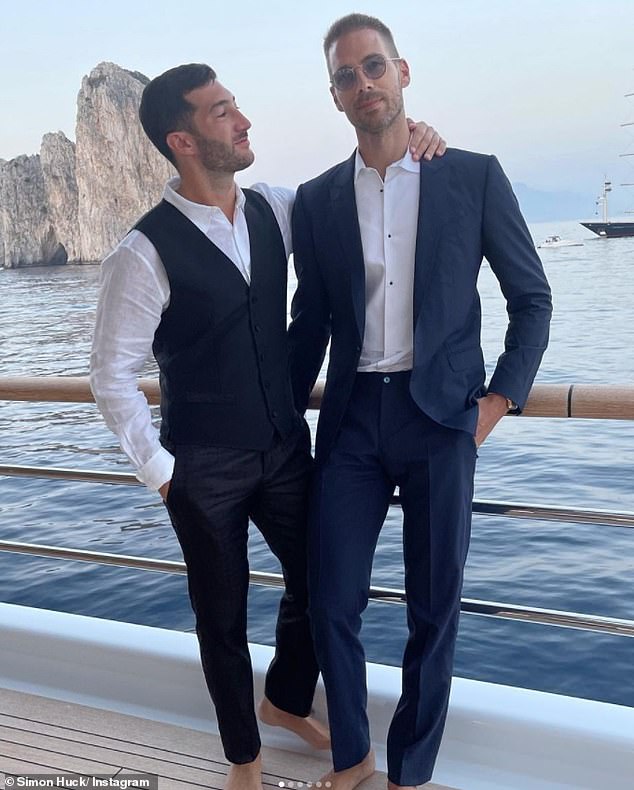 Loved-up: Kardashian BFF and PR guru Simon Huck tied the knot with boyfriend Phil Riportella, a finance executive, pictured together in Capri, at the Hotel Bel-Air, Los Angeles, on Friday, 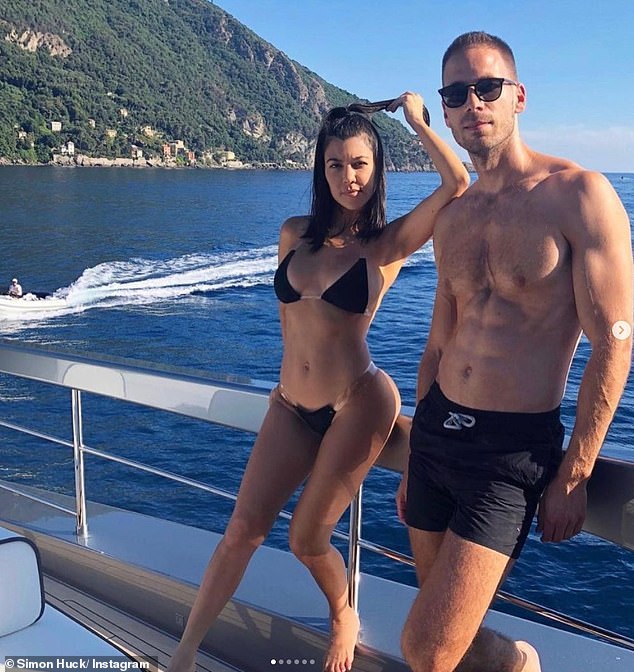 Jet-set: Simon is friends with all of the Kardashians but is particularly close to Kourtney and Kim. Pictured, Simon and Kourtney strike a pose while soaking up the sun on a yacht 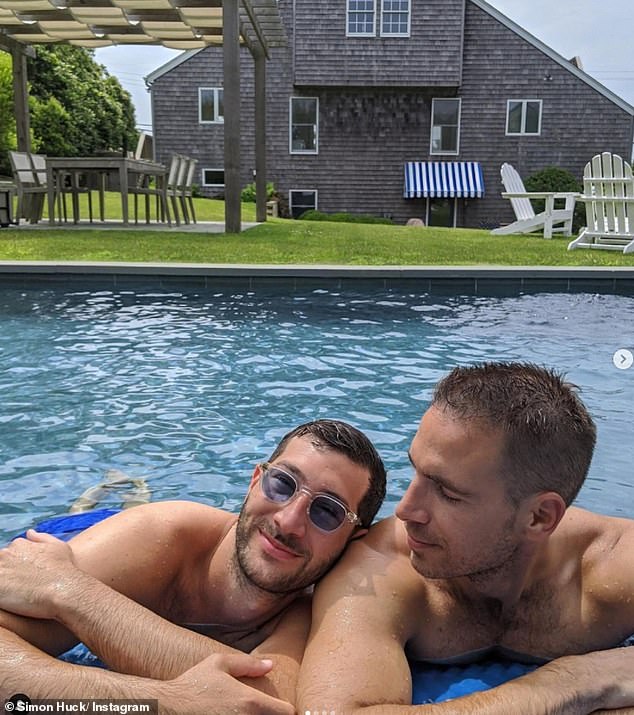 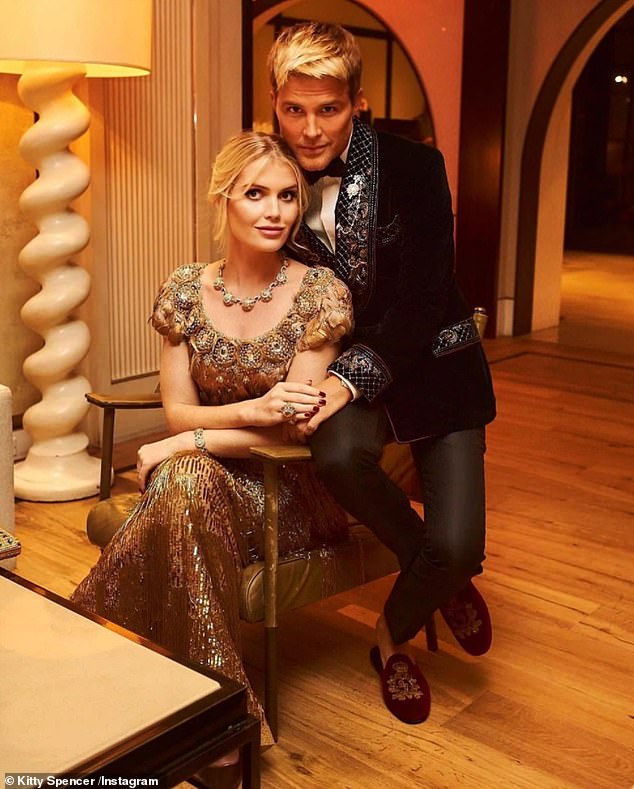 Unlike many Hollywood power players, Huck did not grow up surrounded by showbiz.

He later enrolled in at Queen’s University in Kingston, Canada, where he embarked on a degree in political science.

In 2005, he decided to pursue a career in PR after coming across a photograph of publicist Lizzie Grubman kissing John Mayer in US Weekly, according to the New York Times. 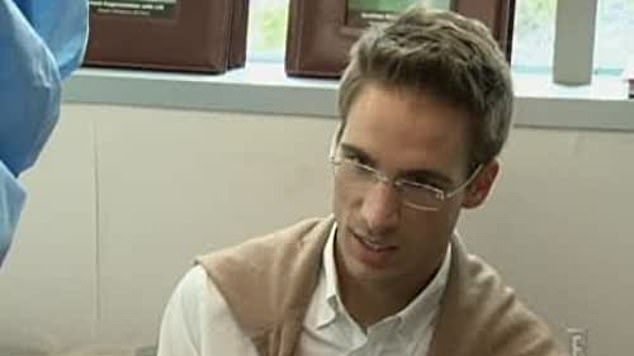 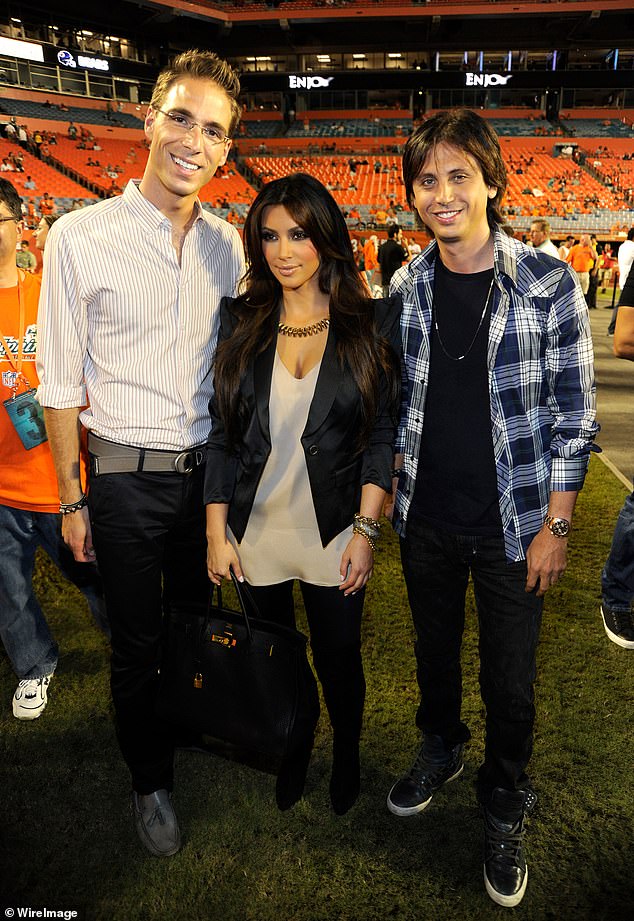 Old friends: Simon and Kardashian plus-one Jonathan Cheban, right, with Kim Kardashian in 2010. The pair, then working together at the same agency, knew Kim before KUWTK

‘I went home, spent 24 hours on Google researching everything about P.R. and found Lizzie’s number,’ Mr Huck said. Two days later he flew to New York for the first time for a brief meeting with Ms Grubman’s CFO.

‘I was bumbling all over the place,’ Mr. Huck said. ‘I left the office and I remember doing a Myspace upload in the elevator.’

But it was enough to impress. That same day he received a call from Jonathan Cheban, Mr Huck’s one-time business partner now best known for his close relationship with the Kardashians, who at the time was working with Ms Grubman.

After being offered an unpaid internship, Mr Huck left his college apartment, packed a bag and headed to New York, where he spent two years sofa surfing.

One of his first projects was working on Sean Combs’s White Party. 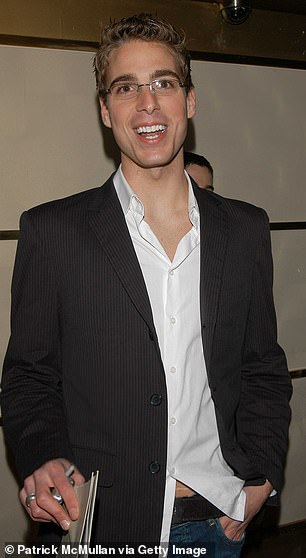 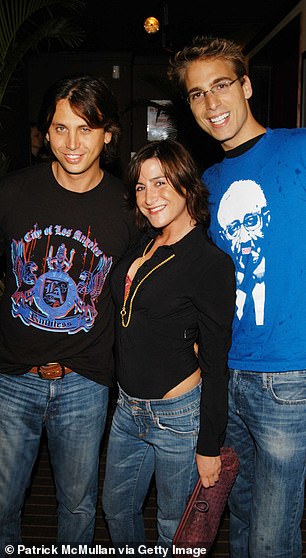 Early career: Simon in 2005, left, the year he got his start in PR working with well-known publicist Lizzie Grubman in New York. Right, with Jonathan Cheban in New York in 2006 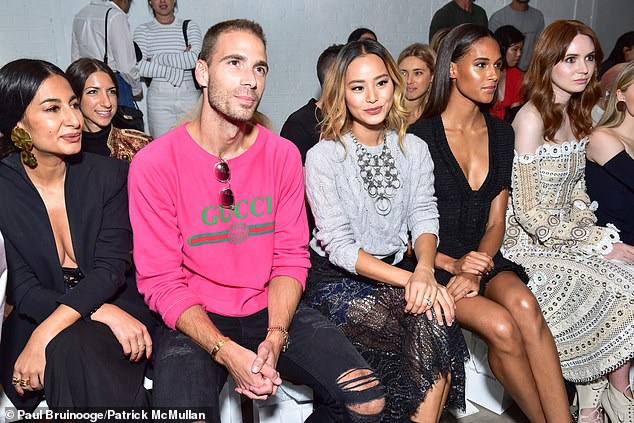 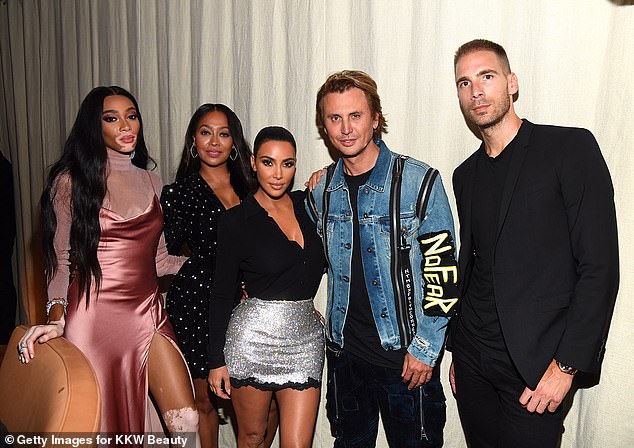 Strike a post: Simon and Jonathan with Kim, Winnie Harlow and LaLa Anthony in NYC in 2019 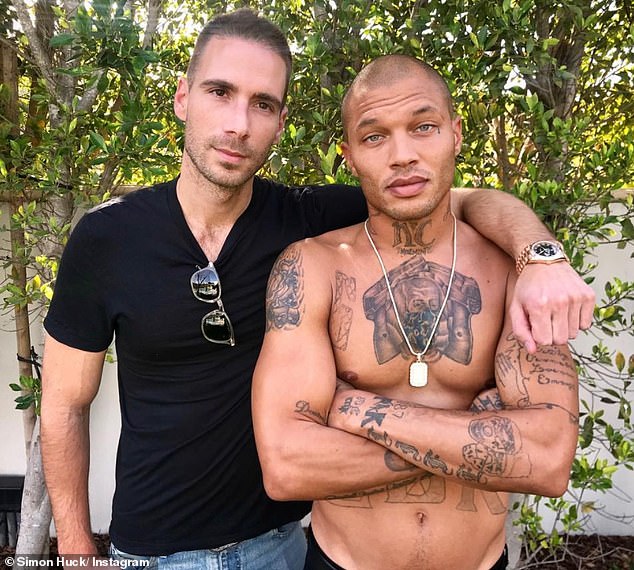 Who’s who: PR guru Simon has rubbed shoulders with everyone, including ‘hot felon’ Jeremy Meeks, pictured, in 2018

In 2006 when Mr Cheban returned to Command PR, the company he had founded in 1999, Mr Huck went with him.

The hotshot PR duo befriended Kim Kardashian and her sisters before they had even filmed the first episode of their reality TV show, Keeping Up With The Kardashians, which ran for 14 years and 20 seasons until coming to an end this year.

‘He’s always been there at times when I’ve needed him,’ Kim Kardashian once said about Simon. ‘He’s the definition of loyal. I feel like you need to surround yourself with people who make you laugh and keep your spirit alive as you grow and evolve.’

With Kim’s backing, Jonathan and Simon went on to star in reality show Spin Crown, executive produced by Kim Kardashian for E! Entertainment Television, the home of Keeping Up.

Cameras followed Mr Cheban, Mr Huck and members of their team and offered fans a glimpse at what goes on behind the scenes at a high end celebrity PR agency. 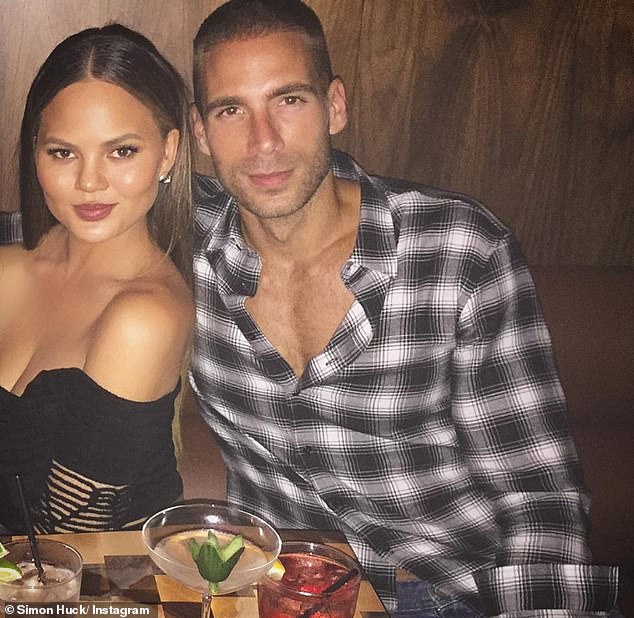 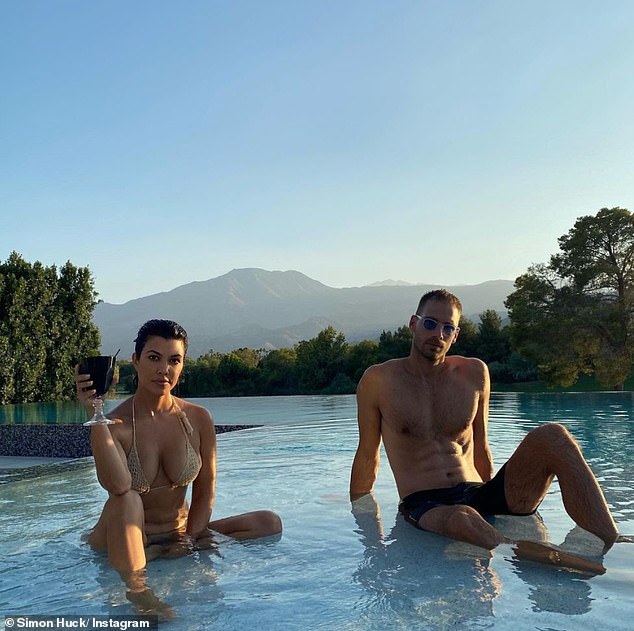 BFFs: Simon Huck on holiday with Kourtney Kardashian, one of his closest friends 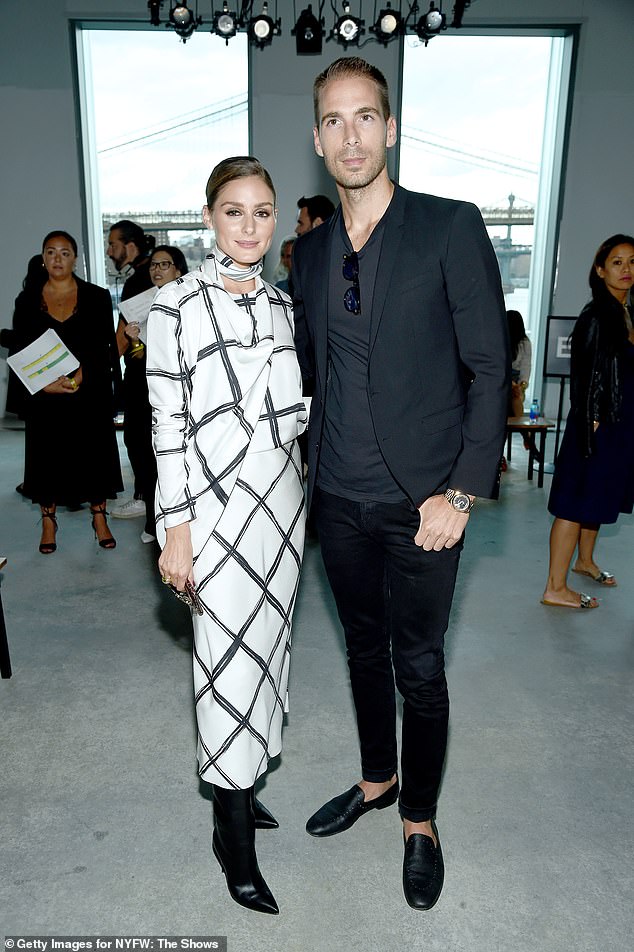 However not even Kim’s golden touch was enough to make the show a success and the Spin Crowd was cancelled after one season.

Despite the setback, Mr Huck’s career went from strength to strength. In 2010, he became a partner in Command PR and three years later bought Mr Cheban’s share of the business to become the principal owner. In 2017 the company was relaunched as Command Entertainment Group.

Mr Huck splits his time between California and New York, where he owns properties in Greenwich Village, Manhattan, and Montauk, Long Island.

Simon has previously revealed he travels between the two by seaplane, which reduces his commute from ‘five hours in rush hour’ to 45 minutes.

His days are as charmed as one might expect from a man in his position. In a 2017 interview, he revealed he woke up at 5am every day, had a meal cooked by a chef at home by 9am, took calls at Soho House and squeezed in an afternoon session with his personal trainer at 3pm. 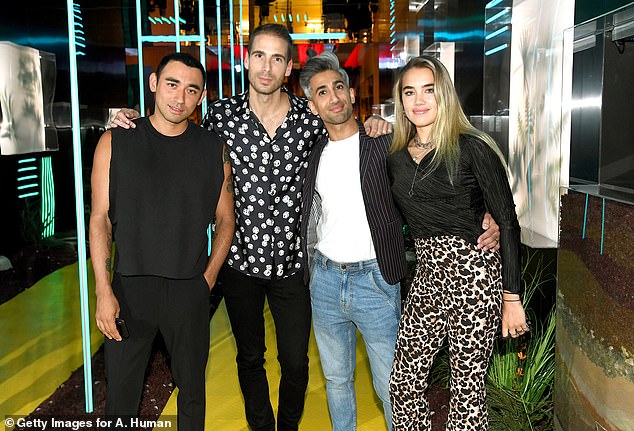 Starry friends: With fashion director and editor Nicola Formichetti and Tan France in 2018 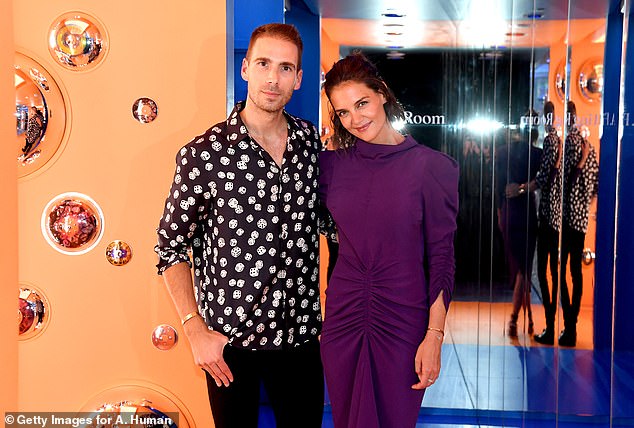 A-listers: Simon strikes a pose with Katie Holmes at an event he hosted in New York in 2018 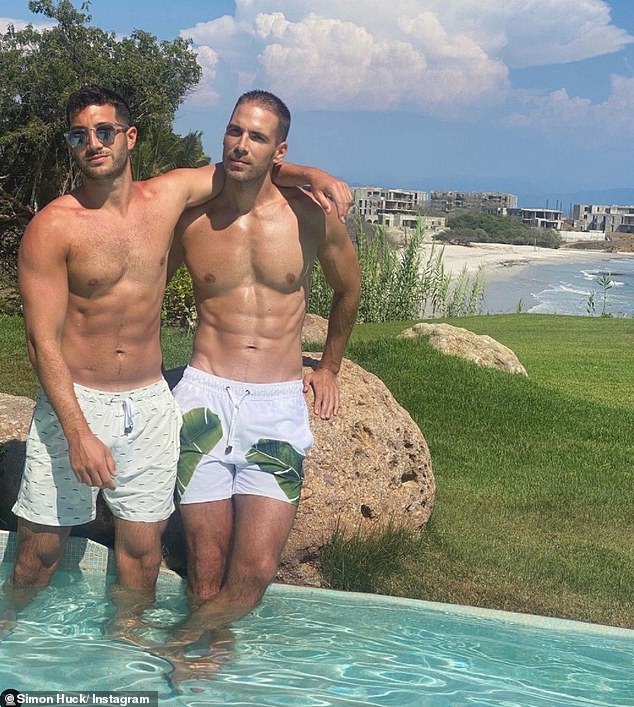 Ripped: Simon, pictured with his husband, has spoken about the work it takes to stay in shape

‘I used to be really skinny—if you look at some of my Spin Crowd photos you can see that I was very skinny,’ Simon, who is now noticeably muscular, said in the interview.

‘I know it’s kind of eye-rolling to say but I felt that I was at a point where I needed that intervention. It was really Janine, my chef, who got me eating properly and well-balanced meals. By 9 o’clock I have had a full meal. I mean we’re talking chicken breasts, rice, vegetables, like a full situation is happening.’

When not in meetings or taking calls from clients, Mr Huck enjoys jetting off on holiday to exotic locales.

Somehow, between all of this, he also found time to plan one of the year’s starriest weddings, complete with personalised menus and individual guest caricatures that were hung on the wall. 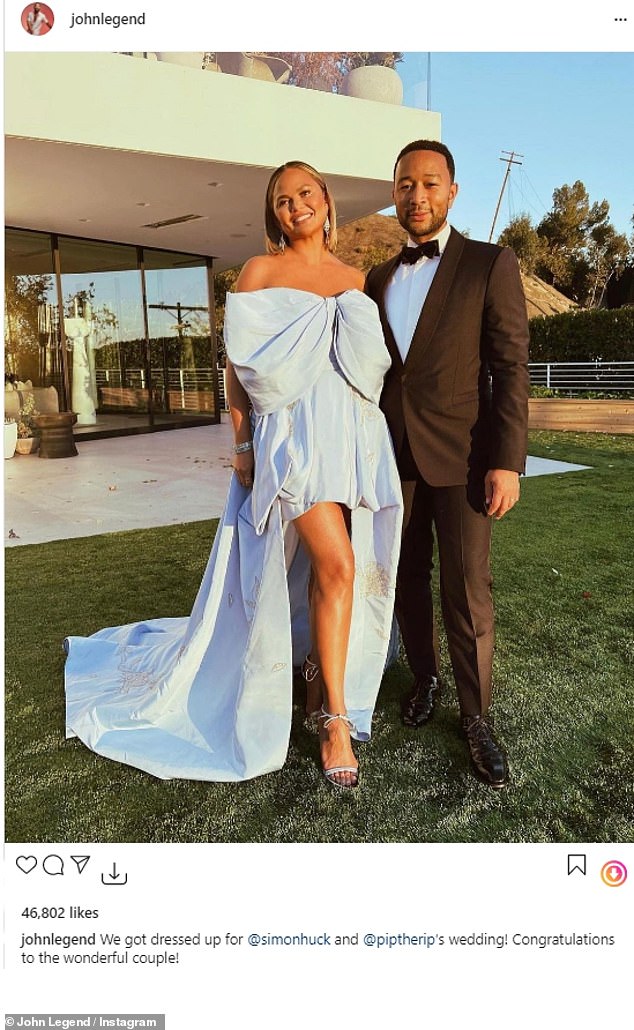 They sure glam up well: Chrissy shared this image with John Legend from Simon’s wedding 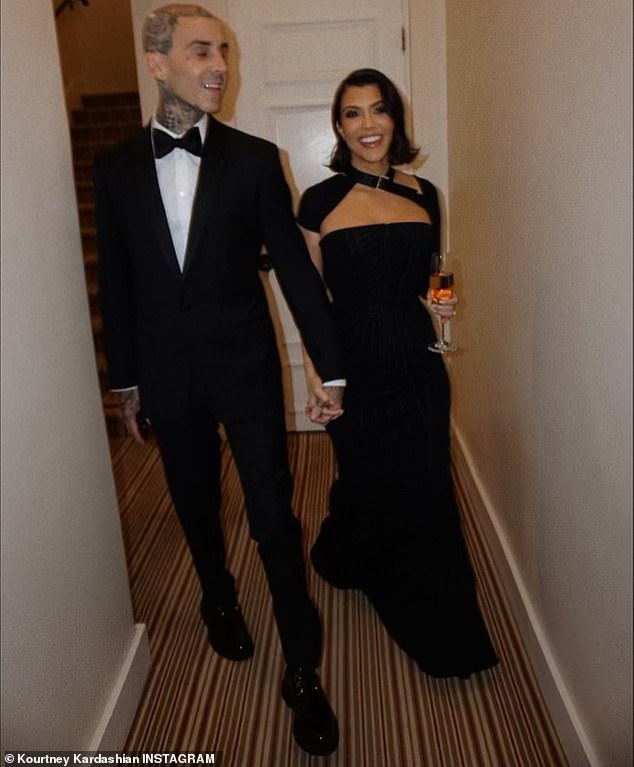 Beforehand: Kourtney Kardashian, who attended on the arm of her latest fiance Travis Barker of Blink-182 fame, is pictured with him on Instagram in their looks for the night 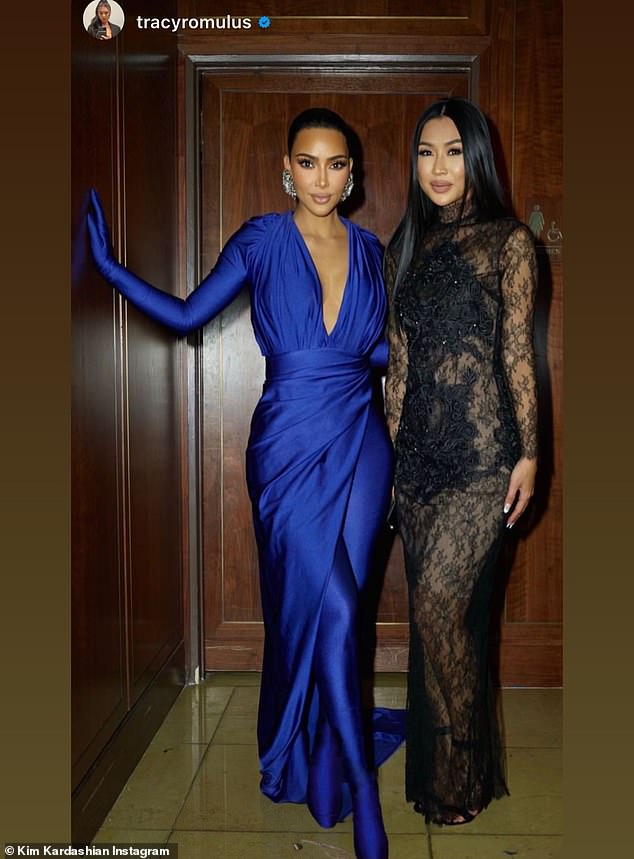 Breathtaking: Before they swung by the wedding Kim had showed off her sensational look on her friend Tracy Romulus’ Insta Stories 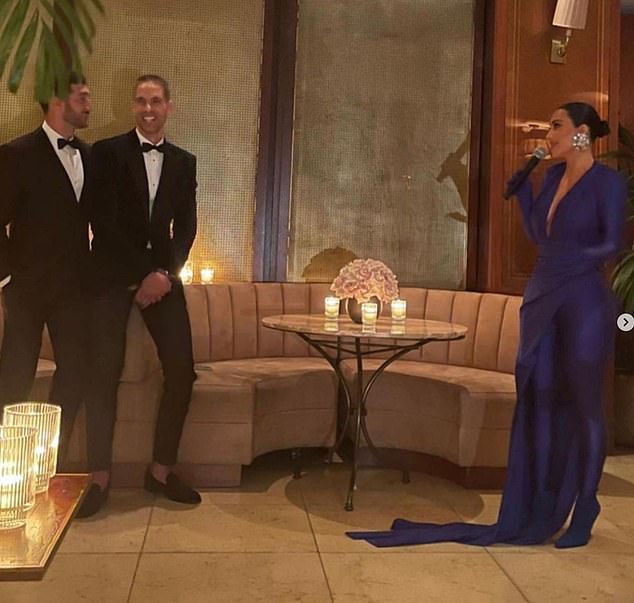 Guests were also treated to an intimate performance by Teigan’s husband John Legend, who serenaded the newlyweds with his romantic hit All Of Me.

Their new union was given the vote of confidence by Simon’s BFF Kim, who said: ‘When Simon asked me to talk, I was a little bit confused because I haven’t really figured out this marriage thing myself, so I don’t know what kind of advice he thinks I’m going to give to you guys tonight.’

She continued: ‘I will say, I have learned a lot, and I have some tips for you guys — like aesthetically — of what I think is super important.

‘Like little details, like when you guys are getting married and the guy is officiating you. Right when you’re done and you guys are gonna kiss, the guy is always in the back of the picture. Or there’s a microphone right there,’ she said, adding that the awkward figure ‘ruins all the pictures.’

‘And sometimes that’s all you’ve got,’ she added knowingly.

But Kim just focused on superficial details because she know her pals were a strong match for each other.

‘I have known you, Simon, for 15 plus years,’ she added. ‘Phil, I’ve known you for a long time, and I know that this is going to work. I know real love when I see it.’