Angel Olsen isn’t afraid to look inwards and tell you what she sees.

"I think that I’m eternally sad and I always over-intellectualise or overthink things," says the American singer-songwriter. "My mother always says that I was too smart for my own good, therefore I could never really enjoy the successes coming to me. I’m never happy with myself, and I also have a lot of expectations for people." 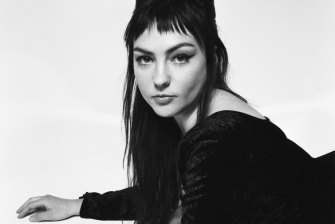 Olsen's 2012 debut Half Way Home was first in a trio of albums that mixed indie-folk with shadows of timeless country ballads. The last of those albums, 2016’s My Woman, elevated Olsen’s career both critically and commercially as she added a lush edge to her evocative lyrics. But the lengthy touring that followed its release, with Olsen fronting a band that carried her name, changed her approach.

I’m looking forward to playing this record because I can explore sadness again.

"I needed to take a break from my band, although I’m still working with a lot of them. I had invited everyone in, so I needed to make myself mine again," the 32-year-old says. "I loved that they were a part of it, but I felt responsible for making them happy. I wanted to be in a band. I still love the band, but I wanted to make something that was mine again."

The result is All Mirrors, a magnificent edifice of a record that has dual lives. Olsen first recorded a stripped-down solo version of the album’s songs, which recalled her earliest recordings, that is currently stored away for future release. She then cut the released version, which uses a full band and 12-piece string section to construct dramatic peaks, vertiginous ballads, and dizzying transitions.

While Olsen’s emotion-laden vibrato remains potent, the album’s strings are not lush and comforting. They have a fractious, dynamic edge that Olsen attributes to studio collaborators that included producer John Congleton and arranger and conductor Jherek Bischoff.

"They’re all avant-garde thinkers," Olsen says. "They didn’t want it to be easy strings. I argued with them on some of it because sometimes I just wanted padding – but a song like Impasse where only my voice carries the melody is not one I would sing walking down the street. It’s a theatrical moment. The dissonance is a mood in the record and I just went for it."

While All Mirrors is the most experimental record Olsen has made, it remains identifiably her. The lyrics, with their focus on identity and misunderstood perception, further themes that have recurred in Olsen’s writing.

Having just returned to the rehearsal room to figure out how the songs will be translated live, Olsen is excited by the idea of consecutive world tours – firstly playing the band version of All Mirrors, then the solo version after its release.

"I’m looking forward to playing this record because I can explore sadness again," Olsen says. "Sadness is always relevant to people: it’s what they’re feeling, or what they’re hiding. It always cuts deep."

Angel Olsen’s All Mirrors is out now on Jagjaguwar/Inertia Music.