THE next school term is only around the corner and is predicted to cause Covid cases to soar.

At the same time, more kids’ viruses are in circulation as the UK has moved out of restrictions ahead of the colder months. 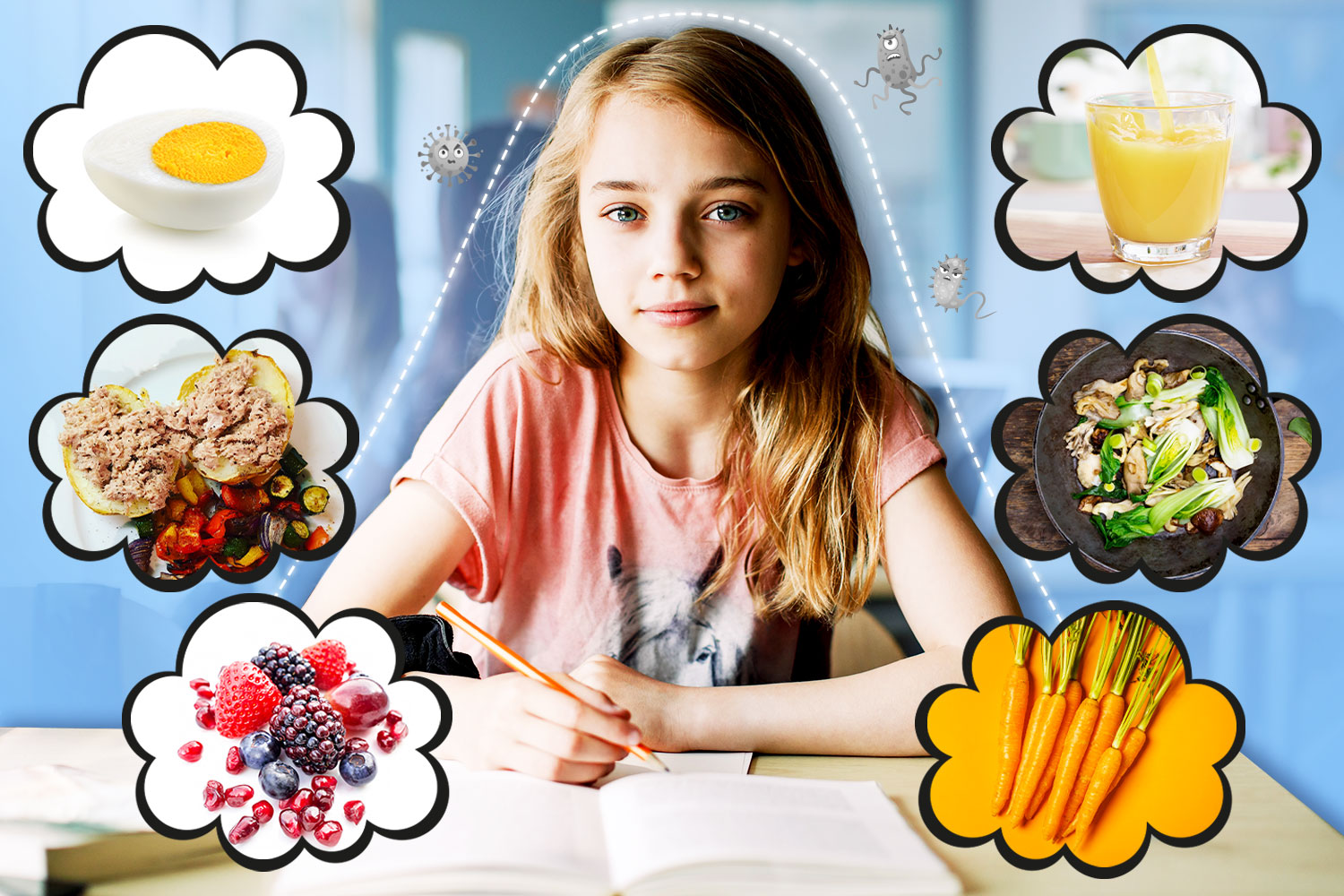 Experts have warned that it is “highly likely” there will be large levels of coronavirus infection in schools by the end of September.

And with no current plan to vaccinate kids under 16, your child may still be vulnerable.

Cases of RSV (a common cold) and norovirus are also higher than this time of year, due to more mixing since restrictions lifted.

So there’s a high chance your little one will come home one day with a sickness bug, infection or the sniffles of some kind.

“While adults get one or two colds per year, children get as many as six to eight. And children’s symptoms usually continue for at least 10 days. Cold viruses are also involved in 40 per cent of asthma episodes in school children.

“When they are in the peak of health they can fight off infections with few, if any, symptoms, but when they are under par they may develop one cold after another."

You can help keep their immune system strong to fight the bugs, and therefore severe disease.

1. Keep the hygiene routine up

It’s likely your child will have gotten into the habit of excessive hand cleaning during the pandemic – and it’s best to keep this up.

Phil Day’s, Pharmacy2U’s Superintendent Pharmacist, said: “Make sure your kids follow a good hygiene routine to keep infections at bay: washing hands after using the loo and before meals, and catching sneezes in a tissue.”

Dr Lesley Larkin, surveillance lead for the Gastrointestinal Pathogens Unit at Public Health England, told the PA news agency: “Remember, unlike for Covid-19 alcohol gels do not kill off norovirus so soap and water is best.”

Changing your own lifestyle habits can also help.

One of the main ones is to stop smoking, because second-hand smoke can impact your child’s health.

If the adults stop smoking, then everyone in the household gets healthier

It makes them more susceptible to breathing problems like asthma or allergies, and puts them at risk of health problems later in life seen in smokers, like lung cancer and heart disease.

Phil said: “If there is a smoker in the family, keep your kids out of the way of the smoke – ideally, if the adults stop smoking, then everyone in the household gets healthier.”

Kids have bounds of energy and so shouldn’t be opposed to some exercise in the evenings.

“Being active at any age supports the immune system,” Phil said.

“The NHS recommends that kids get at least an hour of exercise a day. It could be something a simple as a walk or a bike ride; or look for local clubs, for something more regular.”

It’s not clear why exercise has so often been shown to improve immunity, but some theories include that a spike in temperature kills off bacteria, induces white blood cells, and flushes out bacteria from the airways.

No matter how much resistance you get from you kids, try and keep to a good sleep routine.

Phil said: “The importance of a good night’s sleep can’t be underestimated at any age, and poor sleep affects the immune system.

“Have a predictable evening routine; minimise ‘screen time’ in the hour before bedtime; and make sure the bedroom is quiet and dark.” 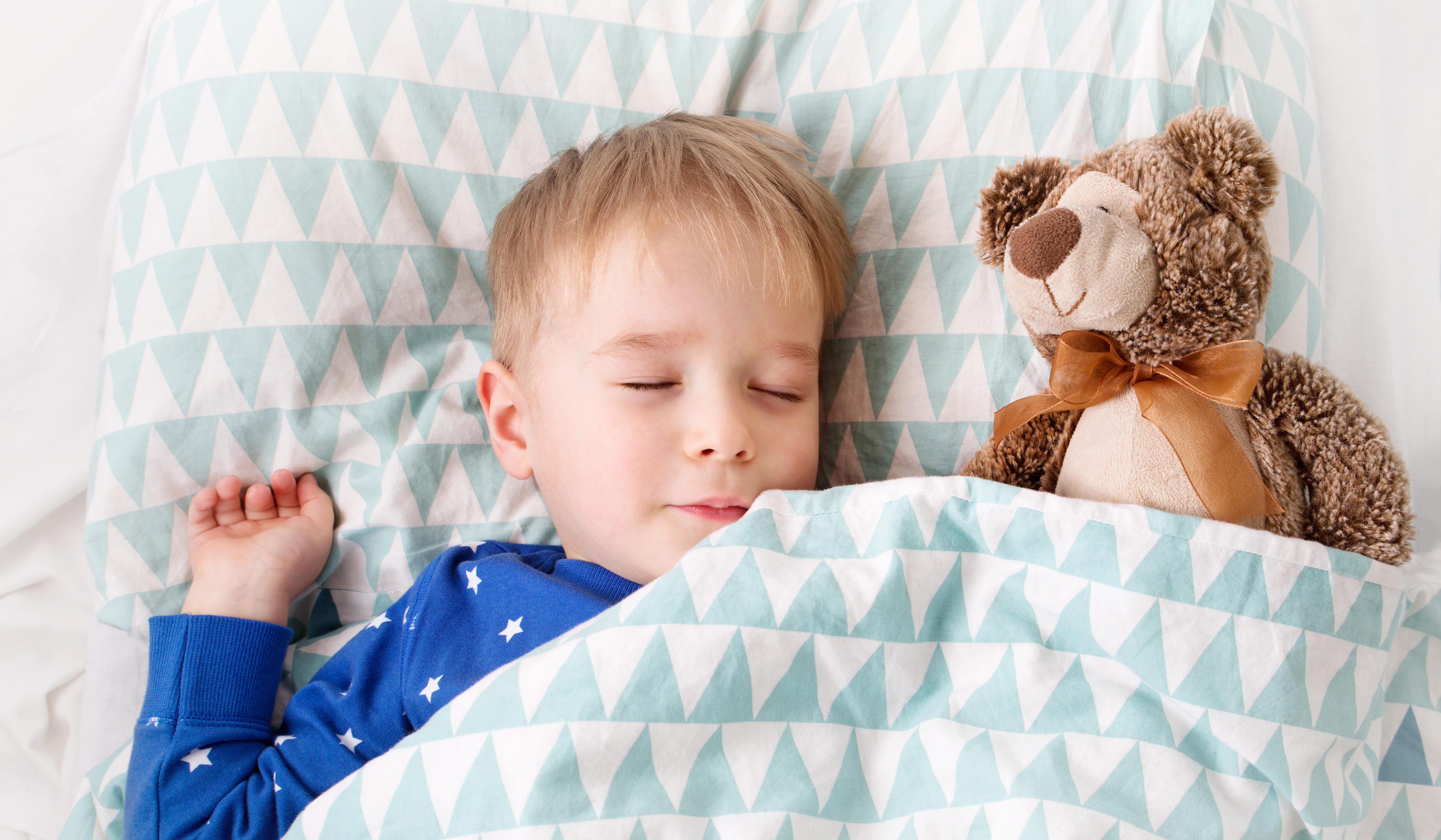 5. Walk to school, if possible

Covid and other viruses are still a threat, most often in indoor and crowded spaces with poor ventilation.

Get as much fresh air as you can, says Dr Ross Walton, immunologist, clinical researcher and founder of A-IR.com.

He said: “Parents driving their children to school create their own personal transport ‘bubble’ reducing virus exposure, but for many this is not an option alongside presenting a substantial environmental burden.

“The healthiest way to return to school would ideally be to walk in the open air, or cycle if your child is safe to do so."

Nasal sprays can offer an extra layer of protection in the nasal passage, where virus particles often first enter the body.

Each spritz provides a coating that lasts for a few hours. It envelopes the bacteria and inactivates it, or so the companies behind them claim.

The idea is that they can be carried in the pocket and used when going onto a busy train, into the office or carried by your child at school.

Dr Sarah, medical director of Healthspan, said: “Cold & Flu Guard contains natural plant-derived flavonoids shown in studies from Utah State University to kill 99.99 per cent of SARS-CoV-2 (the virus that causes Covid-19) within one minute and flu and colds viruses within five minutes.”

Be wary that many firms have been told off for advertising its nasal sprays “kill Covid” due to a lack of evidence.

Some people swear by echinacea as their traditional way of beating the bugs.

It’s considered a herbal remedy, but numerous studies – albeit it they are small and not entirely robust – have proven the plant could help combat infections when you get them, preventing serious illness.

For example, one study of A. Vogel’s Echinaforce Chewables were shown to reduce cold and flu events by 32 per cent compared to vitamin C supplements in a study of 200 kids.

Usually this is combined into one pill per day. Talk to a pharmacist about which ones to use, because combining some could mean your child is getting too much of some vitamins, which would be harmful.

Pharmacist Phil said: “Vitamin supplements are a good way to top up the diet and there are many that are formulated especially for kids. Look for one containing vitamin C that’s also sugar-free.”

Dr Brewer said: “Take vitamin D supplements according to NHS advice, and consider a probiotic supplement which can reduce the severity and duration of a cold by stimulating activity of the T-lymphocyte cells which regulate immune responses.”

Our immune system is largely built on the foods we put in the body, which explains why it's so essential to eat plenty of fruit and vegetables.

Phil said: “Fruit and vegetables are full of essential vitamins and nutrients which will benefit the immune system significantly.

“With kids, this can sometimes be met with resistance at mealtimes, so try something different."

"Take your kids shopping and let them pick the fruit and veg they prefer; make the benefits clear (strong bones, resistance to infections, healthy hair); or try preparing the food differently – maybe a fruit smoothie, or sweet potato fries, for example.

“And minimise the amount of refined sugar they eat.”

Your “beat the bugs” meal plan for kids

Rob Hobson, Healthspan Registered Nutritionist, explains why it’s so important to incorporate vitamin and mineral-dense foods into your children’s meals.

“Diet is a simple way to support our immunity  as well as all the other things  we have learnt since this  pandemic,” he said.

“Helping children back to school and staying well without the vaccine can simply mean  making a few simple tweaks to the diet.

“Think like a rainbow when it comes to diet whether that’s fruit, vegetables, tinned, canned, frozen, chopped, diced, hidden in salad they can all be used and as much colour as you can pack into a lunchbox.”

Back to school meal plan

Breakfast: Eggs with a glass of fruit juice, live yoghurt with berries and seeds, porridge

Why are these foods recommended? Read on to find out what vitamins they contain.

“There’s good evidence from scientific research to show that vitamin D plays a key role in immunity by reducing the risk of coughs and colds,” Rob said.

“Finding foods that are rich in vitamin D that children will enjoy especially if fish isn’t a favourite isn’t easy as many food groups simply don’t offer it in a good supply.

“You can’t get everything you need from food alone as very few foods contain vitamin D and the main source is oily fish, although a little can be found naturally in eggs and mushrooms (grown under UV light).

“You can also find vitamin D in fortified foods such as breakfast cereals and margarine spreads.”

How to eat: Oily fish such as salmon, sardines, herring and mackerel; red meat; egg yolks; fortified foods like some breakfast cereals and fat spreads.

“Research has shown that children who regularly took probiotics (beneficial bacteria) had 19 per cent fewer infectious diseases over three months compared with those that didn’t,” Rob said.

How to eat: Live yoghurt with berries or granola as snack or breakfast. 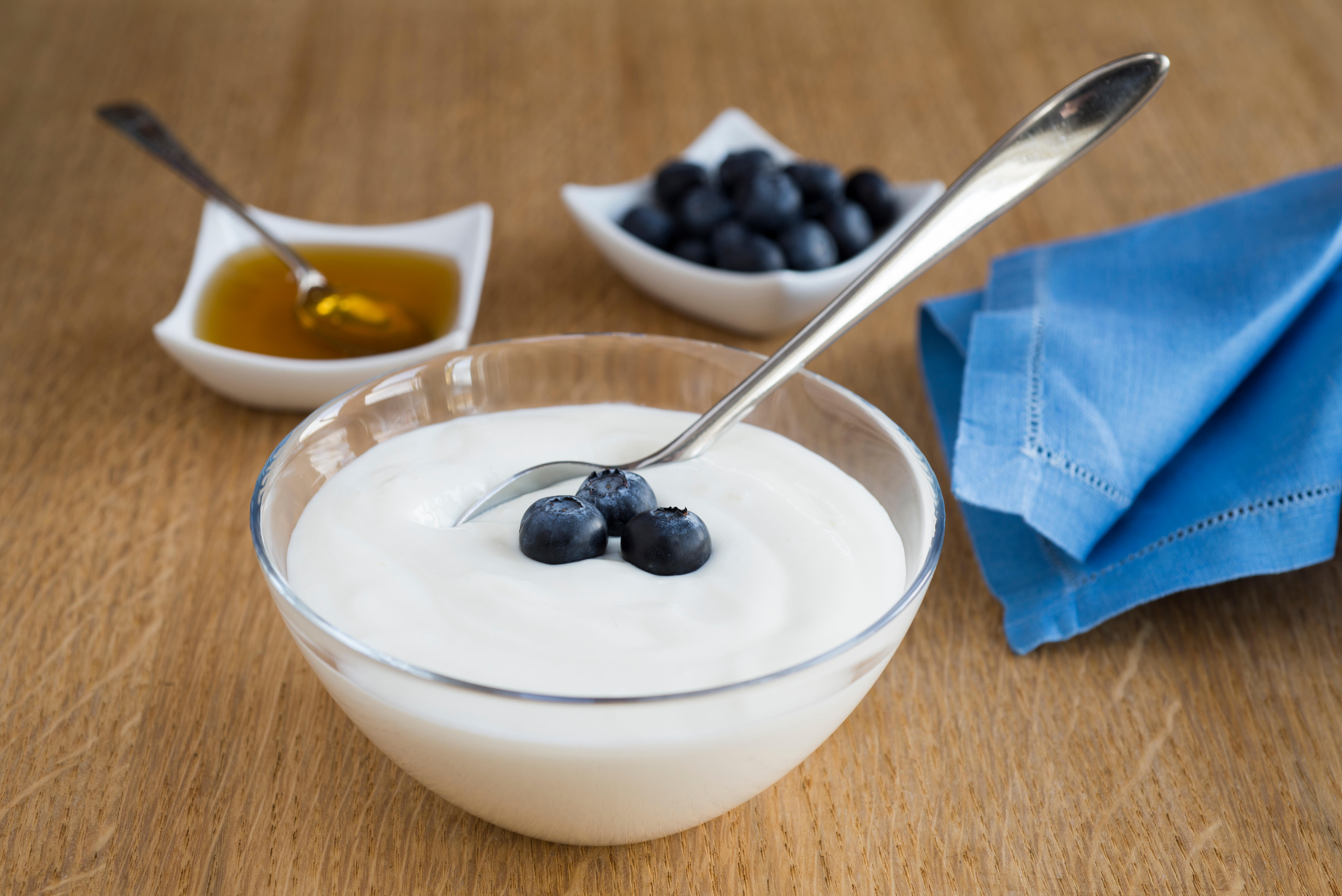 “The main role of iron is to help make healthy red blood cells that carry oxygen around the body. This mineral is also involved in the turnover of immune cells, especially lymphocytes that are associated with the generation of a specific response to infection,” Rob said.

“Very low levels of iron can lead to anaemia, which has been shown to impact on your immune system and increases your vulnerability to infection.”

“This vitamin does contribute to the normal functioning of your immune system but whether it helps to prevent colds is yet to be proven.

“Taking at least 200 mg of vitamin C per day did appear to reduce the duration of cold symptoms by an average of eight per cent in adults and 14 per cent in children, which translated to about one less day of illness.”

How to eat: Glass of fruit juice at breakfast; berries or kiwi; broccoli and red peppers eaten in stir frys or the latter as a snack with dip.

“It maintains the integrity of mucosal cells in the GI tract, eyes, nose and lungs acting as the first line of defence. Also involved in production of antibodies which fight infection.”

How to eat: Think orange – sweet potato mash; butternut squash crisps as a snack or in curries; carrot batons for snack; cantaloupe melon.

“There is a  massive gap in selenium intake, with 32 per cent of 11 to 18-year-olds not getting enough in their diet,” Rob said.

“It’s required for the synthesis of antibodies and also stimulates the production and activity of T lymphocytes and natural killer cells which help to fight viral and bacterial infections.”

How to eat: Boiled eggs as a snack or scrambled eggs; canned tuna in sandwiches or with jacket potato; chicken and turkey sandwiches; brazil nuts; tofu; switch to wholewheat pasta.

“The research is not that strong but this mineral still plays an essential role in maintaining the normal function of your immune system.

“Studies do show more convincingly that rather than preventing coughs and colds, zinc helps to alleviate the duration of illness.

“You can top up on your zinc intake by eating foods such as shellfish, wholegrains, oats, brown rice, dark green leafy vegetable, beans, nuts and seeds.”

How to eat: Seeds as a topping; oats in porridge, smoothies or bars; prawns; brown rice and bread instead of white.