The oil and gas industry says the federal government is risking jobs and the economy by waging a levy on the industry to cover the estimated $250 million cost of decommissioning an offshore production vessel that fell into public ownership.

The federal government was forced to take ownership of the Northern Endeavour production vessel, permanently moored 550 kilometres offshore from Darwin in the Timor Sea. 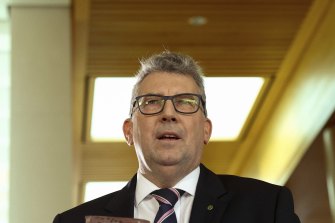 Resources Minister Keith Pitt will impose a levy on the oil and gas industry to recover the cost of decommissioning an offshore oil and gas rig. Credit:Dominic Lorrimer

The vessel’s owner, Northern Oil and Gas Australia, a subsidiary of Woodside Petroleum, was barred from production in 2019 by safety regulators and entered liquidation.

Decommissioning the Northern Endeavour has been estimated to cost $250 million and Resources Minister Keith Pitt said in December last year taxpayers should not foot the bill.

The federal budget revealed on Tuesday night the government would impose a levy on industry to pay for decommissioning and removal of the vessel. The terms and cost of the levy will be set after negotiation between the government and industry.

Australian Petroleum Production and Exploration Association (APPEA) said the levy could apply across the industry and damage the economy.

“Tonight’s announcement of a new levy on the entire [offshore] oil and gas industry is a terrible precedent and could have serious repercussions to Australia’s economy and to jobs,” said APPEA chief executive Andrew McConville.

Mr McConville said there were alternatives to a levy including making the government’s current management of the Northern Endeavour more efficient, reducing the cost of decommissioning through working with industry and looking at alternative funding such as selling the asset.

“We have consistently maintained to government the importance of considering other cost recovery measures like selling the asset, working constructively with creditors, making available PRRT credits, seeking in-kind contributions from industry and fully exploring a commercial solution,” he said.

South Australian senator Rex Patrick in October criticised the government’s handling of the Northern Endeavour, arguing it was a “totally avoidable situation”.

“It’s like NOPSEMA (the safety regulator) saw someone struggling in the deep end of the pool and instead of offering assistance, they held their heads under the water, and now the taxpayer is paying to recover the body, do the autopsy and sort out the funeral.”

The government announced a new decommissioning framework in April which provides greater protections to the Commonwealth and taxpayers, including new liability provisions to enable government to call back former titleholders, increased oversight of changes in company control and greater financial assurances.