A group of schoolchildren are gathered in a veggie garden at a Melbourne primary school, their small fingers busy at work planting vegetable seedlings in damp soil. They’re cracking jokes about how no-one chose to plant the brussels sprouts.

Dressed obligingly in school uniforms on a Sunday, these students are here to show off their school’s sustainability program and help the government launch Victoria’s new carbon emissions reduction targets. 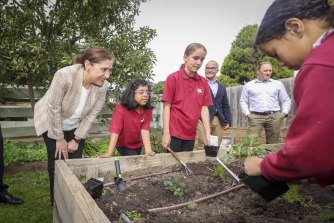 It’s a poignant scene because by 2030 – when they’re old enough to vote – it will be clear if we have cut greenhouse pollution enough to avert truly catastrophic climate change.

Will the type of emissions cuts announced on Sunday be sufficient to keep global warming under two degrees? And what type of world will these young gardeners face?

Victoria’s new carbon targets will reduce emissions by 28 to 33 per cent of 2005 levels by 2025, and 45 to 50 per cent by 2030. They’re not as ambitious as they might have been; in 2019 the Victorian government commissioned an independent panel to come up with a suggested range and it proposed making cuts as high as 60 per cent by 2030. But they are achievable.

EnergyAustralia’s coal-fired power station Yallourn is now due to close four years ahead of schedule in 2028, which will knock out about 13 per cent of the state’s emissions. It’s not an exact science, and Loy Yang A and B could increase their output and emissions but the closure of Yallourn will have a significant effect. 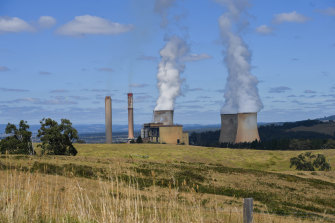 Closing Yallourn power station in the Latrobe Valley by 2028 should help Victoria hit its targetCredit:Joe Armao

And renewables in Victoria are booming: the share of renewable energy powering the state’s homes and business has grown from 9 per cent in 2010 to more than 26 per cent last year.

More renewable projects are on their way, with Environment Minister Lily D’Ambrosio’s office halfway through a tender process to secure companies to build 600 megawatts of renewable energy.

Transport is Victoria’s second biggest polluting sector behind energy. The government is proposing to pay 20,000 new car owners a $3000 government subsidy if they buy a zero emissions vehicle.

From an emissions sense this isn’t the main game – that’s getting more people to ditch cars and use public transport. But it will mollify car owners upset by Treasurer Tim Pallas’ proposed electric vehicle tax and send an important signal about the decarbonisation of transport.

But while Victoria’s new climate targets are achievable and a strong move in the right direction, are they enough?

In a recent report, the Climate Council said the majority of emissions cuts needed to occur within the next decade to avoid irreversible environmental tipping points.

Australia would need to in effect triple its emissions reduction target to 75 per cent on 2005 levels by 2030, and achieve net-zero emissions by 2035, the council said (although there was some dissent among climate scientists about whether warming could be limited to 1.5 degrees).

Given the lack of ambition from Canberra, Victoria and the other states and territories have been left to do the heavy lifting on emissions cuts. Let’s hope it’s enough.