DIASPORA ★★★★★
By Robin Fox and others,
Chamber Made Opera, The Substation, Until October 6

The latest work from Chamber Made is an experimental opera inspired by Greg Egan’s utopian sci-fi novel Diaspora. Composed with lasers, 3D projection and live electronica, it imagines a world where artificial consciousness is born through computers – allowing human-like beings freed from biological embodiment.

You don’t have to know any of that to appreciate this strange and captivating odyssey, and going in blind, the prologue suggests ancient resonance rather than a post-human future. As coherent sheets of light ripple through the auditorium – purple, undulating – Homer’s “wine-dark sea” leaps to mind.

A seismic electronic throb, almost at infrasound, causes the seating banks to vibrate, and from the waves a rotating 3-D projection appears, which looks at first like bleached coral, but gradually evolves into a human brain. 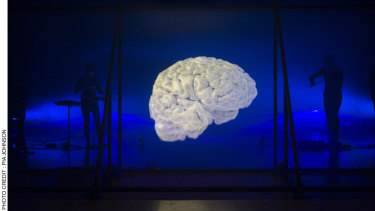 Chamber Made’s Diaspora features what initially looks like bleached coral but evolves into a human brain.

It’s easy to sit there mesmerised as it spins and expands, the eerie electronic soundscape swelling with cosmic slowness and grandeur. I thought for a moment of the Orb’s memorably titled ambient house track, A Huge Ever Growing Pulsating Brain That Rules From the Centre of the Ultraworld.

But the familiar must dissolve into a scribble of chaos before a new page of consciousness can be written; biology denatured and reborn through code.

The musical analogue of that idea arrives in the alienations of Erkki Veltheim’s live violin, or Georgina Darvidis’ vocals, distorted into otherworldly sound by electronic filters.

And the emergence of AI is handled brilliantly. You know you’re not in Kansas anymore when you hear the most bizarre rendition of Somewhere Over the Rainbow ever performed. (Barely audibly with pops and garbled syllables, as if sung underwater, while a triskelion of arms and disarticulated human body parts floats midair.) 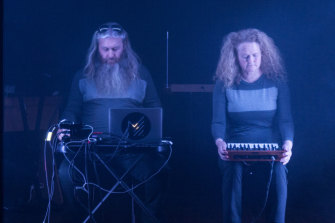 Diaspora is an exhilarating visually and sonically immersive sci-fi experience.

References to The Wizard of Oz accumulate throughout the process of creation. Digital projections and the human body intertwine; new life assembles itself in black and white, before the radiance of the Emerald City spills forth in a thrilling laser display, which then subsides into a miniature tornado, the vortex a conduit between worlds.

Robin Fox has crafted an exhilarating visually and sonically immersive sci-fi experience – a fathomlessly strange encounter with the future as essentially “other”, but also intimately of the moment. More people should get a chance to see it.