Spoof ‘Meghan Markle for President 2020’ website appears using her real quotes promising to bring ‘equality, empowerment, and kindness’ in the ‘confrontational world we live in’

A spoof ‘Meghan for President’ website has been set up claiming that the royal is going to be competing against Donald Trump and Joe Biden in a bid to become the next US President.

The website, which is called meghanforpresident.com and features photographs of the Duchess of Sussex, 38, at several engagements, appeared just weeks before US voters are due to vote in the presidential election.

A post, which is thought to have been written by fans of the royal and has been falsely credited to the Duchess of Sussex, claims Meghan opted to run for President ‘after months of reflection and internal discussions.’

It reads: ‘After many months of reflection and internal discussions, I have heard your calls to become President of the United States of America. 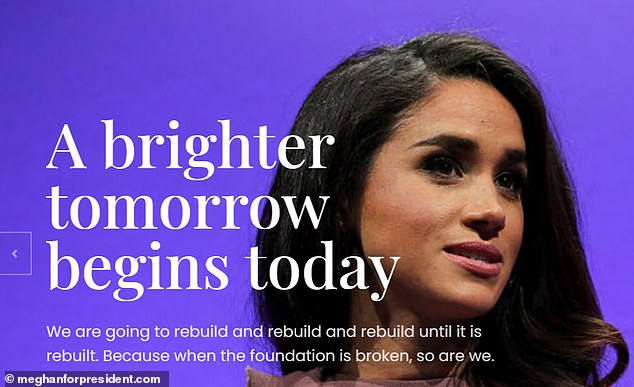 A spoof ‘Meghan for President’ has been set up claiming that the royal, 38, is going to be competing against Donald Trump and Joe Biden in a bid to become the next US President (pictured)

The fake website boasts a number of inspirational quotes – including ‘together, we will lead’ (pictured)

‘It is with your encouragement, particularly over the last few months, that I feel prepared to make this decision.’

‘With your support I believe we can bring equality, empowerment, and kindness to this dangerous, aggressive and confrontational world we live in.’

Elsewhere, the website features a ‘contribute’ tab which encourages users to get involved in the campaign – but the link doesn’t actually lead anywhere. 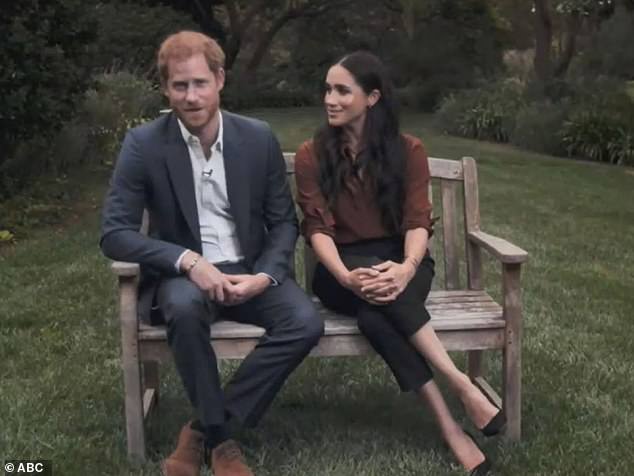 Prince Harry and Meghan Markle spoke out about the upcoming U.S. election in an interview with Times 100 (pictured)

Another reads: ‘A brighter tomorrow begins today. We are going to rebuild, rebuild and rebuild until it is rebuilt. Because when the foundation is broken, so are we.’

It also includes direct quotes that Meghan has previously used – including comments from a 2015 interview with InStyle where she said: ‘I’ve also learned that saying ‘no’ is just as valuable as saying ‘yes.’ It’s something that, I think, comes with age and really having a sense of your self-worth.’

However. many were quick to take to social media to say that the Duchess of Sussex shouldn’t run for President while she she maintains her royal title, while others were excited by the mere prospect.

‘I can’t see the US wanting a president that has a British Royal title,’ wrote one, while a second commented: ‘This should be enough to get the titles dropped.’

The spoof website comes after Prince Harry and Meghan called on American voters to ‘reject hate speech, misinformation and online negativity’ in ‘the most important election of our life.’

Their comments, which came in a Time 100 video to go with the publication of this year’s list of the most influential people, have been widely interpreted to be a swipe at U.S. president Donald Trump. The list does not include the royal couple.

Members of the royal family are supposed to be politically neutral, and under the Sandringham accord – agreed in March when the pair quit their royal duties – the Sussexes vowed that ‘everything they do will uphold the values of Her Majesty’.