Katie Hanson lives and breathes French Impressionism. But still, in the presence of the masterpieces, her curatorial brain goes quiet and her emotions surge.

“I find myself taking this big inhalation of breath that I just release and relax,” says the curator of European paintings at Boston’s celebrated Museum of Fine Arts. 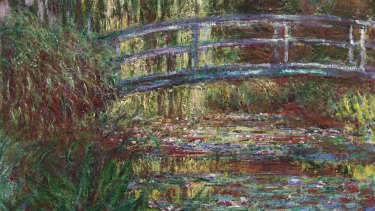 “To have that immersive experience of being surrounded by beautiful colour, by the presence and the painterly touch of Impressionist paintings… it’s a sensual pleasure being with them, you sense the individual, the maker, the mark, the person who touched that with the brush, they’re there with you.”

That immersion in beauty is coming to Melbourne this winter. The cream of MFA Boston’s collection – more than 100 French Impressionism masterworks including 19 Monets and works from Renoir, van Gogh, Cezanne, Pisarro and Degas – will be on show from June to October at the NGV’s Winter Masterpieces exhibition.

The show will culminate in a room of 16 Monet canvases, enveloping visitors in meadows, gardens and that famous pond of water lilies in Giverny, bathed in colour and light. 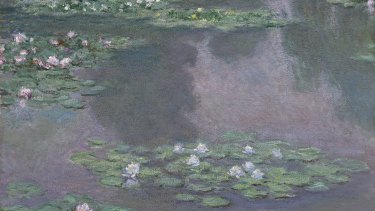 And in a deliberate counterpoint, from April to August NGV Australia will highlight Australian Impressionism, in a show dubbed She-Oak and Sunlight after the groundbreaking Tom Roberts painting. There, more than 270 works by artists such as McCubbin, Streeton and Conder will explore the relationships and international influences behind Australia’s most recognisable and important art movement.

Highlights include McCubbin’s The Pioneer and Roberts’ Shearing the Rams and A Break Away! – and a portrait of a young girl by Iso Rae, a largely forgotten artist who was influential and admired at the time.

Angela Hesson, curator of Australian painting at NGV, says Ray studied alongside McCubbin and after she moved to France won international acclaim, exhibiting regularly at the Paris Salon. 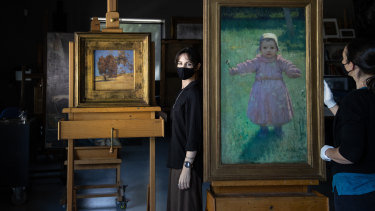 Young Girl by Iso Rae and She Oak and Sunlight by Tom Roberts, on the move with Dr. Angela Hesson curator of Australian art and Raye Collins conservator at the NGV.Credit:Simon Schluter

Her style is French, but perhaps her Australian heritage shows in her interest in the play of intense light and shadow, says Hesson.

“In terms of her technique and her palette and her subject matter it’s a really revolutionary, extraordinary work… sadly in the 20th century she has become less well-known but she was important at the time.”

Impressionism was an international movement, and having the two exhibitions open at the same time in the same city will give new insight into how it weaved together across the globe, says Hesson.

“You will have a real sense of the richness and the diversity of the movement,” she says. “These are names that everyone’s heard of, a movement that’s probably the most loved in art history and there are a huge number of exhibitions around Impressionism. But I think in putting the two shows together there’s the capacity to see its complexity and some of its lesser known players who actually were very important at the time.” 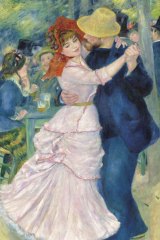 MFA Boston’s Hanson, too, is excited by the juxtaposition.

“I love the opportunity to see the familiar with fresh eyes,” she says. “To be able to walk a little way and make these comparisons, have those kinds of conversations… it really allows visitors to dig their teeth into it.”

She hopes visitors won’t just head straight for the famous works but take time to enjoy the lesser-known delights.

Her personal favourite – possibly her favourite painting in the world – is Manet’s Street Singer from 1862, a portrait of a woman in a grey dress walking out of a cafe, holding a guitar and cherries wrapped in yellow paper.

It encapsulates that modern experience of glimpsing a compelling stranger on the street, Hanson says.

“She’s an enigma, she’s carrying this weird combination of things, and I just want to know more and I’m never going to be able to. One of the genius things about Manet is he’s not going to give you the solution to the riddle, part of the pleasure is the enigma.” 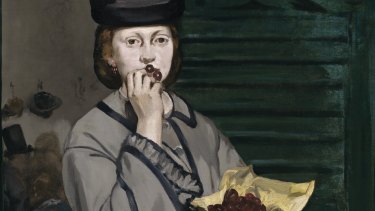 The mystery of the woman is highlighted by the fact her hand covers her mouth.

“I’ve always found her facial expression to be inscrutable, and now everyone’s face is covered by a mask when I pass them on the street, I more thoroughly appreciate how much the covered mouth is part of the inscrutability. This pandemic is really forcing me to think differently about that painting. It’s the first one I went to see after our first [pandemic] closure, and to be in that space with my own face covered was emotionally jarring.”