Shirley Young, a Chinese-American businesswoman who broke barriers in the corporate world before starting a second career as a cultural diplomat, using classical music to bridge the ever-widening divisions between China and the United States, died on Dec. 26. She was 85.

The cause was complications of breast cancer, said David Hsieh, one of her sons.

Ms. Young rose to prominence as an executive with Grey Advertising, where she began in 1959, standing out as one of the few women and one of the few Asian-Americans at the firm, which was then a power in its field. With a degree in economics from Wellesley, she challenged the conventional wisdom that the best marketing was driven by gut instincts.

Instead, she pushed her firm to invest in quantitative market research, a standard practice today but one that was pioneering in the 1960s.

“People think advertising is more powerful than it is,” she told The New York Times in 1974. “We know just how unpowerful it is, because we’ve failed many times.”

Ms. Young’s ideas were not the only revolutionary thing about her. At the time, most employers offered severance packages to pregnant women, on the assumption that once they gave birth, they would never return to work. When in 1963, expecting her first child, she insisted otherwise, Grey Advertising had to invent its first maternity policy.

The firm clearly thought she was worth it. In 1983, a time when a global recession was forcing the advertising industry to slash research budgets, Grey went the other direction, creating an entire research subsidiary, Grey Strategic Marketing, with Ms. Young as president. She amassed a long list of Fortune 500 clients, including General Motors, which hired her away in 1988 to become its vice president for consumer market development.

Almost immediately, she pushed her new employer to invest in China, and later moved to Shanghai to help oversee development of a billion-dollar joint venture with SAIC Motor, a Chinese company, to build Buicks.

To Ms. Young, many American companies failed to appreciate the size of the cultural differences between the two countries and, at the same time, the possibility of bridging them. She encouraged G.M. to broaden its executives’ exposure to Chinese language and society through education and cultural exchanges, the sort of focus she would later emphasize in her work in the arts.

Indeed, even as she continued to lead G.M.’s expansion in Asia, she became increasingly involved in cultural and nonprofit endeavors. In the wake of the Tiananmen Square massacre, in 1989, Ms. Young joined other prominent Chinese-Americans, including Yo-Yo Ma and I.M. Pei, to create the Committee of 100, a group dedicated to shaping trans-Pacific dialogue. She served as its first chairman, a position she also held at a spinoff organization, the U.S.-China Cultural Institute.

Ms. Young left G.M. in 1999 and opened her own consulting firm. But her real passion was music and the cultural diplomacy it made possible. Over the next two decades she became an important force behind the expansion of Western classical music in China and a patron of Chinese classical musicians trying to make it in the United States, offering them advice, introductions and even personal grants. 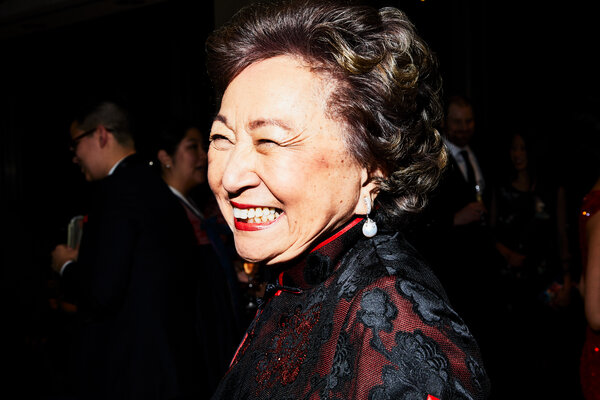 As a board member at institutions like the Detroit Symphony Orchestra, the Shanghai Symphony Orchestra and the New York Philharmonic, she created exchange programs and arranged tours and concerts. After some performances, she hosted parties at her Manhattan apartment, where political dignitaries mixed with up-and-coming cellists and singers.

“As a Chinese musician, when you arrive in New York, you know Shirley Young right away,” said Wu Han, a Taiwanese-American pianist. “She was a quiet giant on the cultural scene.”

Shirley Young was born on May 25, 1935, in Shanghai, the daughter of Clarence Young, a Chinese diplomat, and Juliana (Yen) Young, a society figure who later worked at the United Nations as a protocol expert.

Mr. Young’s work took the family around the world. Shirley’s sister Genevieve was born while he was stationed in Geneva; Frances, her other sister, was born in Paris.

On the eve of World War II, Mr. Young was made the Chinese consul general in the Philippines, at the time an American territory. The Japanese invaded the islands in late 1941; when American forces retreated a few months later, Mr. Young refused an offer to go with them.

Instead, he was arrested along with other diplomats by Japanese forces soon after they had occupied Manila, and his family was forced to share their three-room bungalow with about 40 diplomatic family members. Ms. Young later learned that the Japanese had executed her father.

In 1945, after the war, the Youngs sailed to San Francisco on a troop ship but soon moved to New York, where Ms. Young’s mother knew more people. Her mother was hired at the U.N., and in 1959 married Wellington Koo, a Chinese diplomat. She died in 2017 at the age of 111.

Ms. Young married George Hsieh, a computer consultant, in 1956. They had three sons — David, William and Douglas — and later divorced. A later marriage to Norman Krandall, a business executive, also ended in divorce. Along with her sons, she is survived by seven grandchildren.

Ms. Young had hoped to follow her father into diplomacy, but by the time she graduated from Wellesley, in 1955, she had no country to represent: The Chinese Revolution was over and the Communists were in power, and she was not yet an American citizen.

Nor, despite graduating Phi Beta Kappa in economics, did she seem to have bright prospects in business. “Everybody said: ‘Oh, you have a great record, wonderful. You should join our typing pool,” she recalled in a 2003 interview with the journalist Bill Moyers.

It took Ms. Young four years to land the job at Grey Advertising, but once there she rose quickly. Within a few years she was being recognized as an industry leader in market research, which made her an appealing candidate for corporate boards.

Her presence could make some fellow board members uncomfortable, especially at retreats, where business was often conducted alongside hunting trips and cigar parties — events to which she had not been invited. She showed up anyway, trudging alongside the men through fields and spending hours in smoke-filled parlors.

Ms. Young brought her business connections and strategic savvy to her career in the arts, especially in her role as international adviser at the Chamber Music Society, beginning in 2015.

The society was struggling to appeal to Chinese audiences, which seemed to prefer big symphonies and star soloists to its more intimate performances. Ms. Young arranged a barnstorming tour around China, complete with a news conference to introduce the musicians to the news media and educational events to introduce them to prospective fans. It was a success: Until the Covid-19 pandemic, the society’s players were going to China many times a year.

“We’d have huge lines of young people who came to see a concert,” said Suzanne Davidson, the society’s executive director. “They’d stick around to buy CDs and meet the musicians. It was a huge success that is really a result of Shirley.”

Though Ms. Young was a lifelong lover of music — she had once considered a career as a concert pianist — it was, in a way, a means to an end for her, a chance to deepen connections across widely divergent cultures, a perspective that kept her optimistic even during the recent period of tensions between China and the United States.

“I think when we look at politics and all the conflicts today, in my view in 20 years I don’t think we’ll remember them,” she said in an interview in March. “These connections people make on a human basis, I think that will last. So I’m interested in putting my time there.”