SARAH VINE: This 24-hour cacophony of doom will do nothing but drive us crazy

Do you remember when all those old wartime slogans suddenly started appearing on tea towels and mugs?

‘Keep calm and carry on’, ‘Loose talk costs lives’ and – my own personal favourite – ‘To dress extravagantly in wartime is worse than bad form, it is unpatriotic’.

They seemed so quaint, a nostalgic reminder of long-vanished times. It amused us, in our clever, modern, cynical way, to think of people dutifully obeying their entreatments.

We would never be so gullible as to be taken in by such things – and besides, a world so paranoid and fearful, where government should seek to control such aspects of life as the clothes on our back and the words in our mouths, was inconceivable. Wasn’t it? 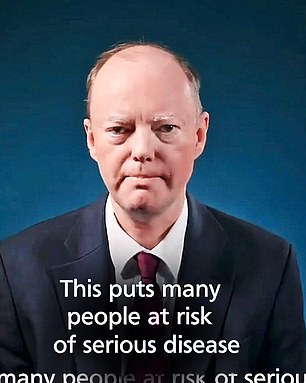 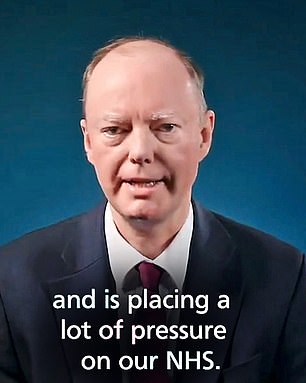 Frightening the population into submission is not the way to get this country back on its feet again. It’s a way of sending everyone around the bend, of heightening existing divisions, of turning neighbour against neighbour, friend against friend

Cue hollow laughter. Such gentle wartime admonishments seem positively quaint compared with the relentless propaganda now raining down upon us.

And this time it’s not just a few words on the side of an omnibus, or a poster hastily pasted to an awning: it’s a full-on television and internet campaign.

It’s a non-stop assault on our senses, a constant, 24-hour cacophony of doom. Day and night, online and in print, on television and radio, the message is simple and inescapable: do as you’re told, or we’re all going to die.

The latest weapon of mass depression was deployed on Friday in the shape of Chris Whitty, recast as a modern-day Lord Kitchener, pointing the finger at anyone not yet cowering in terror behind the boxes of loo roll in the corner of a reinforced steel basement. 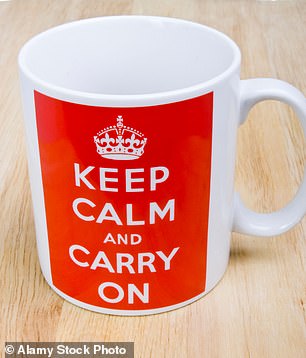 Do you remember when all those old wartime slogans suddenly started appearing on tea towels and mugs? ‘Keep calm and carry on’, ‘Loose talk costs lives’ and – my own personal favourite – ‘To dress extravagantly in wartime is worse than bad form, it is unpatriotic’

Slowly and solemnly, and with the air of a prison chaplain addressing a congregation of especially recalcitrant young offenders, he lectured us about the gravity of the situation, reminding us in no uncertain terms that the very fact of our existence remains the greatest of threats to the NHS.

By way of reinforcement, the Government released two terrifying new posters showing a dying patient – yes, actually dying – and a healthcare worker wearing full PPE, with the warning: ‘If you go out, you can spread it. People will die.’

Meanwhile, Sage proclaimed an urgent need for even tighter restrictions. Tighter how, exactly? What do they want us to do – actually stop breathing? Maybe that wouldn’t be such a bad idea. After all, it’s becoming increasingly apparent we humans are the real problem here, not the virus itself.

Don’t get me wrong. I am no ‘covidiot’ (hated word), no denier of either the existence or the severity of this disease. I understand the problems the NHS faces, and the huge responsibility that rests on the shoulders of Ministers (possibly more than most, since I live under the same roof as one), as they battle to get this thing under control.

I sympathise with the impossible choices they are having to make, made all the more difficult by a Labour Party that has, at every turn, behaved with a level of venality shocking even by their current low standards.

I understand that the Government can’t do this without the collaboration of the general public, as I think do most sensible people.

And I accept the need for restrictions, even though I think a lot of them don’t always make sense and I fear for the long-term consequences of it all.

What I don’t get is the need to scare us witless. This Project Fear the Government seems to have embarked on as a way of ramping up the public’s response to the rising R-rate does not strike me as either wise or particularly effective. There is only so much bad news people can take before they become desensitised to it, and I fear a lot of people are at that stage.

In fact, I wouldn’t be surprised if the current level of fire-and-brimstone rhetoric doesn’t inadvertently result in people being less, not more, likely to fall in line. Things are not exactly helped by the over-the-top actions of certain police forces, which seem to have interpreted the current situation as an excuse to indulge in a spot of Stasi role-play.

Deploying seven officers to arrest two women on a walk in a park, for example. Or threatening to fine people for throwing snowballs. Or barging into people’s houses on the whim of a neighbour.

All these things make a population already on edge even edgier. Spreading panic and fear serves no useful purpose, and yet this is what the Government, the police and certain sectors of the media seem intent on doing.

It won’t have the desired effect. It will simply encourage the already hysterical, screeching harbingers of doom, the paranoid lockdown zealots, while alienating and very likely infuriating the vast majority of still (just about) sane people who are doing their best to keep their heads down and get through this nightmare in one piece.

If you fill people’s hearts with misery – and I’m sorry, Mr Whitty in full apocalyptic mode is the very essence of misery – they will lose all hope, and right now hope is the only thing getting most of us through our day.

Hope not just in the vaccine, but in the possibility of salvaging jobs and businesses, of making up for lost school time, of seeing loved ones, of being able to book a table at a restaurant without feeling like a criminal.

And besides, if I’m honest, I’m not sure how much more panicked I can be. I already wake up at 3am most mornings, my stomach liquid, Corona nightmares running through my head.

I already lie there, listening to the ringing in my ears and the foxes howling, worrying about my parents, my children, the economy, friends who have lost loved ones, colleagues who are struggling, the faces of weary doctors and nurses on the news, the closed signs in shop windows and so on, in an ever-decreasing spiral of despair.

I am sure I am not alone. There can’t be a single person in the country who doesn’t understand the severity of the situation. But just because things are serious does not mean we all have to be suicidal. Maintaining public morale at a time like this is vital – otherwise we are not going to have the mental strength to get through to the other side and begin the long, slow process of recovery.

Frightening the population into submission is not the way to get this country back on its feet again. It’s a way of sending everyone around the bend, of heightening existing divisions, of turning neighbour against neighbour, friend against friend.

And yet all we are getting from those who lead us is hysteria at a time when what we need is a cool, calm plan of action and a safe and steady hand.

What we must do is focus on better days to come, not lose ourselves ever deeper in the abyss.

We all know what needs to be done. Enough of the fear-mongering. Let’s just look to the future – and get on with it.

The streets are uncannily silent in my corner of West London, save for one sound: the screeching of bright green parakeets that flock en masse in the trees. There are calls to cull these ‘grey squirrels of the sky’, which some claim pose an ‘urgent economic, societal and environmental problem’. But I find their alien squawks and dazzling plumage perfectly suited to these strange, almost apocalyptic times. Leave the poor creatures alone.