SARAH VINE: The quiet sorrow of a ‘ships in the night’ marriage caused by the helter-skelter of modern life 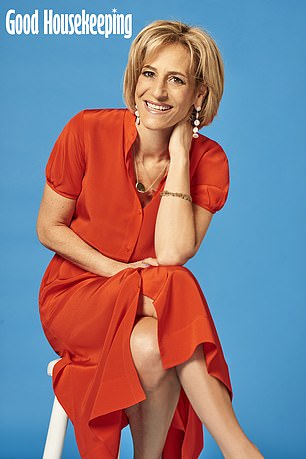 The Cambridge-educated star became the lead presenter on Newsnight in March alongside an all-female presenting team including Kirsty Wark and Emma Barnett. But her success has come at a price

Most people have never heard of Henry Wadsworth Longfellow, the 19th-century American poet, scholar and translator of Dante. But there is one fragment of his writing every-one will be familiar with, namely the phrase ‘ships that pass in the night’.

Isn’t there something timeless about the notion of us all adrift in isolation on the sea of life, with ‘only a signal shown and a distant voice in the darkness’?

It certainly struck a chord when the Newsnight presenter Emily Maitlis told a magazine earlier this week that she and her husband Mark Gwynne, an investment banker, are so busy with work commitments that inevitably they ‘don’t see enough of each other, we’re like ships that pass in the night, but it works’.

How many couples will have identified with that scenario? Rushing off in the mornings, struggling to get the kids to school, walk the dog, load the dishwasher, put out the bins with barely time to exchange a glance, let alone engage in meaningful conversation.

Then home late at night, exhausted, prioritising homework and washing, cooking supper, before collapsing onto the sofa, just enough energy left to climb the stairs and fall into bed.

You don’t have to be high-fliers like Maitlis and Gwynne either. Almost all marriages, all relationships, experience the same pressure in their different ways. We struggle to carve out meaningful time with our loved ones. We live life along parallel lines, reconnecting at weekends, holidays, Christmas and Easter, before clambering back onto life’s endless rolling stock.

‘Twas ever thus, as Longfellow reminds us. But there is something more acute about the phenomenon in the modern world. I honestly don’t think it has anything to do with more women entering the workplace — it’s just as easy to feel isolated from your spouse when one of you is at home all day and the other out at work. 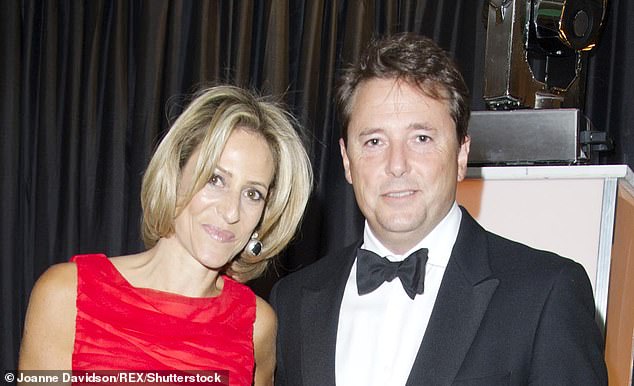 The 48-year-old proposed to husband Mark Gwynne, 53, an investment banker, while they were on holiday in Mauritius in 2000, and they married in December that year. The pair are pictured together in 2011

It is instead to do with the blurring of boundaries between work and home life, the way one seeps, inexorably, into the other.

Thanks to the internet and mobile phone, the working day begins the moment we wake up and check the device by our bed. And it doesn’t end until that final scroll of our emails while brushing our teeth before bed.

Where once the boss, colleagues, news were kept firmly in check by clear boundaries, now the outside world with all its troubles seeps into our every waking moment, sliding down optical fibres, following us wherever we go.

More from Sarah Vine for the Daily Mail…

And it takes its toll. It’s hard to have a normal conversation over dinner — if you’re lucky enough to be able to eat together — when the phone is pinging away.

Is it any wonder, then, that we are all increasingly ships that pass in the night? So few couples I know really interact with one another on a regular basis — talk, laugh, debate the big questions of the day, shout at the telly together, sit on a garden bench with a cup of tea and good book.

I know plenty of couples who exist side by side, not truly engaged with one another because the 21st century has turned our lives into a helter-skelter of long days and constant distractions.

My parents are probably the best example of a couple who really are deeply emotionally involved on all levels. They are always in each other’s pockets, which is probably the reason they’ve been married so long: more than 50 years and counting.

Call me a hopeless romantic, but that’s what marriage should be: two people with hearts and minds inextricably intertwined. Not ships that pass in the night, but a port for each other — come rain, shine or stormy weather. 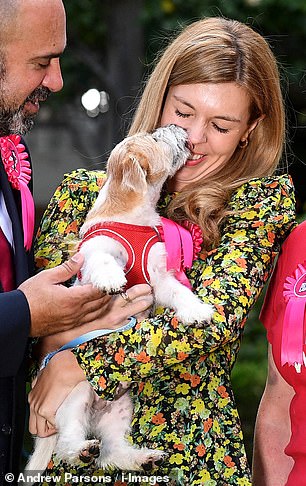 Will fur fly in Downing Street?

Much speculation over how Larry the No.10 cat will cope with Boris and Carrie’s new rescue puppy, the oddly spelled Dilyn. My guess is exactly the same way as every feline who has ever had to deal with a canine usurper: a flick of the tail, a sharp biff on the nose — and an abiding air of superiority.

More worrying is how the First Couple are going to cope with the inevitable toilet training, since the garden is several floors down via (if memory serves) a steep staircase at the back of No.11. The PM already has half the parliamentary party trying to mark their territory on his patch; he doesn’t need any more. 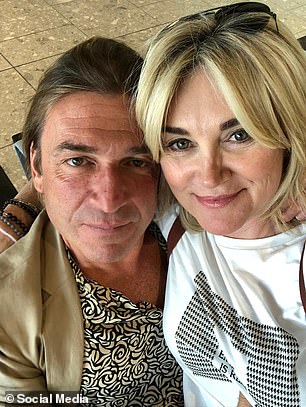 Its not speed dating Anthea!

No sooner does Anthea Turner announce her engagement — to ‘business tycoon’ Mark Armstrong — than stories of his wild past emerge (he bit a policeman after eating magic mushrooms and received a suspended six-week jail term).

But what I cannot understand is why someone like Anthea, whose last husband cheated on her, is so keen to tie the knot again, and especially after such a short courtship.

By all means, dream of a future together, Anthea, but don’t sign on the dotted line until that first flush of lust has subsided and you are absolutely sure he’s the right man. 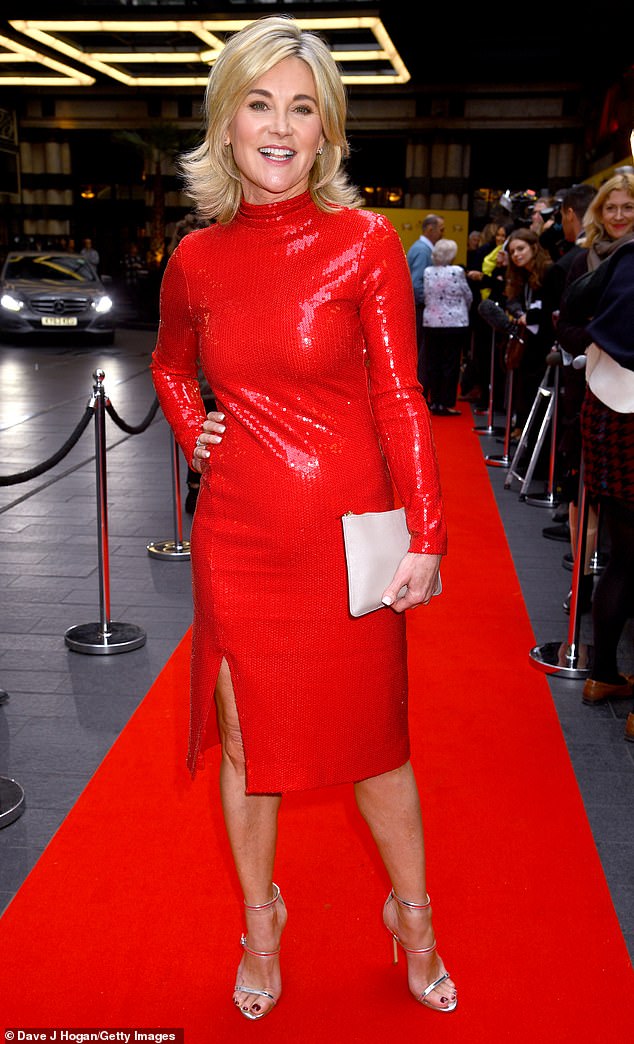 For the first time in decades, Marks & Spencer has fallen out of the FTSE 100 after a steady decline in its fortunes. It now has a market value of £3.6bn — less than half what it was worth in November 2015. Can anyone stop the rot? Well, I’m no expert, but I see its rival, Next, is currently valued at £7.9bn. Next’s outstanding chief executive is Lord Wolfson. There’s your answer.

More confusing advice for menopausal women. After last week’s U-turn on the previous U-turn about HRT increasing the risk of breast cancer, we are now informed that, in fact, the answer to all our prayers is . . . testosterone.

This is because, experts have concluded, it helps restore our flagging libidos (another of the many delightful consequences of the menopause).

The only snag is that potential side-effects include an increase in facial hair, acne — and raised levels of aggression. Which, one fears, might be somewhat counterproductive. 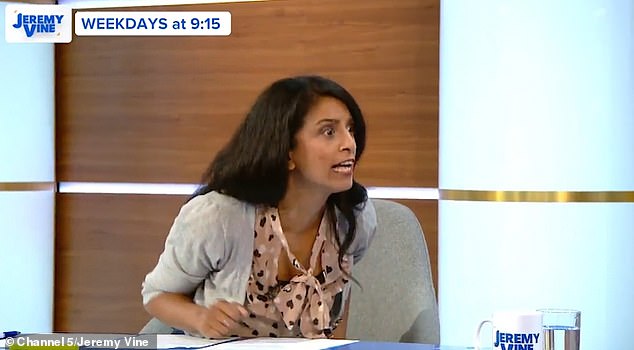 ‘Would you want Brexit to happen now if suddenly the new term was that everybody’s head gets chopped off!?’ shrieked former Blue Peter presenter Konnie Huq on Jeremy Vine’s Channel 5 show this week, before pursuing a deranged line of questioning of a fellow guest. There was only one person losing their head, and it was Konnie. I do hope she’s feeling better now.

I read with interest the news that St Helena in the South Atlantic is looking for a Napoleon impersonator to mimic its most famous former resident: someone of diminutive stature with an inflated ego, a total disregard for democracy and an irrepressible sense of his own self-importance.

Surely there can be only one candidate: John Bercow.

Like millions of parents, I spent most of Monday frantically scrabbling around looking for various bits of school uniform in preparation for the children going back yesterday.

But however annoying — and expensive — it may be, I don’t resent it. As Katharine Birbalsingh, the head teacher at an inspirational free school in Wembley, points out, not having a uniform merely ‘exposes the poorer or the less trendy kids’, making them feel inadequate.

‘Why embarrass them?’ she says, and she’s right. School is where you go to learn, not to flaunt the latest pair of overpriced trainers. 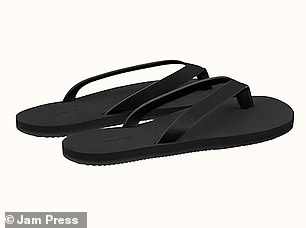 Hermes are selling £335 flip-flops, presumably on the basis that if people are stupid enough to buy them, why not flog them? The trouble is that if you debase your brand to this extent, you cease to be synonymous with timeless style, and end up as just another purveyor of overpriced tat. Just look what happened to Burberry.

I was deeply moved by Ruth Davidson’s decision last week to stand down as leader of the Scottish Conservatives to spend more time with her family. As parents, we have such a small window of time to be with our children.

Politics, by contrast, will never grow up. It will still be there, childish as ever, when Ruth is ready to come back.