A Romany Gypsy has claimed her children have had to leave three schools due to racist abuse, as she speaks out over the shocking extent of racism her family continues to suffer.

Mother-of-two Charmaine Abdul-Karim, 32, from Nantwich, is a member of the Romany Gypsy community in the town, but said discrimination has devastated her and her families lives.

She revealed she was left with PTSD after receiving racial abuse while she was giving birth, telling Cheshire Live: ‘A midwife said to me during a difficult labour where my son’s cord was wrapped around his neck, “Your kind of people just want to come in, push other people out and steal everything”.’

The mother-of-two also claimed the abusive treatment has even been extended to her children, Nayno and Donna, forcing them to have move schools three times. 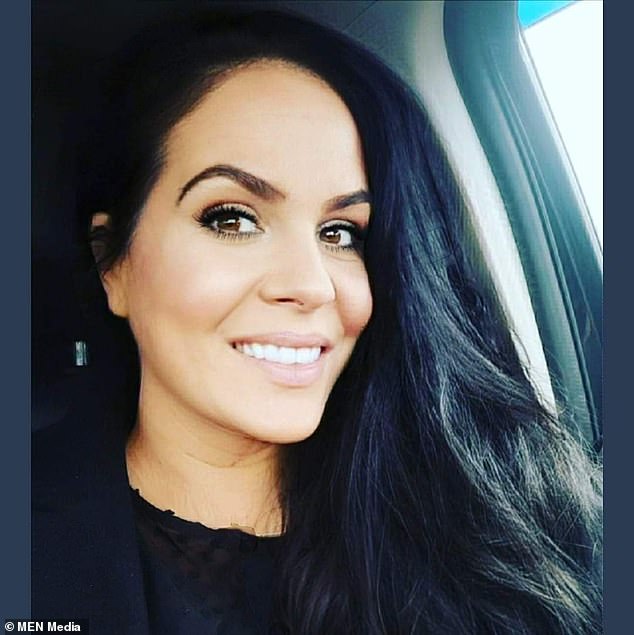 Mother-of-two Charmaine Abdul-Karim, 32, from Nantwich, has claimed her children have had to leave three schools due to racist abuse, as she speaks out over the shocking extent of racism her family continues to suffer.

She explained:  ‘It happens in all walks of life. My birth experience was particularly traumatic.

‘One of the biggest things that can happen in a woman’s life is to give birth.’

She said she was left with Post Traumatic Stress Disorder after a midwife criticised her community during labour.

Meanwhile Charmaine’s discrimination also extended to the workplace and she has been forced to resign from several jobs as a result of racist treatment. 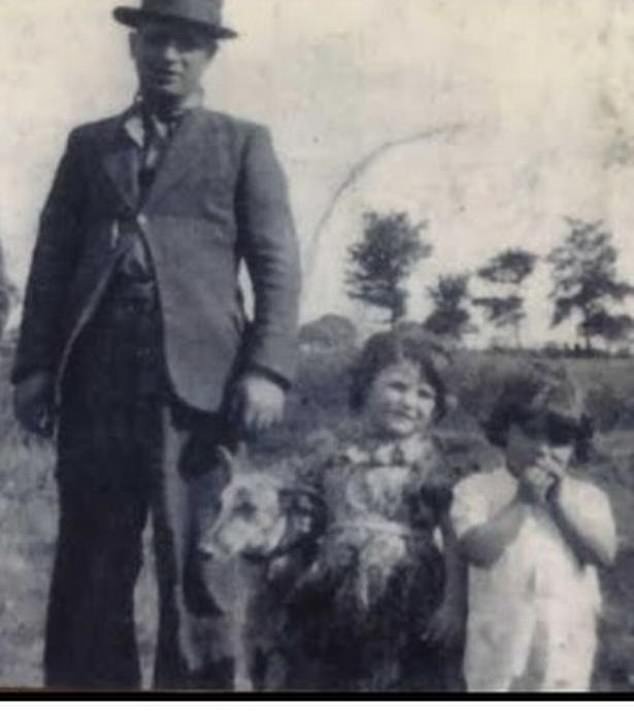 Charmaine now wants to educate others about Romany Gypsy life and said the group have been part of the Nantwich community since the 1700s (pictured, Charmaine’s grandfather William Rogerson on  Sound Common in Nantwich) 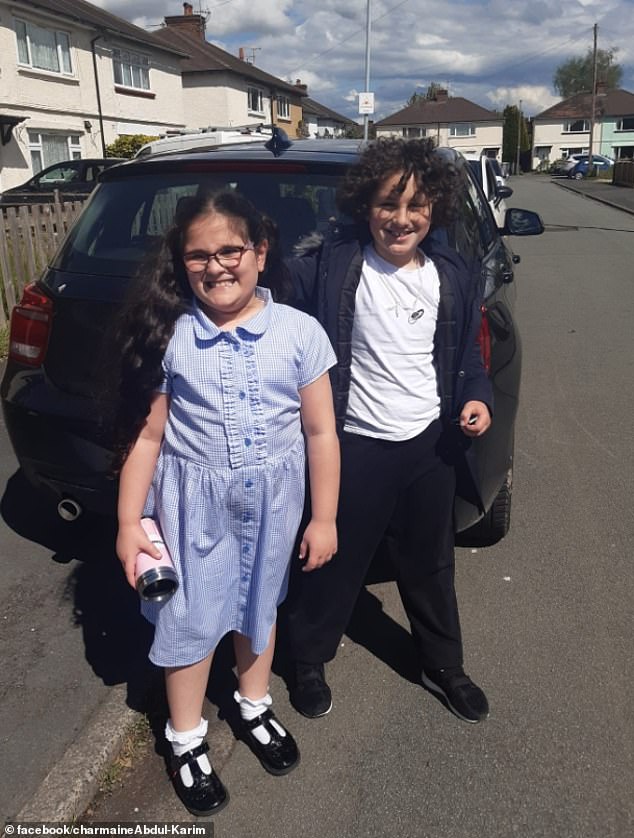 The mother-of-two also claimed the abusive treatment has also been extended to her children, forcing them to have move schools three times (pictured, Nayno and Donna Ameera)

What is post-traumatic stress disorder (PTSD)?

People with PTSD often suffer nightmares and flashbacks to the traumatic event and can experience insomnia and an inability to concentrate.

Symptoms are often severe enough to have a serious impact on the person’s day-to-day life, and can emerge straight after the traumatic event or years later.

PTSD is thought to affect about one in every three people who have a traumatic experience, and was first documented in the First World War in soldiers with shell shock.

People who are worried they have PTSD should visit their GP, who could recommend a course of psychotherapy or anti-depressants, the NHS say.

She said: ‘I was working at a very large wedding venue near Nantwich and colleagues would go to my manager saying I was a gypsy and I was not to be trusted because “gypsies are thieves”.

‘I had to leave after feeling extremely unwelcome.’

The mother-of-two added: ‘My children have had to leave three schools as  a result of racist bullying, one headteacher even did a social services evaluation without my knowledge which was very distressing.

‘Another situation where an ambulance had to be called, the school staff were more interested in telling paramedics that my family were ‘travellers’ rather than helping.’

Complaints to Cheshire East Council fell on deaf ears when it was suggested the school might benefit from some cultural compliance training.

Yet, there are huge amounts of people working in these sectors from the Gypsy Romany Traveller community.

They are forced to do so anonymously for fear of discrimination.

Charmaine said: ‘We are one of the few communities where it seems acceptable to still be racist towards, despite being an indigenous people to this country.’

‘We are fighting against a system that is abhorrently racist, and what is happening now with anti-trespassing laws is basically ‘forced assimilation’.’

The 42-year-old also said social media and online abuse is playing a big role in the rise of discrimination and racism towards the Romany community.

She added: ‘This abuse is having a terrible effect on Romany children in schools and colleges everywhere and it filters down into schools and workplaces.

‘The social media companies should be doing much more to stop it, and be held accountable.’ 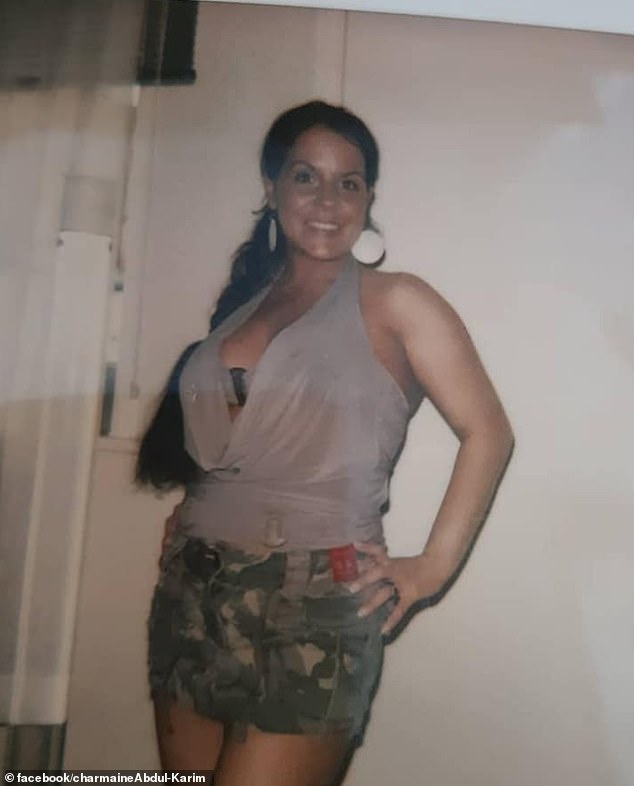 Meanwhile the mother-of-two revealed she had suffered racist abuse throughout her life, and said she was left with Post Traumatic Stress Disorder after a midwife criticised her community during labour 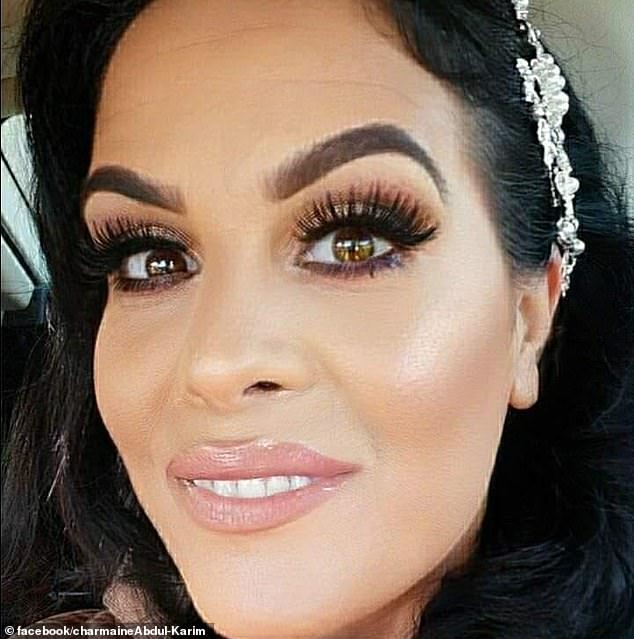 Charmaine now plans wants to work with Cheshire East Council and build bridges with the community to help foster a greater understanding of the Romany Gypsy community, encourage integration, and stamp out racism.

LIVING ON THE MARGINS OF SOCIETY FOR CENTURIES

Roma is a term for various groups who have migrated across Europe for centuries and are now the biggest ethnic minority in the European Union, most of them from countries like Romania, Bulgaria and the Czech Republic.

There are an estimated 10 million across Europe and one in five lives in Romania.

Since their arrival in Europe from India some 700 years ago, they have been politically, socially, culturally and economically marginalised by the dominant population, who have consistently shown negative social attitudes towards them.

The vast majority live on the margins of society in abject poverty, which makes them easy targets in troubled times.

British Gypsies of the Romanichal and Kale Romani groups have lived in the UK since the 15th century.

The first Roma from the new EU countries, particularly from the Czech Republic, Poland, Romania and Slovakia, came to the UK in the 1990s seeking asylum to escape persecution.

Since the enlargement of the EU many more have moved legally to the UK to find work, equal opportunities and a good education for their children and to escape racism and discrimination.

She believes the illegal encampments cropping up in the area are due to the local authority not having enough permanent and tranist gypsy and traveller sites.

She explained: ‘We want to work with Cheshire East Council to arrange for one more permanent site and one more transit site and we are more than willing to help in any way possible to get these two sites up and running.

‘So far the local authorities have not provided us with enough sites, so it is no wonder that illegal encampment sites pop up as there is not enough space for us.

‘We believe in community unity and we are part of the Cheshire East community, we’re not going anywhere and we have every right to be here.’

The mother-of-two is also planning a community engagement meeting with members of the Nantwich and wider community.

There will also be a host of exhibitions and resources available including photographs and documents of the ‘Gypsies of Nantwich’, the Dikhlo collective and artworks from Elijah Vardo.

Charmaine added: ‘Our tribe has origins in Northern India, but we have been part of the Nantwich community since the 1700s.

‘I don’t think people in Cheshire East realise that the Romany Gypsy community live among them and we’re not the stereotype that people think.

‘We have our children in school, our young people do have jobs.

‘We have got so much to give to this community, and we don’t like anti-social behaviour as much as the wider community.

‘We want to work with the community and start an education programme where they can find out more about our community to help break down barriers.

‘This will be the first meeting of its kind where the public sector and wider community can obtain a healthy and better insight into our very often marginalised ethnic minorities.’