Australia must have a national discussion about reducing risks to lives and property from increasingly frequent and severe national disasters, including government-funded buybacks of at-risk homes, says Emergency Management Minister Murray Watt. 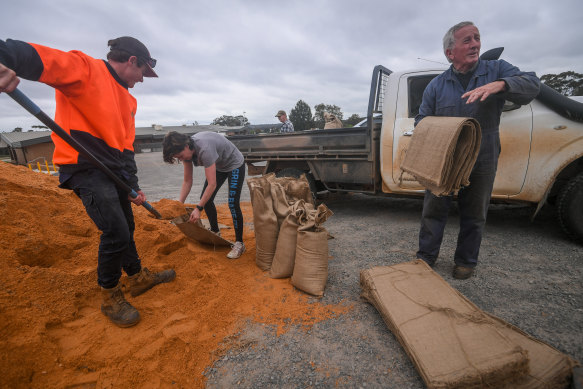 Residents of St Arnaud, Victoria fill sandbags to prepare for the threat of flooding in the coming days.Credit:Justin McManus

Large swathes of inland NSW are inundated and there are currently 70 flood warnings across the state. Victoria’s Emergency Management Commissioner is warning the state to brace for a “campaign flood event” which could last for more than a month and emergency flood warnings are also in place for Tasmania.

“The obvious answer is to stop development on flood plains,” Albanese said.

“Wherever possible buybacks would be done on a voluntary basis. Obviously, it’s better for communities if people want to go,” Watt said.

“It’s a pretty graphic example, that it’s in homeowners’ interests to think about moving if they’re in very dangerously flood-prone areas. “We’re not talking about relocating every home, you know – whether it be in Lismore or the Hawkesbury or anywhere else – but the areas where it’s happening time and time again.”

John Trowbridge and John Berrill, who authored the Natural Disaster Insurance Review in 2011 that led to a $10 billion taxpayer-backed underwriting scheme in northern Australia, said there’s a risk of insurance “market failure” across the country due to soaring premiums for homeowners and costs for insurers.

They say the escalating financial cost of natural disasters under climate change should spur the federal government to create a publicly funded national insurance scheme to keep premiums affordable.

Watt said insurance was becoming “unaffordable or unavailable” in disaster-prone regions across the country.

“I’ve been struck by the number of people I’ve met in disaster areas where this is an issue,” he said.

Labor made an election commitment for a $200 million annual fund for disaster mitigation and Watt says states need to stump up their share of the co-funding.

The funding will be aimed at upgrading bridges, flood levies evacuation centres and other infrastructure, as well as firebreaks to protect communities that will inevitably have bushfires bearing down on them in the future.

Watt said the government is “seriously looking” at programs to make homes more resilient to disaster, like raising and improving flooring, as well as buybacks. But such schemes are expensive and achieving buy-in from the community is challenging “so we can’t rush into that”, he said.

Voluntary home buybacks and relocation to safer ground were offered to the roughly 600 residents of Grantham in southeast Queensland, following the 2011 floods that claimed 12 lives and destroyed many buildings. Most of the town relocated but about 50 homes remained in place.

“All the people who moved and were relocated in Grantham were not affected by these floods, the small number of people who remained were flooded again,” Watt said.