RICHARD LITTLEJOHN: We need a steady hand on the Tiller… It’s time to kick this woke nonsense into touch, once and for all

As a former high- kicking Tiller Person, Betty Boothroyd will have had first-hand experience of sexual harassment.

Given that her day job was prancing around in sequinned knickers, with 30-odd similarly scantily attired young women, it came with the turf. 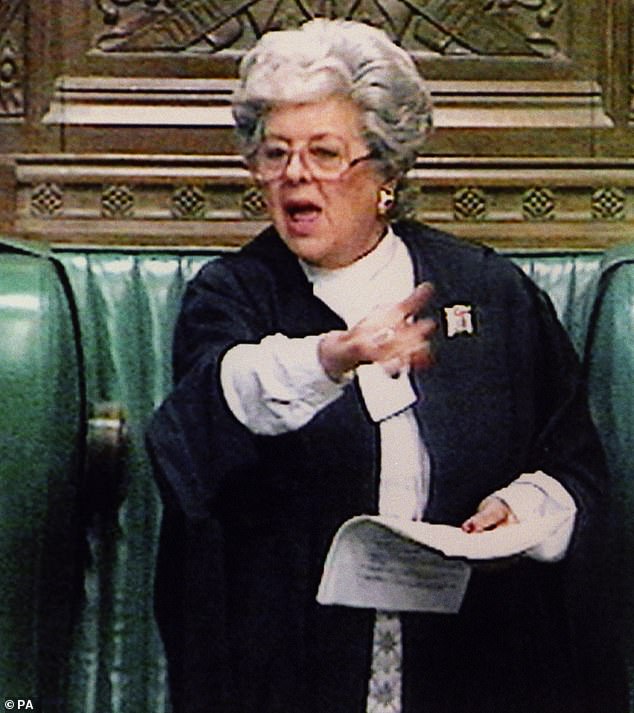 Having watched the no-nonsense way in which Betty dealt with unruly MPs in her later incarnation as the first female Speaker of the Commons, one can only imagine that any male admirer unwise enough to pinch her bottom — put his hand on the Tiller, so to speak — would have been repelled with a swift kick in the unmentionables 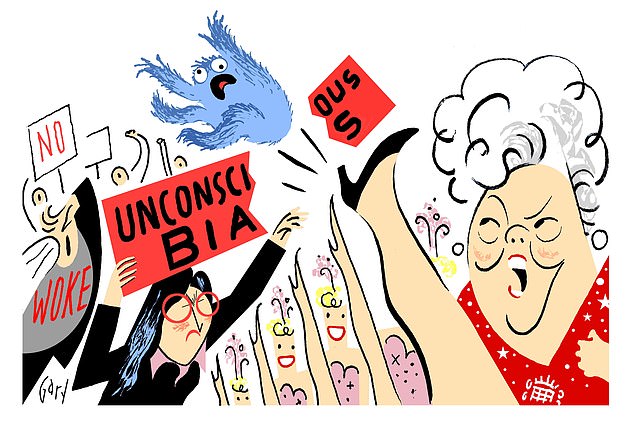 Baroness Boothroyd, now 91, is one of a number of peers currently under investigation for not attending an online Valuing Everyone session, designed to raise awareness of sexual harassment

Somehow, though, you can’t see the redoubtable Miss Boothroyd dissolving in tears every time she was propositioned by a lecherous magician or found herself on the receiving end of a wolf-whistle from a Black and White Minstrel.

Having watched the no-nonsense way in which Betty dealt with unruly MPs in her later incarnation as the first female Speaker of the Commons, one can only imagine that any male admirer unwise enough to pinch her bottom — put his hand on the Tiller, so to speak — would have been repelled with a swift kick in the unmentionables.

For younger readers, I should explain that the Tiller Girls (as we’re not allowed to call them any more) were a popular dance troupe who enjoyed their heyday in the Forties, Fifties and early Sixties.

Think of them as a forerunner of Pan’s People, with Betty Boothroyd, who was a member from 1946 to 1952, as a post-war prototype of Beautiful Babs.

Her showbiz career was cut short by a foot infection and she decided to go into politics. The Palladium’s loss was Westminster’s gain.

Working at first as secretary to the fiercely feminist Barbara Castle, she was elected as Labour MP for West Bromwich in 1973, rising to become Speaker in 1992. When she stood down eight years later, she was elevated to the Lords.

Politics has always been a hotbed of male chauvinism — even, perhaps especially, on the Left — so Betty will have suffered her fair share of patronising and off-colour remarks over the years, all of which she will have shrugged off with characteristic aplomb.

So you would have thought she would be the last person who needs to be sent on a sensitivity training course. Yet Baroness Boothroyd, now 91, is one of a number of peers currently under investigation for not attending an online Valuing Everyone session, designed to raise awareness of sexual harassment.

She has a valid excuse, as she’s currently recovering from open-heart surgery and is shielding at home. Betty says she doesn’t ‘indulge in Zoom’. (Quite right, too. Me, neither. It always makes you look like an extra from the Blair Witch Project. What’s wrong with the telephone?)

That hasn’t stopped her being referred to the Parliamentary Standards Commissioner. If found guilty of refusing to take part, she could be kicked out of the Lords.

While the session is voluntary for MPs, it is compulsory for peers.

Not just why is it compulsory, but why is the Upper Chamber being compelled to endure a turgid training course peddling trite ‘woke’ propaganda? And why are taxpayers being forced to foot a £750,000 bill for this nonsense? The outfit running the brainwashing sessions is called Challenge Consultancy, which specialises in ‘equality and diversity’ training.

I thought the name rang a bell. Regular readers may remember that last September I wrote about Parliament bunging them seven grand to lecture MPs on ‘unconscious bias’. The lessons were being conducted by consultant Femi Otitoju and a giant Muppet-style blue puppet.

At the time, I suggested replacing the entire Cabinet with Muppets — Miss Piggy taking over from Priti Flamingo at the Home Office, and Kermit at Environment. After all, it’s not easy being green.

Since then, the game has obviously moved on. Muppetry is the order of the day, otherwise how else would they have ended up threatening disciplinary action against Betty Boothroyd — one of our most distinguished, open-minded politicians — for not taking part in what amounts to a pseudo-Maoist re-education programme?

It’s not as if Parliament hasn’t got anything else to worry about, even at the tail-end (hopefully) of a now, mercifully receding pandemic which has wreaked havoc on the economy and everyday life.

Why the hell are they obsessing about this drivel and not challenging daily the destruction of our civil liberties by a craven Government in thrall to not just ‘the science’ but totalitarian ideologues determined to rewrite our history and stamp out freedom of speech?

Betty Boothroyd’s generation came through a far worse crisis, World War II, with their sanity intact and determined to dance their way into a better future.

The current crop of politicians have been consumed by insanity, their judgment skewed by Covid into swallowing revisionist, intelligence-insulting concepts of social justice, from the blatant intimidation of neo-Marxist Black Lives Matter agitators to the man-hating garbage pumped out by opportunist, post-feminist harridans.

So much so, that we’re paying a fortune to ‘consultants’ who insist that even the word ‘girls’ is offensive and should be erased from the lexicon of ‘acceptable’ language.

Enough already. Bring back Betty and the Tiller Girls. It’s time to kick this woke nonsense into touch, once and for all.

No one out here in the real world is talking about Desperate Dom or Allegra or the rest of them picking the fluff out of Downing Street’s navel.

Sacking Cummings was, however, a mistake. I can only assume Boris is not familiar with LBJ’s policy on tents.

Loved the story in the Mail on Sunday about inmates at HMP Peterborough being allowed to decorate their cells in their favourite colours. The walls in the one pictured were shocking pink.

Can’t help wondering what Norman Stanley Fletcher would have thought.

Come on you spivs!

Since you asked, and many of you did, the truth is I agonised long and hard about ripping up my season ticket at Spurs.

Then I watched what some of us still call the League Cup final, largely in the same way some motorists slow down to watch a car crash on the other carriageway.

It wasn’t just the crass sloganising in the stands either side of the tunnel — as if a naughty schoolboy had just been forced to write out 100 lines: I must not be a racist, today or any other day.

Nor was it all the different logos the players were wearing — everything from second-hand car salesmen ‘sleeve sponsors’ to virtue-signalling NHS badges — which made them look like Formula One racing drivers.

It was the fact that Spurs —the Lilywhites — were sent out in vile green and pink shirts, even though there was no clash with Man City’s sky blue, just so that Little Daniel could try to shift some of the hideous, superfluous ‘third kits’ cluttering up his cashless superstore on the High Road.

Come On You Spivs!

The late, great Keith Waterhouse, once of this parish, had a nice line in ridicule when it came to euphemism. After someone decided ‘disabled’ should be replaced with ‘differently abled’, Keithy wrote a spoof column about Noddy and his sidekick, Socially Challenged Ears.

Sadly, this would be lost on the purse-lipped half-wits at the Leonard Cheshire charity, which has just declared terms such as ‘able-bodied’, ‘epileptic’ and even ‘blind’ to be ‘offensive’. Able-bodied is a statement of fact. Yet the charity insists that this should instead be ‘non-disabled’.

Then again, they also allege that 14 million people in Britain are ‘disabled’. No, they’re not, unless you include everyone with a stammer and an ingrowing toenail. The list of banned words has been compiled in conjunction with a rapper (non-singer?) called Kray-Z Legz (real name: Mark Humphries), who has spina bifida, and is not to be confused with the legendary Krazee-Eyez Killa from Larry David’s Curb Your Enthusiasm.

Heaven knows what Leonard Cheshire VC, the war hero who founded the organisation, would make of this lunacy.