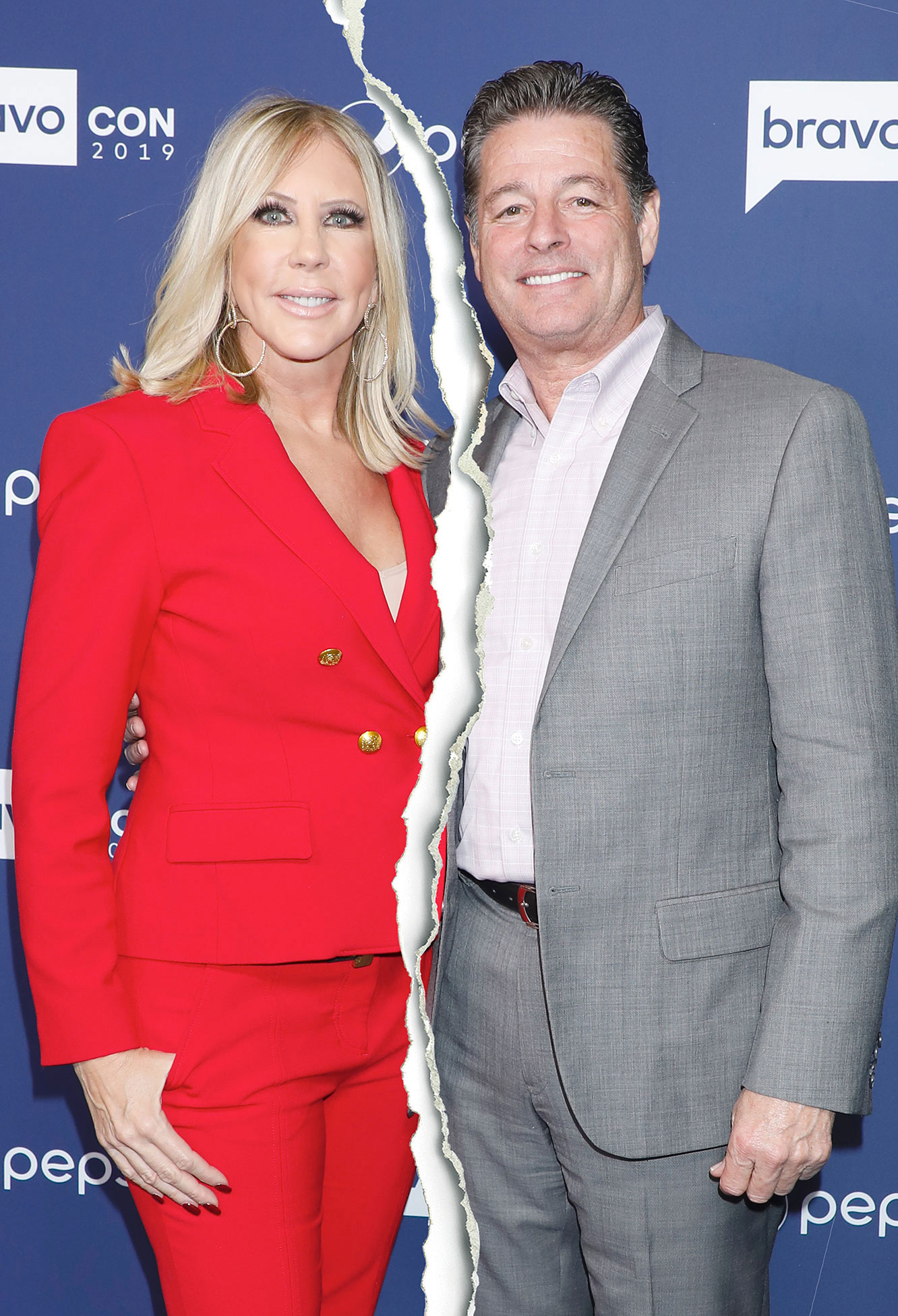 It’s over! Vicki Gunvalson and Steve Lodge have ended their two-year engagement, Us Weekly can confirm.

“Steve broke up with Vicki while she was filming the [Real Housewives] spinoff show in the Berkshires,” a source exclusively tells Us. “After he told her this, she was traumatized. It ruined her. She didn’t want to be at the [Dorinda Medley’s] house anymore.” Us previously confirmed that Gunvalson returned to Bravo to film season 2 of its mashup series, which began filming earlier this month.

The Real Housewives of Orange County alum, 59, is “still a mess” and is “not OK” after the breakup, the insider adds.

“She’s in terrible shape. She still loves him,” the source says, explaining that Lodge, 62, has moved out of Gunvalson’s home. “They had not been getting along for a long time. He seemed disinterested in her for a very long time.”

The OG Housewife began dating Lodge in 2016 in 2016 after meeting at a charity event. The businessman pulled off an “incredibly intimate and perfect” proposal three years later at their home.

“He cried and I cried,” Gunvalson exclusively told Us in April 2019. “I was like, ‘Steve this is just perfect. Let me see the ring!’ He showed it to me and it’s incredible. It’s almost flawless. 5.5 carats. It’s literally perfect. It’s gorgeous. He did it right.”

The “Reality With Vicki” podcast host called Lodge a “class act,” noting he made sure to call her two kids — Briana Culberson and Michael Wolfsmith — and his four children before getting down on one knee.

The pair planned to tie the knot in April 2020 but postponed the nuptials amid the COVID-19 crisis.

Six months later, Gunvalson shut down split speculation after some fans noticed that the duo didn’t follow each other on social media.

“[We] live together and live a very private romantic life,” the TV personality told Us in October 2020. “We don’t follow each other on social media and haven’t for a long time, and we don’t post photos of each other — what’s the point? This is a complete joke and not worth even commenting, but I did.”

As the new year began, Gunvalson revealed that she wasn’t in a rush to walk down the aisle again, despite being engaged for more than one year. (She was previously married to Michael J. Wolfsmith from 1982 to 1991 Donn Gunvalson from 1994 to 2014.)

“We’re not wedding planning at all. We’re not in that place of wedding planning,” the Bravo star exclusively told Us in January. “It’s my third marriage, Steve’s fourth, so we’re not going to do wedding [stuff]. But right now, we’re pausing everything. There’s no need to.”

She explained “we don’t need to get married” because Lodge has his own money, and she is also financially stable. “We’ll see what happens. There’s no rush,” Gunvalson added.

Ahead of their split, Lodge announced in June that he was running for governor of California amid the state’s recall of sitting governor Gavin Newsom.

His then-fiancée showed support for his run via Instagram, writing, “You got this honey ❤️🔥👏.” (The recall was ultimately unsuccessful and Newsom, 53, retained his title.)

Former ‘RHOC’ Stars: Where Are They Now?

Gunvalson, for her part, has been focused on her family the past few months as her 34-year-old daughter prepares to welcome her fourth child with Ryan Culberson. The couple already share sons Troy, 8, Owen, 7, and Hank, 10 months.

After the twosome announced in August that they are expecting, Gunvalson’s son-in-law slammed her for revealing the sex of the child before they did.

“You ever get really good news and then find out your mother-in-law ruins it?” the former marine, 37, said in an Instagram Story video earlier this month. “Well, that happened to me today. Oh yeah, we’re having a girl.”

Ryan’s shade came after his mother-in-law shared a sneak peek of the pair’s baby reveal without their permission. She quickly deleted the teaser, but not before a fan account saw it and reposted it.