The Princess of Wales stunned in a scarlet Jenny Packham gown as she stepped out at Buckingham Palace alongside the Prince of Wales for the annual Diplomatic Corps reception this evening.

Kate, 40, dazzled in the gem-embellished dress from the favoured British fashion designer and the Lotus Flower Tiara as the Royal Family welcomed diplomats to the London residence while the wait for the Duke and Duchess of Sussex’s Netflix docuseries intensified.

The mother-of-three joined the Prince of Wales, also 40, King Charles, 74, and Queen Consort Camilla, 75, for the first Diplomatic Corps reception in three years as they greeted hundreds of guests at the glittering affair.

It comes after Meghan and Harry were spotted for the first time since their incendiary Netflix trailer — as they arrived in New York by private jet to accept an award for their ‘heroic’ stand against ‘structural racism’ in the Royal Family.

The Sussexes, who were pictured yesterday, are set to receive a human rights award at tonight’s The Ripple of Hope gala, where tickets are selling for up to $1million (£847,000). Previous winners include Joe Biden, Barack Obama and Hillary Clinton.

The Royal Family is braced for further attacks from Meghan and Harry when the first episode of their ‘explosive’ Netflix series is released on Thursday. 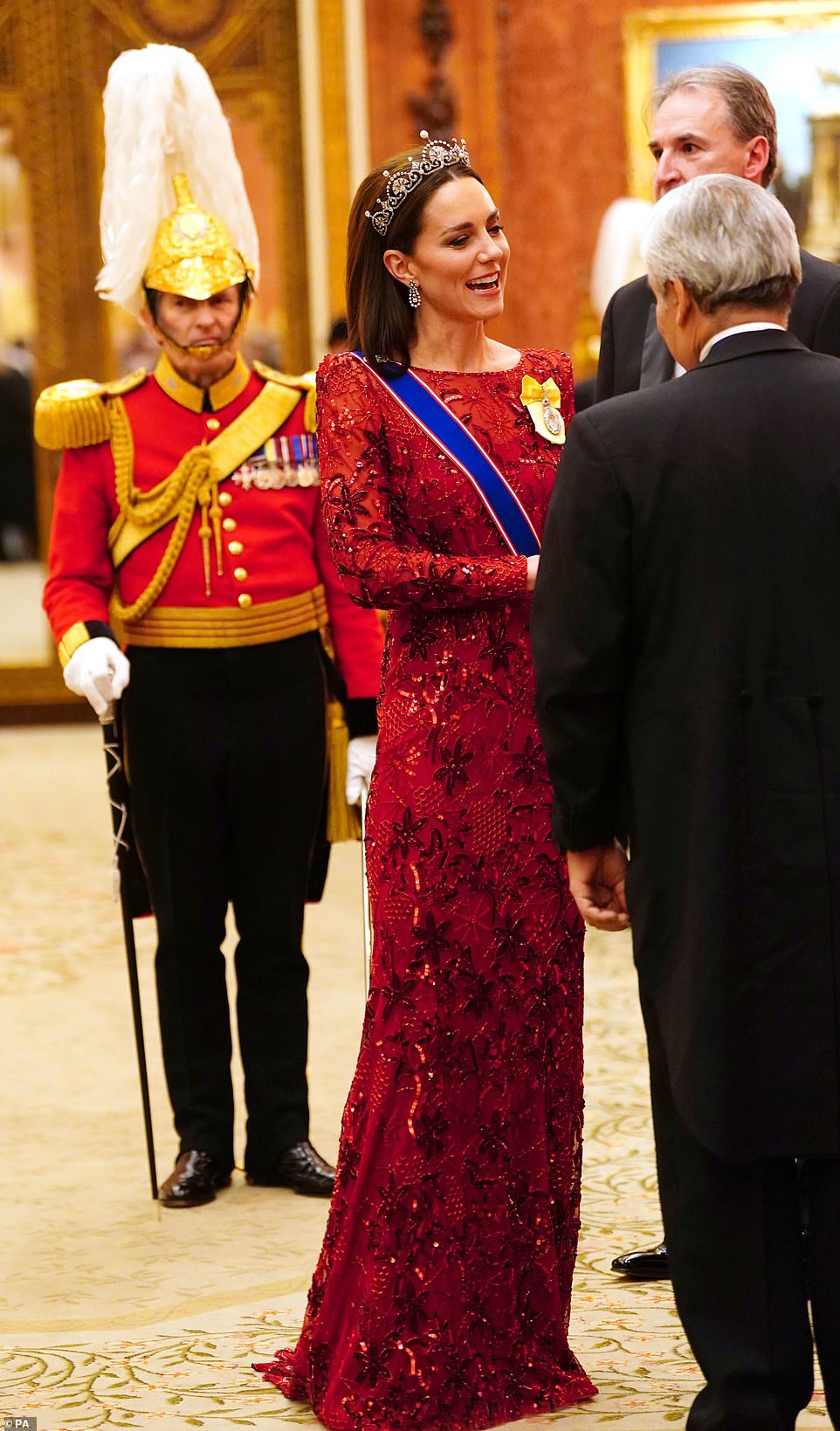 The Princess of Wales, wearing a red lace dress by Jenny Packham with the Lotus Flower tiara she has on occasions worn before, speaks to guests inside the palace 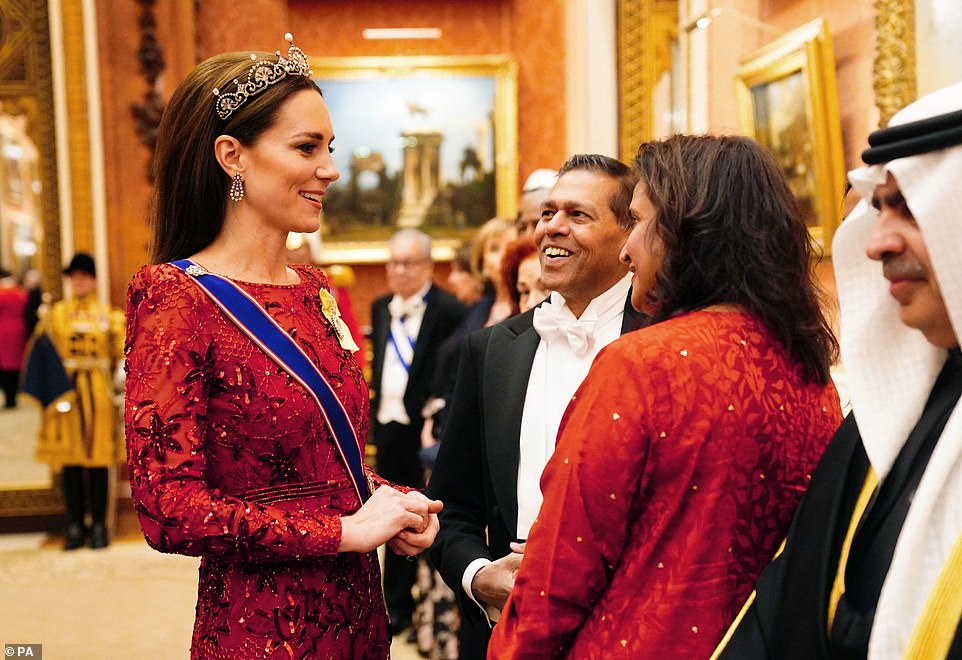 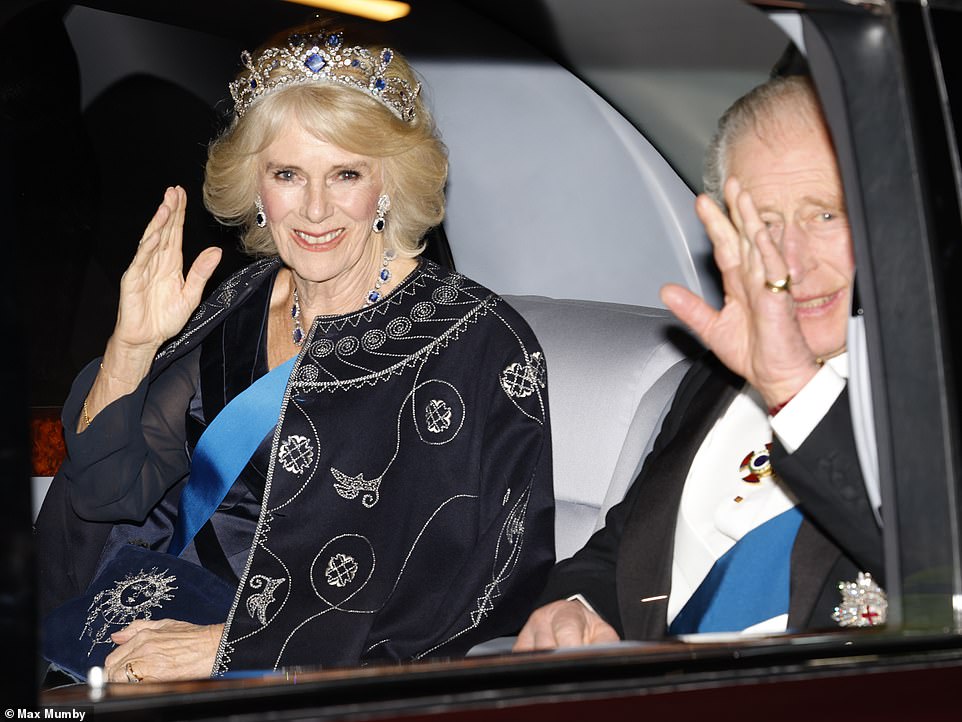 Earlier, the Prince and Princess of Wales looked loved up as ever in heart-warming behind-the-scenes Instagram snaps taken at this year’s Earthshot Prize awards ceremony in Boston.

The royal couple, both 40, appeared to channel Prince Harry and Meghan Markle – who recently shared a slew of intimate photos in the explosive trailer ahead of their documentary later this week – in theatrical black and white shots.

Mother-of-three Kate was effortlessly elegant in an off-the-shoulder dress, with her chestnut tresses cascading down her back; she was snapped walking along in the figure-hugging ensemble, which featured a slit along the back.

Meanwhile, another intimate shot captured the two standing next to each other, with William’s arm around his wife, while a second showed Kate clapping for her husband as he spoke at the podium. 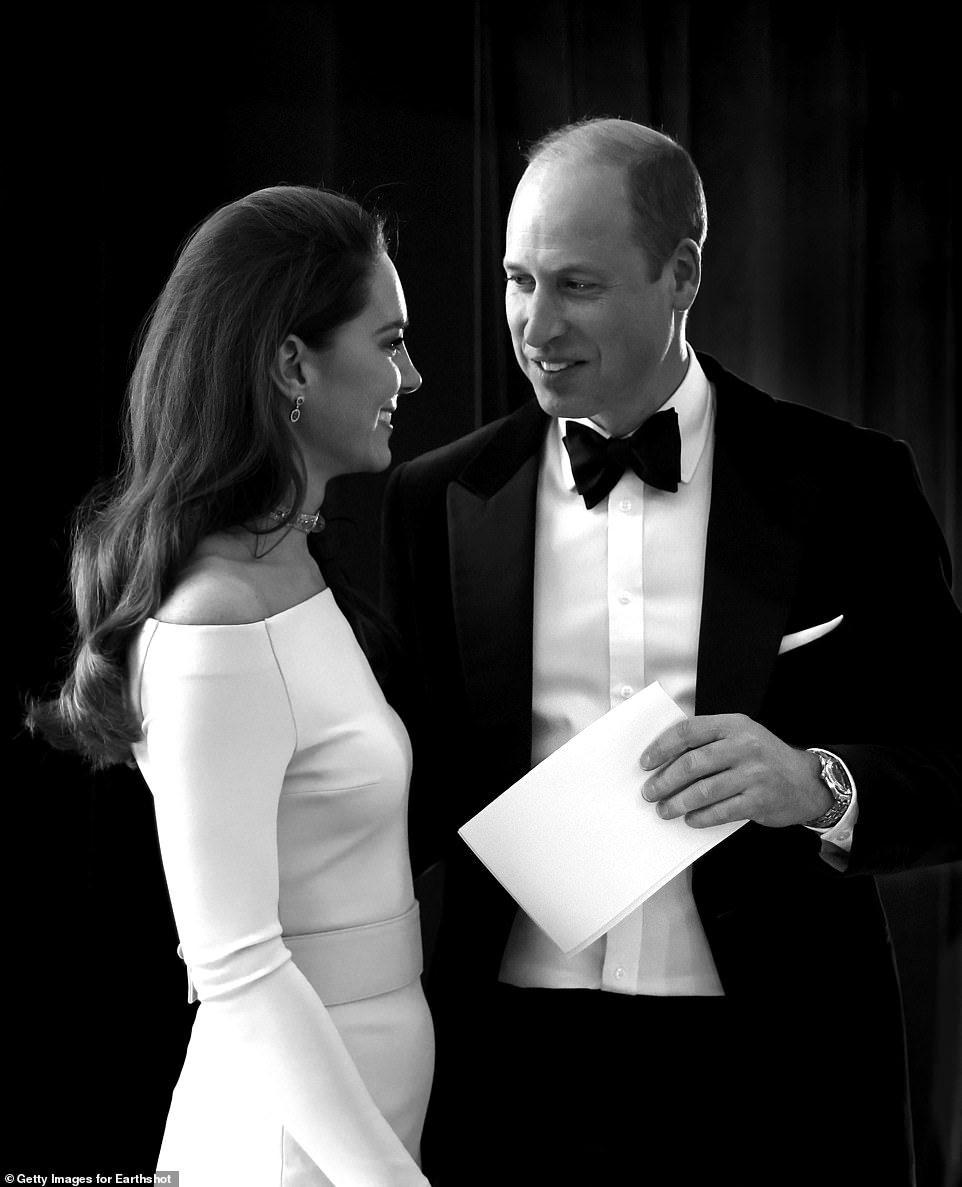 Meanwhile, the black and white photographs of Kate show her accessorising with a glamorous choker that was previously worn by her mother-in-law Princess Diana and chic earrings. 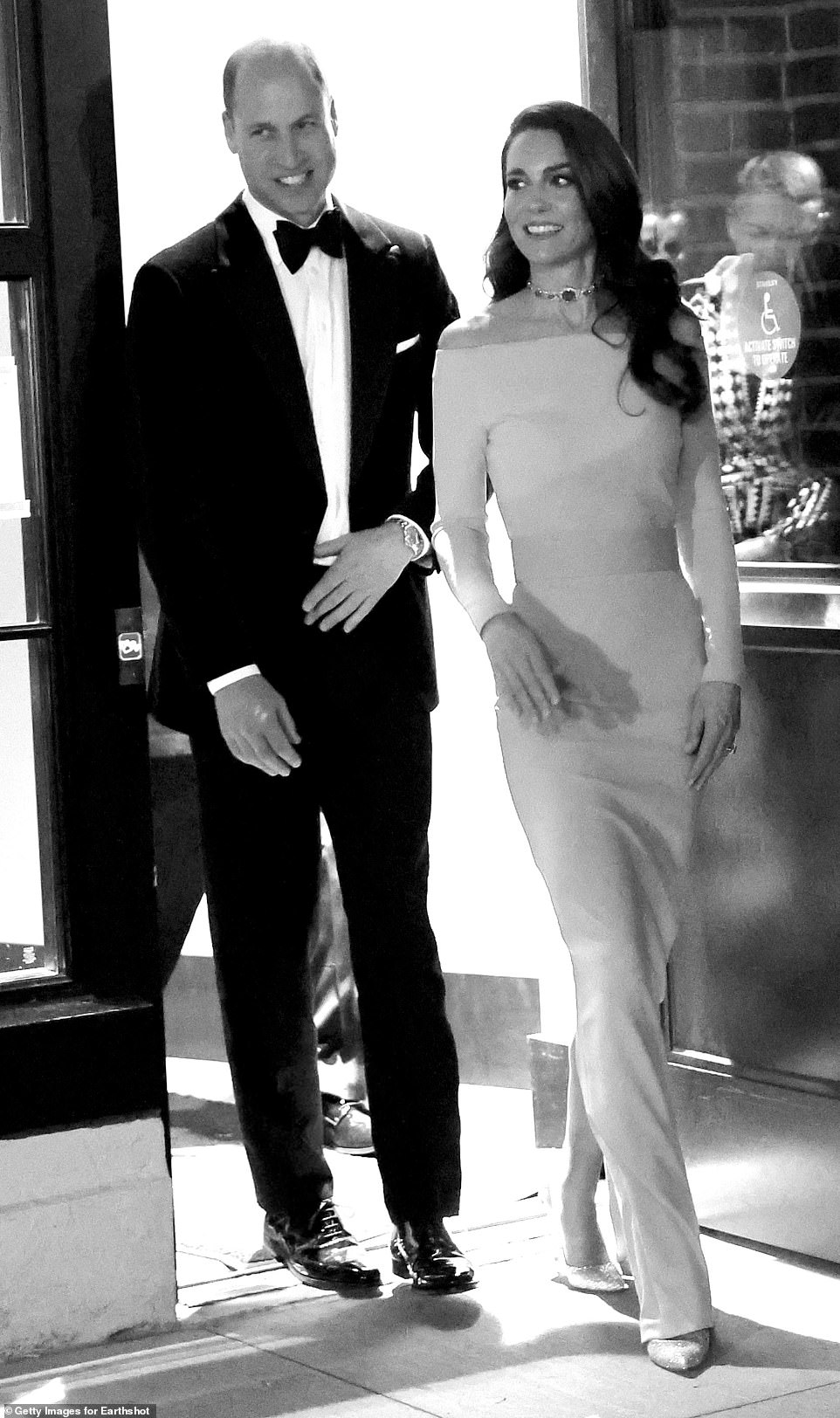 Sharing the carousel to their royal Instagram account, the couple (pictured) wrote: ‘Celebrating brilliant solutions and the inspiring people behind them!’ 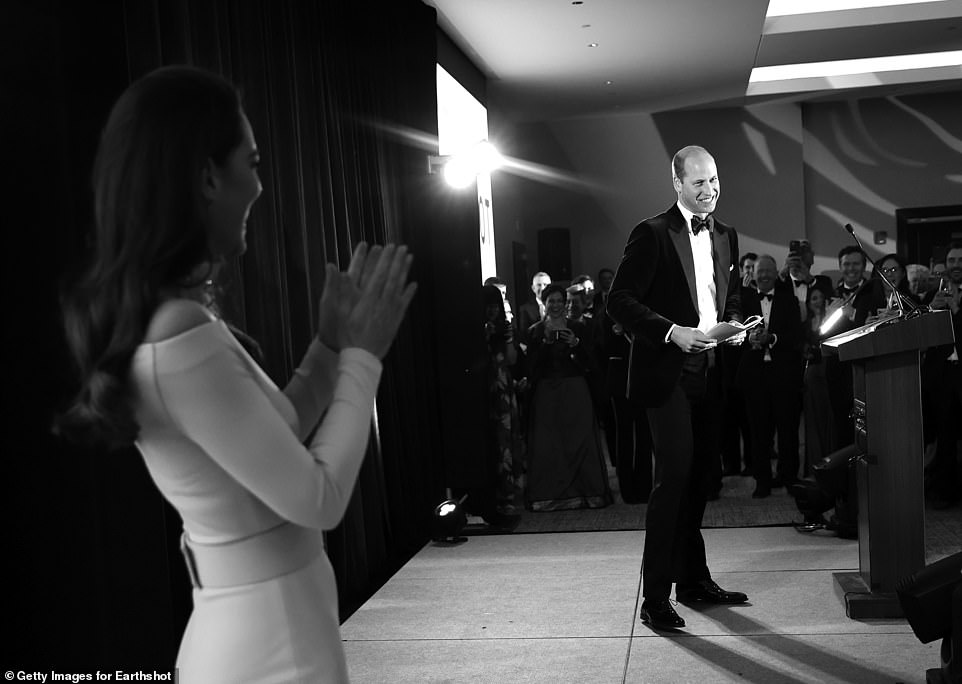 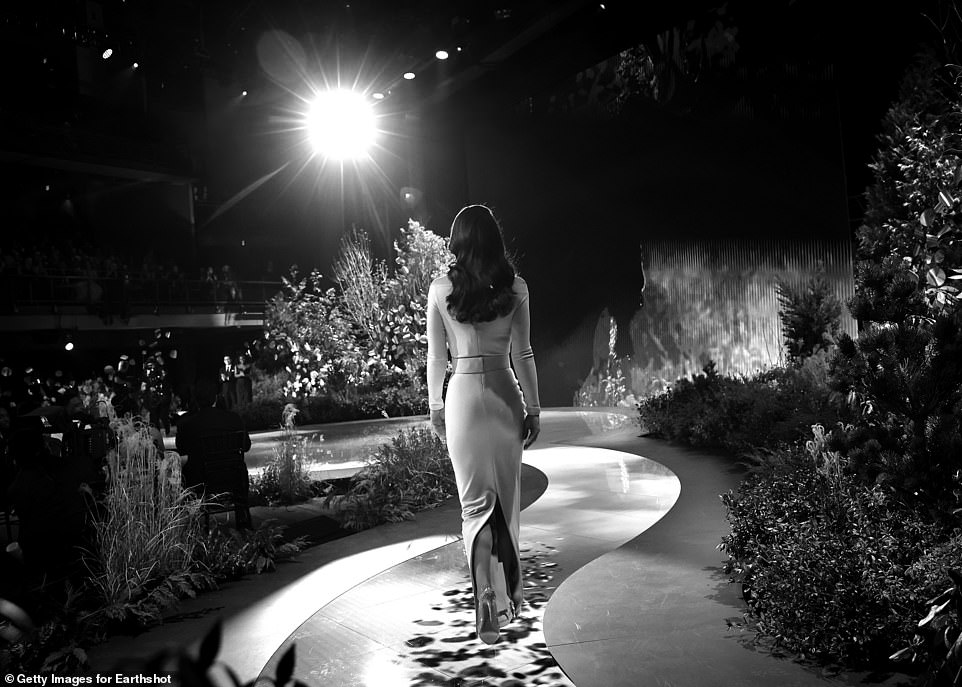 Kate, 40, was effortlessly elegant in a creamy white dress which exposed her shoulders, chestnut tresses cascading down her back

Sharing the carousel to their royal Instagram account, the couple wrote: ‘Celebrating brilliant solutions and the inspiring people behind them!’

The Earthshot Prize has long been a passion project of Prince William’s, who launched it in 2020 to come up with solutions to climate change.

The ceremony marked the end of a whirlwind tour in Boston, where the couple made an impressive impact on the US media.

The Boston Herald said the future Queen ‘dazzled’ at the award ceremony, while People Magazine stated that she stunned the crowds in her glamourous outfit, stealing the spotlight with the ensemble.

The New York Post went on to describe the ceremony as a ‘home run’ for the future King and Queen.

However, the couple were not warmly greeted everywhere they visited on their three-day trip, with the pair being booed by a few onlookers while they sat courtside to watch the Boston Celtics basketball team take on Miami Heat earlier this week.

A New York Times article also added fuel to the flames after documenting Bostonians’ reactions to the royal couple’s visit, concluding that it was, at best, indifferent.

The piece quoted one woman saying that she ‘[didn’t] care’ about the royal visit, while another said there was ‘no chatter’ about the visit in local bars and clubs as to be expected.

Another man was quoted as saying: ‘I said to my wife this morning, I put my pants on the same way he does – why is he so special?’ while others were documented as complaining about the potential traffic jams the visit would cause.

Despite the reception, Kate was seen looking relaxed as she made a solo walkabout at Harvard University after speaking to experts at The Centre on the Developing Child.

She was heard saying that the people of Boston had been ‘so friendly’ to her and her husband on their short trip, telling well-wishers she was ‘so appreciative’ of people coming to greet her.

Certainly, William and Kate needed the trip to go off without a hitch. While much pressure was already being placed on the gala, that weight increased tenfold in the wake of the controversies that overshadowed the couple’s US tour.

Before the couple had even touched down in the US, a furious race row had erupted in the UK after the Prince’s own godmother, Lady Susan Hussey, was accused of making racist comments to black British domestic abuse campaigner Ngozi Fulani at a Buckingham Palace event.

Then on, the first full day of their tour, Harry and Meghan dropped a trailer for the bombshell Netflix documentary, which hinted at fresh attacks on the Monarchy – and was described by insiders as a ‘declaration of war’ on the Waleses and the royal family. 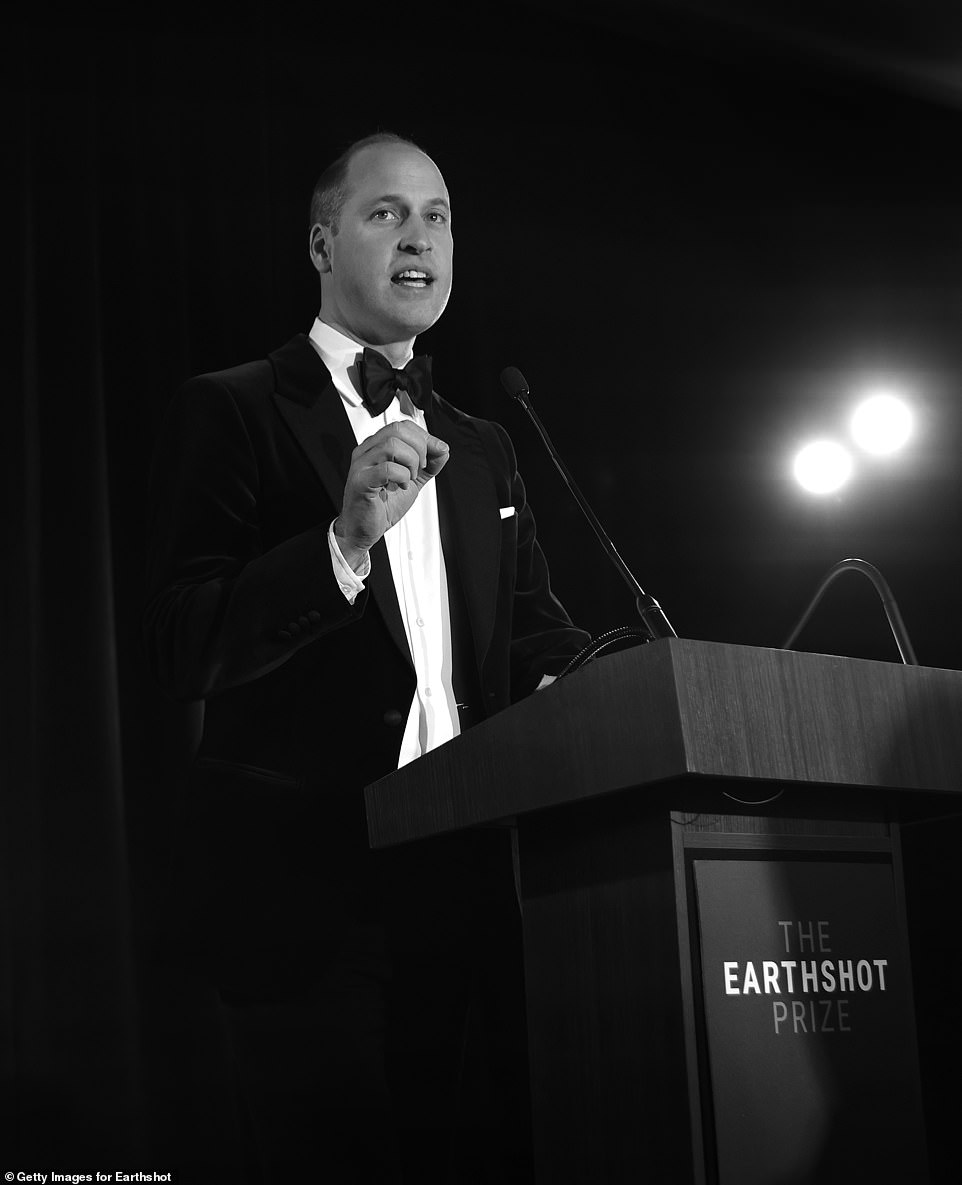 William, 40, looked dapper in a sophisticated black suit and matching bowtie during the ceremony

The teaser dispelled any hopes that the Sussexes are willing to work towards a ceasefire in their acrimonious battle with the Royal Family.

The California-dwelling couple will have to look to the future after the release of their explosive Netflix docuseries this week, and the Duke of Sussex‘s memoir release in January, a royal author has claimed.

Valentine Low, who penned Courtiers: The Inside Story of the Palace Power Struggles, told Lorraine Kelly he thinks the Montecito-based Duke and Duchess of Sussex ‘can’t carry on being that couple complaining about the past’.

The royal correspondent also added that the Prince of Wales’ camp is ‘tired’ of Harry and Meghan’s media campaign, and there is ‘absolutely no chance’ of a reconciliation between the two brothers and their wives. 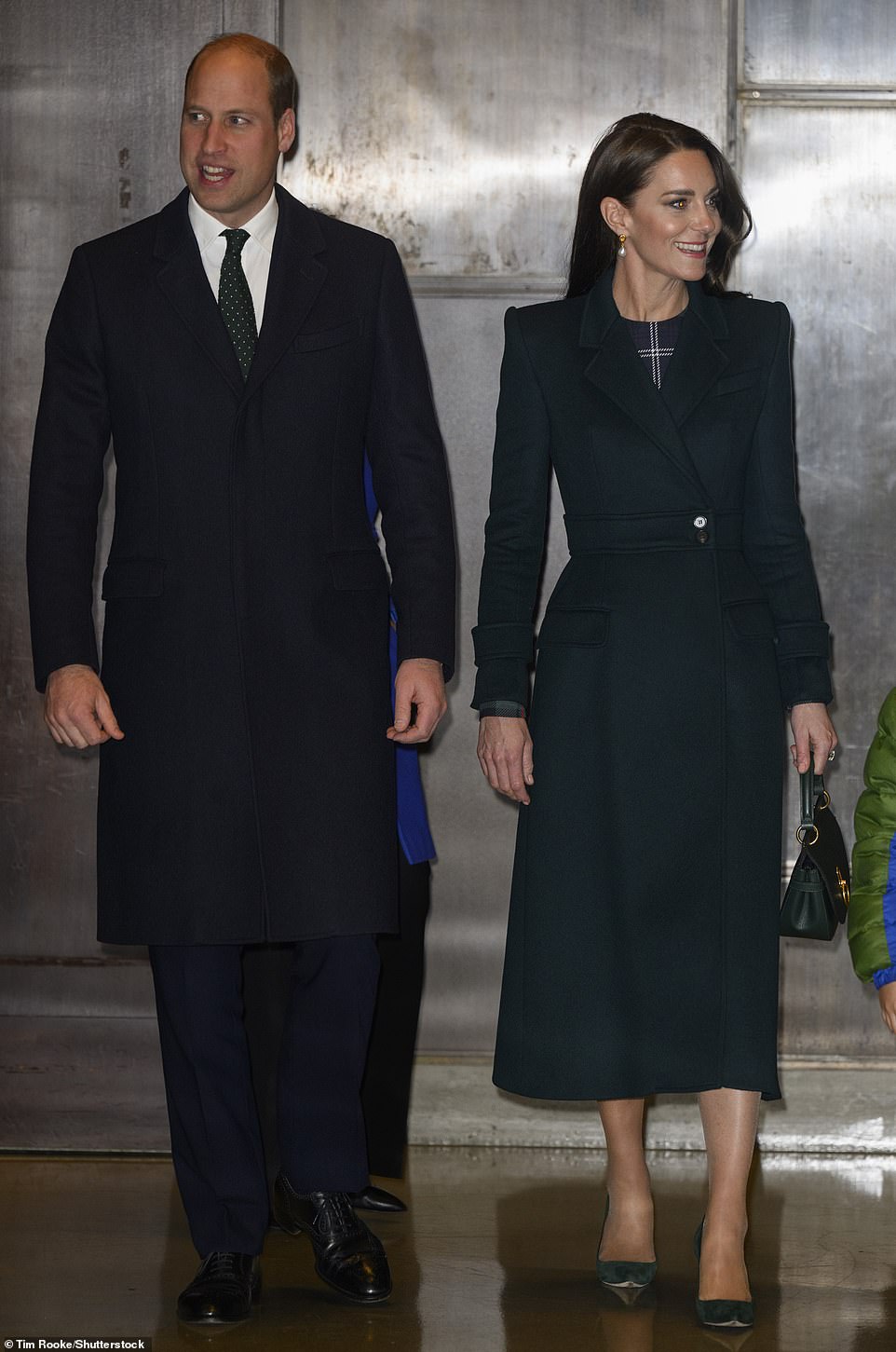 The ceremony marked the end of a whirlwind tour in Boston, where the couple (pictured at Boston City Hall) made an impressive impact on the US media

Despite this, reports claim that senior family members plan ‘business as usual approach’ amid turmoil over Harry and Meghan documentary.

If you enjoyed this story…

We’ve pulled together everything you need to know about Harry and Meghan’s Netflix documentary ahead of its release on Thursday.

Also, the Prince and Princess of Wales are seen beaming in a never-before-seen wedding photo, shared online by a fan.