There's a saying in journalism that when a dodgy situation might be explained by either cock-up or conspiracy you should assume the former. But a pair of American documentaries on the streaming services – one about the very upper echelons of society, the other about the very lowest – suggest conspiracies still have their place.

The Family (Netflix) is a five-part series that asserts a cabal operates near the top of US government, with the goal of installing one of its own in the White House and, beyond that, of getting its hands on the levers of power globally.

Yes, it sounds like every crackpot conspiracy theory trucked by the not-so-alt-right, but in place of shadowy Masons and Jews we have here an affiliation of Christians. They are predominantly white and male (members of a female affiliate are trained, essentially, to serve these would-be masters of the universe) and their brand of religion is somewhere between arch-conservative and matter of convenience.

Young men are recruited to live in a shared house in Washington called Ivanwald, where they are inculcated into "the Fellowship" (as it is also known) through vague assertions of faith and vaguely homoerotic grapplings of bodies (submission plays a key role in initiation). The idea that they have been chosen to lead is instilled, and pathways to making the most of that calling open up via the network of men in or close to power who have been similarly groomed.

The series is based on two books by journalist Jeff Sharlet, who joined this community in 2002. The central conceit of the docu-drama (there are lots of glossy re-enactments, with James Cromwell – Farmer Hoggett in the Babe movies – playing Doug Coe, head of the group for 50 years until his death in 2017) is that the Family operates by stealth, changing its name, hiding its membership and pulling strings invisibly but to great effect. 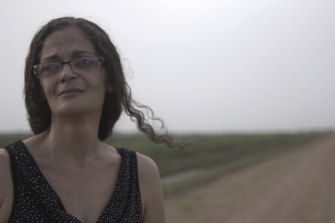 Teresa Gary, mother of one of the eight murder victims, in Stan’s Murder in the Bayou.Credit:Showtime

That thesis is somewhat undercut, though, by the fact Sharlet was known to be a writer when he joined, and seemingly took notes openly. It's also hard to tally the secretive nature of the group with the fact it is the chief organiser of the National Prayer Breakfast, a major annual event at which the President speaks and to which invitations are eagerly sought.

Still, for all its unanswered questions and contradictions, The Family does paint a convincing portrait of a network of like-minded, self-congratulatory egotists working together to ensure they and only they get to call the shots. The fact this network has connections to Australia is certainly cause for at least mild concern.

Networks of the powerful also lurk behind the scenes in Murder in the Bayou (Stan*, new episodes Saturdays), a five-part true-crime investigation about the unsolved murders of eight young women between 2005 and 2009 in Jennings, a town of 11,000 people in Louisiana.

This, too, is based on a book by an investigative journalist, Ethan Brown, who serves as writer and producer; a local journalist who covered the story as it was unfolding, Scott Lewis, is an interview subject and associate producer.

There's a great sense of injustice and unfinished business about the series, which puts it in a similar space to Making a Murderer, the Netflix series about the prosecution – some might say persecution – of Steven Avery. But it also has strong echoes of the Southern Gothic genre in filmed drama, and for me evokes season one of True Detective and the Fox Showcase series Sharp Objects.

That's partly about the visual language (the series looks amazing), but chiefly it's because of the enormous gap between the wealthy and the dirt poor, even in a town as small as Jennings. The sense that this is a microcosm of America at large is impossible to ignore. There are two worlds here, two sets of laws, two notions of what a life is worth.

Keeping it that way, you suspect, is anything but a cock-up.

*Stan is owned by Nine, the owner of The Sydney Morning Herald and The Age