Forensic crime scene technology is being used to trawl the freshwater streams of eastern Australia for the elusive platypus, which despite centuries of study holds secrets that still remain a mystery to modern science.

Already struggling for survival due to habitat loss, pollution, feral predators and water extraction, platypuses were pushed further towards the brink by the devastating 2019/20 bushfires that scorched their habitat and spewed river-clogging ash into their streams. 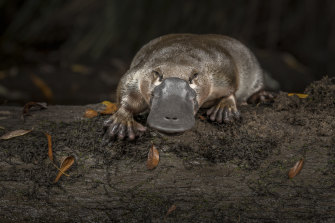 The shy platypus lives in burrows, feeds when it’s dark and dives into the water at the sight of people.Credit:Doug Gimesy

Scientists desperately need to know exactly where platypus are in the wild to save the best habitat and boost populations.

But finding the shy, largely nocturnal creature in all the myriad waterways where it could potentially live has proved impossible. Until now.

Cutting-edge DNA technology can identify microscopic traces of animals in water samples taken from the wild. Technological advances since its inception six years ago have seen costs plummet, opening opportunities for scientists like Josh Griffiths, senior wildlife ecologist at research company Cesar Australia, who is spearheading a research partnership to track platypuses in NSW and Victoria.

“Platypus are just incredibly difficult to see and to study in the wild,” he said. “We know generally the kind of areas that they are, but only on a large scale.”

Animals “shed” DNA through their faeces, skin and hair as they move through the environment, which is particularly handy when flowing water can tell scientists kilometres downstream that platypus are present somewhere along a creek line.

“It’s similar to what a detective would do at a crime scene, but we’re doing the same thing in the wildlife space,” Mr Griffiths. “It’s completely revolutionised the way that we can collect data on this species and do it at a scale that we’ve never been able to do before. And that’s what’s needed for these wide-ranging species.” 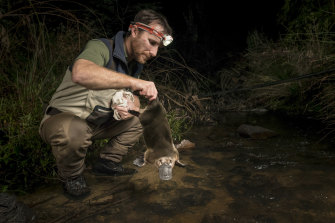 Platypus researcher Joshua Griffiths returns a male platypus to a creek after it was captured as part of a study.Credit:Doug Gimesy

“Locating the platypus remains one of the barriers to supporting its recovery – that is why four of the seven projects will use environmental DNA,” Ms Ley said. “Three projects will look to protect their river habitats by trialling new structures in riverbanks that improve water quality and limit soil erosion.”

Ecologists have estimated the platypus population declined from an already low base by about 30 per cent in the past 30 years. Now, platypus’ conservation status may be downgraded to threatened.

Platypus live across Victoria, Tasmania and up and down the eastern seaboard. Along with echidnas they are the only two animals left on earth that carry the ancient monotreme lineage of egg-laying mammals.

Uniquely among land animals they use electro-location to sense prey and retain the reptilian trait of legs located on the side of their bodies, rather than underneath like other mammals.

Mr Griffiths said platypuses are so enigmatic they can live near suburbia undetected, which he discovered a couple of years ago while working with a local environment group to find platypuses in north-west Sydney. 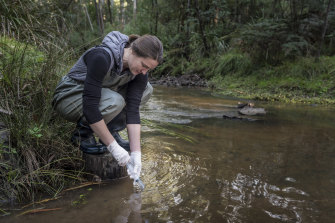 Platypuses “virtually disappeared” from western Victoria during the Millennium Drought at the start of the century, Mr Griffiths said, but tracing the environmental DNA over the past five years has enabled targeted conservation measures to get maximum bang for buck.